One of the most challenging works for the bassoon in the orchestral literature is the Ravel Piano Concerto in G Major.  It appears on many bassoon audition lists, although the specific movements vary.  Some orchestras ask for the first movement only; some ask for the third movement only.  Most ask for both.

Some bassoonists use a special high note bocal for a high solo like the one in the Ravel first movement:

I am not one of those bassoonists who switches bocals, for this or any other solo.  For me, that's just too much fussing around.   However, I do switch reeds for extreme solos like this one.  Although I can play the solo on a regular reed, it sounds better on a reed which favors the high range.

HOW TO MAKE A HIGH REED

I know there are bassoonists who claim they can make a high reed, and they can even explain how they do it.  Those methods have never, I repeat, NEVER worked for me.  But fortunately, high reeds just appear in my life from time to time.  I can't say whether high reeds are caused by certain density variations in cane, or quirks of construction, but I just know that high reeds crop up when I least expect them.  They tend to be higher pitched in general, and difficult to play.  They don't vibrate as well as other reeds, and the crow of these reeds is resistant.  If one of these reeds plays high Es or The Rite of Spring easily, then I let it dry and then store it in an airtight container until I need a high reed.  I even have a special zip-lock bag reserved specifically for Shostakovich 8 reeds (reeds which easily attack high E flat, or E flat 5).

When played in the orchestra, the tempo of the above solo is usually not very strict - it's rather laid back.  Just listen to the accompaniment and watch the conductor, and it will be easy to place each note.  This solo definitely benefits from intonation practice.  I like to set up the tuner to produce a drone on E and play the solo against it, and afterwards I check the pitch of each note on a meter just to be sure.  Of course it's a big deal to get the high E in tune, but the high C# and high B are often problematic as well.  Be aware that the temperature of the stage where you perform may affect the pitch of your reeds.  In my case, the stage temperature is usually hot, and so my reeds play higher.

In my opinion, this solo should be played out, with as big a sound as possible.  I've never had a conductor ask me to play less on this solo, and it's so easy for the bassoon to be drowned out by the rest of the orchestra.


This is the Orchestre National de France, Charles Dutoit conducting, with pianist Martha Argerich.  It's definitely a French orchestra, and the bassoons are French bassoons.  However, these players exemplify the trend in which French bassoonists are attempting to sound more like German bassoons.  This trend disappoints me, since I am quite taken by the sound and lyricism of a real French bassoon.

Later in the movement there is a tricky passage in which the notes can be challenging to place accurately:

It's wise to prepare prior to the first rehearsal by practicing the 32nd note passages with the metronome at many different tempos.  Then you'll be ready for whatever tempo the conductor presents at 25.  Usually this is conducted in 3, so set your metronome accordingly.  During the rest between the two 32nd note passages, it's very easy to lost track of what's going on, thus compromising the accuracy of the second entrance.  It's advisable to learn the horn solo so that the second entrance is obvious based on what the horn player does.  If the horn player gets off, you're covered, whereas any woodwind colleagues who were relying on counting (as opposed to listening) may be left in the dust.

These notes go by rather quickly, and must be well practiced so that they sound smooth and even.  Because of the more famous solos in this piece, it's easy to neglect this difficult passage.

And what about the second movement?  There's an oft-forgotten solo there too:

Every second bassoonist knows about the solo at the top of the page, beginning on B#.  Intonation is tricky and can benefit from private rehearsing with the English horn player, who plays the solo line for the first 4 bars.  Then the 1st bassoon takes over from the English horn in the 5th measure. I like to pretend I'm an English horn player during that passage, starting the E4 at the same dynamic as the English horn finished with, and matching the English horn player's vibrato.  Conductors often like this passage to be very expressive, as someone seems to have scribbled in the rental part pictured above.  It works well to have the volume and vibrato both intensify in the middle of the 4 bar phrase, and to begin and end very subtly.

There are a few different ways to perform the famous 3rd movement bassoon lick: 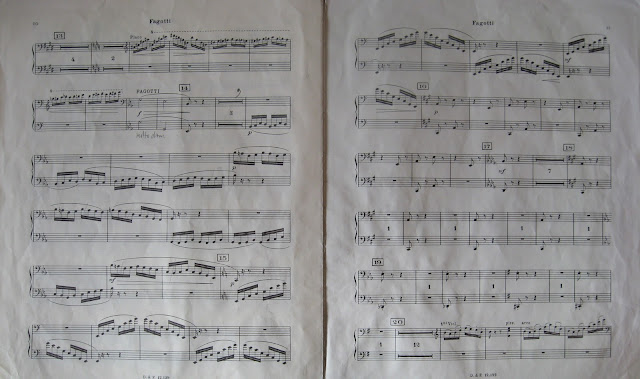 It can be performed as written, or with the 1st bassoon playing the whole passage alone, or with both bassoonists playing the entire passage.  I've done it all 3 ways, and I'd say that the least successful was the one time I played it as written.  For some reason, at such a fast tempo, it's hard to coordinate 2 players, and the two players usually sound quite different from one another.

The first time I played it, shortly after I was hired by the Columbus Symphony, I remember how unspeakably frustrating it was to practice this passage.  I was ready to toss the bassoon out the window.  The more I practiced it, the worse it sounded!  Back then, I didn't have any history with this piece, so I think I was somewhat flipped out.  (What if the performance didn't go well?  Would I fail my probationary period??)

Now, with a few performances of this concerto under my belt, I know I can do it, but it's still extremely daunting.  It makes total sense to me for the first bassoonist to play the entire passage (either alone or with the second bassoon playing in unison) rather than trading back and forth as printed.  In auditions we are expected to play the entire passage, combining the first and second parts.  That's what we're used to, so why not play it that way in the orchestra?

Preparing the above passage is no different from any other as far as practicing techniques.  I slow it way down (quarter = 60) and aim for smoothness and ease.  Sometimes I practice it with altered rhythms.  But the important goal is to slow it way down.  Once it becomes easy and 100% reliable at a slow tempo, it's no problem to tackle faster tempos, since the finger motion between consecutive notes is the same regardless of tempo.  I like to practice it at a wide variety of tempos so that I'm prepared for anything, up to around 165.

There's one more passage to consider, a few bars before the end of the concerto:

This is exposed, fast and best played with a truly growling fortissimo so that it can project - the perfect last word from the first bassoon!