Igor Stravinsky (1862-1971) wrote his Octet in 1922-3 during his early Neo-Classical period.  At this stage of his career he was abandoning his "Russian phase" which had brought us such works as The Rite of Spring and The Firebird.  His Neo-Classical.works (which never caught on with audiences to the degree that his Russian phase works had) combined a formal, structured compositional style with modern sounding harmonies, rhythms and counterpoint.  (His third and final phase of composition was his serial period, in case you're wondering.)

Stravinsky himself conducted the 1923 premier of the Octet at the Paris Opera House, since he had disliked Serge Koussevitsky's conducting of the premier his earlier work Symphonies of Wind Instruments.
Apparently Stravinsky stated that "there is no interpretation" for the Octet, and that's part of the reason he insisted on conducting it himself (so that it wouldn't be ruined by a conductor's interpretation of a piece which requires no interpretation!).  What he meant by that, I think, is that he had been so clear in his markings (including metronome markings) that all that was necessary was for the performers to follow his instructions.  Here is a recording (divided into 2 parts) of Stravinsky conducting the Octet:

It's unusual for bassoonists to have the opportunity to perform the octet on an orchestral subscription series, but luckily for me, the Stravinsky Octet was programmed on a Columbus Symphony classical subscription series.  As you may know, this piece is sometimes performed without conductor, but seeing as how Stravinsky himself conducted the Octet numerous times, it seems judicious to follow his example and use a conductor.  Here in Columbus our associate conductor Peter Stafford Wilson conducted our performances.

The octet is scored for 2 trumpets, 2 trombones, 2 bassoons, one flute and one clarinet......where did the odd instrumentation come from?  This is what Stravinsky told his biographer Robert Craft:

The Octuor began with a dream in which I saw myself in a small
room surrounded by a small group of instrumentalists playing some very
attractive music. I did not recognize the music, though I strained to hear it,
and I could not recall any feature of it the next day, but I do remember my
curiosity—in the dream—to know how many the musicians were. I
remember too that after I had counted them to the number eight, I looked
again and saw that they were playing bassoons, trombones, trumpets, a
flute and a clarinet. I awoke from this little concert in a state of great
delight and anticipation and the next morning began to compose the
Octuor, which I had had no thought of the day before, though for some
time I had wanted to write an ensemble piece—not incidental music like
Histoire du Soldat, but an instrumental sonata.

There are plenty of bassoon-related challenges in the Octet.  The opening Lento calls for some tricky trills, such as the high Aflat to Bflat at the beginning: 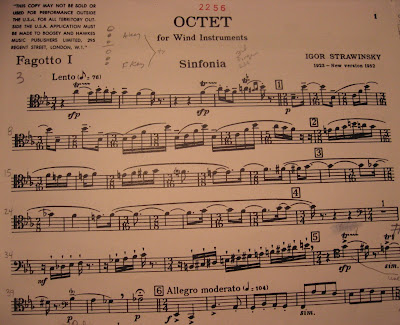 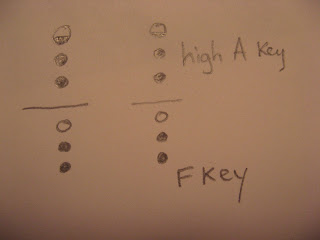 This trill is certainly awkward, though, and is not the most comfortable way to begin a piece.  With both the right and left hands involved in trilling, coordination is tricky.  Don't be surprised if your bassoon shakes, as if the entire instrument must participate in the execution of this dastardly trill.

As you can see in the following excerpt from page 2, the bassoon is often called upon to play staccato in Stravinsky's works. If the notes don't have dots, then the abbreviation "stacc." may appear underneath the staff.  Typically, the "Stravinsky staccato" is ULTRA short, and it certainly seems that Stravinsky capitalized on the bassoon's ability to play staccatissimo. 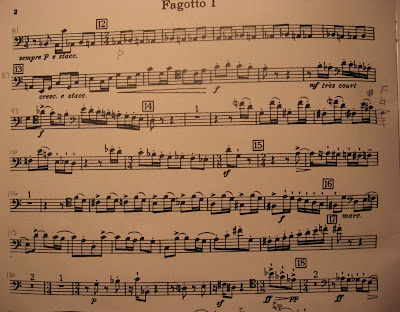 The passage which most musicians, bassoonists or otherwise, associate with the Octet's bassoon parts is the repeating 32nd note scale passages as demonstrated in Variation A below: (especially the downward scales beginning in the 4th measure): 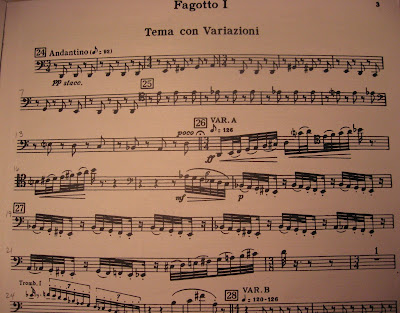 The second bassoon continues the downward scales so that the 32nds sound continuous.  Even though this is what most listeners seem to notice, this is certainly not the most difficult aspect of the 1st bassoon part.

The following 5 measures leading into and beginning Variation C are even more challenging than the above scales:

Fortunately, our maestro conducted the measures before Variation C in quarters.  I spent considerable time practicing (with metronome) dividing the beat into 7 parts and into 5 parts so that I became comfortable with the relationship between the septuplet and the quintuplets. I didn't bother with the notes at first - I either just played on a single note or just used my voice.  (Rhythm is such an important aspect of music that it deserves to be practiced separately from the notes!) 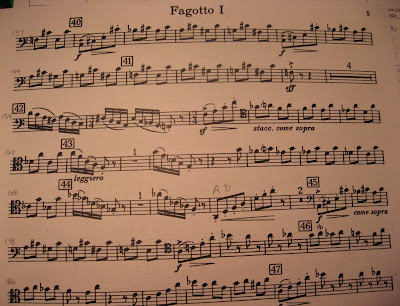 The 16ths at 42 are fast, but playable after slow practice.

The low A, such as the one at 40 below, is suddenly loud and accented, and that happens repeatedly. (This is from Variation D pictured above.)  Due to the sudden dynamic change as well as the pitch tendency of the note, the low A is likely to be sharp in pitch if the player does not make an embouchure adjustment.  (The lower jaw should suddenly drop to lower the pitch.)

The 3rd movement (Finale) begins with a rather martial-sounding 1st bassoon solo accompanied by the 2nd bassoon. Especially for a bassoon solo, it's really long, lasting from the bridge at the end of the 2nd movement to #61, and should be played with lots of character.  Sometimes  bassoonists tend to automatically play at a healthy mf dynamic for any passage marked "solo", but watch out - this solo is marked "sempre p e stacc."!  It should be kept strictly in tempo, and short, light, and quiet. 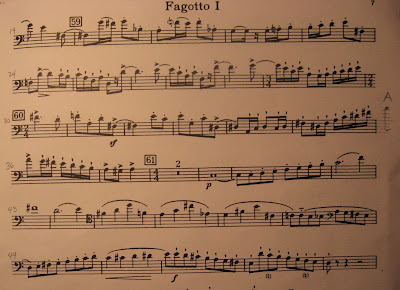 As with so many Stravinsky bassoon parts, there is indeed a passage in the extreme high range.  It can be seen above beginning 8 bars after 61.  Because of that, it is necessary to use a reed which reliably hits high D.

At 66 begins a lengthy passage of continuous notes with no break.  I think it is important for bassoonists to learn to take very, very quick breaths for such situations.  The breaths should be so short that no time is lost and there is no interruption in the part.  If the staccatos are as short as Stravinsky intended them to be, then such quick snatch breaths are indeed possible. 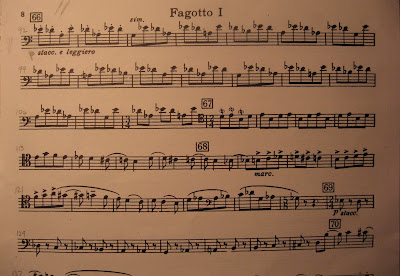 I think it's a great idea for symphony orchestras to offer chamber works such as this one now and then.  The audience benefits from seeing and hearing the wind instruments up close, and the players get to enjoy the opportunity to perform chamber music for larger audiences - a win-win!