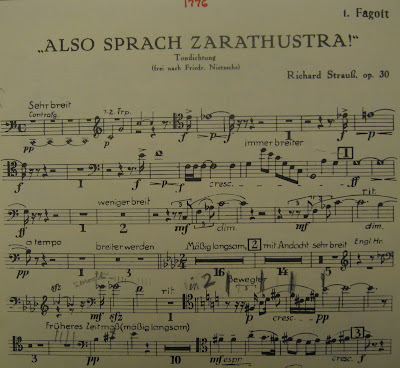 The opening fanfare (entitled "Sunrise") of Richard Strauss' Also Sprach Zarathustra, Opus 30 (composed in 1896) is undoubtedly one of the most famous classical music excerpts in history, especially due to its feature in the 1968 film 2001: A Space Odyssey:

Strauss' tone poem Also Sprach Zarathustra was inspired by Friedrich Nietzsche's literary epic of the same name.  Strauss said that he hoped that his tone poem conveyed “an idea of the development of the human race from its origin…up to Nietzsche’s idea of the Superman.”  The famous opening sunrise fanfare may be thought of as the dawning of life itself, and after exploring such aspects as religion, passion, joy, science, longing, convalescence and death, the piece ends with a musical representation of the World Riddle, which remains unresolved.  (Throughout the piece, C major represents nature, and B major or minor represents mankind.  At the conclusion, the B major woodwind chord co-exists with a C in the basses so that neither B nor C is established as tonic.)

When I first encountered this piece during high school, I was most taken aback by this section:

It looks awfully daunting, doesn't it?  It's totally playable, though.  It's in 4, at a tempo of around 100 per eighth note, up to the 4/4 meter which is also in 4 at the same tempo with one quarter note per beat.

Now that I'm older and wiser, I know where the true challenge lies in this piece - at the ending, beginning with the pickup to 55 and ending at 56:

At first glance, this doesn't look like much (kind of the opposite of the earlier excerpt).  But it's one of the most difficult bassoon passages in the orchestral repertoire.  If the player's embouchure is not in shape, this passage will be unplayable because of the endurance required, especially due to the range which requires a tighter embouchure.  Additionally, breathing management is an issue.  It's necessary to push a high volume of air very slowly through the reed beginning at one after 55.  The reason the air must move slowly is because of the dynamics, which begin at p and diminuendo to ppp.  It's easy to hyper-ventilate in that type of situation.  The remedy is to rapidly expel air first before inhaling, if there is a buildup of excess air (and you won't know until the time comes!).

Normally I don't worry about embouchure.  But for a passage like this, I do.  When the Columbus Symphony recently performed this work with Music Director Jean-Marie Zeitouni, I anxiously awaited the first rehearsal on Tuesday so that I was able to find out what the tempo would be for the bassoon passage near the end of Zarathustra.  (Of course, the slower the tempo, the more difficult the bassoon solo.)  The tempo was on the slow side, and I planned for the tempo to possibly be even slower in the performances (just because it's wise to plan to be flexible).

After Tuesday afternoon's rehearsal, I practiced a lot - much more than I normally would practice late in the day.  I practiced the Strauss passage many, many times, at excruciatingly slow tempos, using the metronome so that I couldn't cheat.  Every once in a while I practiced long tones or other music before returning to the Strauss solo.  The goal was to strengthen the embouchure and to become extremely accustomed to playing that passage.  (Familiarity breeds confidence.)

On Wednesday morning, I did not practice before rehearsal.  Why?  The goal all week was to have as fresh an embouchure as possible each time I played the solo in the orchestra.  So I practiced a lot, but always after rehearsals were finished for that day.  Wednesday after rehearsing with the orchestra I practiced until late into the night, but Thursday morning no practicing was allowed before the rehearsal.  Like any other set of muscles, the embouchure rejuvenates itself during sleep, so no harm is done by over-practicing at night.

On Friday we had a morning rehearsal followed by a concert at night.  I did not allow myself to practice at all until after the Friday night concert so that I wouldn't be "wasting" my embouchure before the concert.  Why was it necessary to practice after the Friday concert?  It's because the rehearsal and concert on Friday might not provide enough of a workout for the embouchure to sustain the high level of strength needed for the Saturday night concert.  Remember, this is not normal embouchure strength we're talking about - it's super strength.

This routine may seem eccentric, but it's what I had to do to be able to sleep at night during Zarathustra week.  I also avoided caffeine before playing this solo, even in rehearsals.  Caffeine can make it difficult to control the embouchure in passages like this one.

The following Zarathustra 1st bassoon passage (sehr langsam tempo) would normally be a big deal, but it's a stroll through the park compared to the above solo!

Strauss had a knack for writing long, full-blown bassoon solos which pushed the boundaries of range, control and endurance.  It's surprising that excerpts from his works do not appear more frequently on bassoon audition lists!

That week's program, which also included Mozart's Overture to the Magic Flute and the world premiere of  Donald Harris' Symphony No. 2, was full of exciting moments.  Here is a video of our Music Director Jean-Marie Zeitouni talking about the program:


"Life without music would be a mistake."