This past weekend the Columbus Symphony presented the Mozart Overture to Le Nozze di Figaro , K. 492, the Brahms Piano Concerto No. 1 and the Bartók Concerto for Orchestra with guests Peter Serkin, pianist and Stefan Sanderling, conductor.  The Columbus Dispatch published a concert review which included a bassoon mention.  The entire concert is streaming on InstantEncore.

Each piece on this program presents numerous bassoon-related challenges. I hardly know where to begin, which is how I felt when faced with the preparation for this program.  But there's no doubt about it, Mozart's Overture to Le Nozze di Figaro is the most commonly asked bassoon audition excerpt!  Why?  It requires perfection, agility, style, double-tonguing, blending, soloistic skill, ability to follow the conductor when playing with strings only, and extreme dynamic control, for starters. 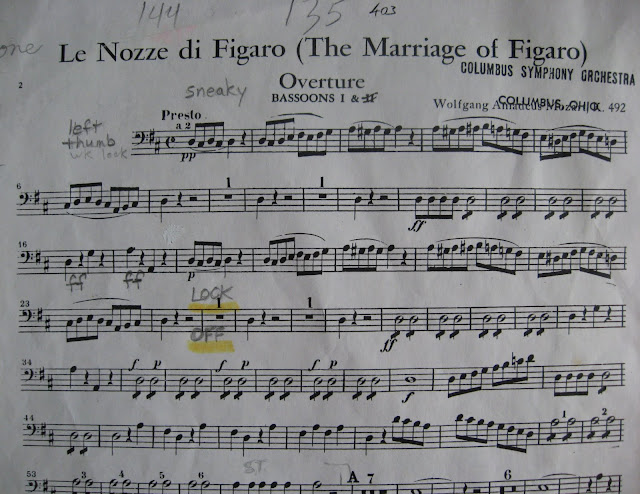 Most bassoonists have practiced this piece endlessly, and the best advice I have for performing it with orchestra is to forget about watching the part- just keep your eyes on the conductor!  It is critical for the bassoons to stay with the conductor's beat.  I can imagine that if I were a conductor, I'd really want to maintain eye contact with the principal bassoonist throughout this piece.

I recall once hearing a bassoonist remark that his bassoon had "a really great Figaro."  I knew exactly what he meant, because the ease (or lack thereof!) of playing this piece does vary greatly from bassoon to bassoon, just as it varies from reed to reed.  It may not be a bad idea to oil the keys before performing this piece, thereby minimizing the possibility of being distracted by key noise.  My bassoon, being new, has very quiet and smoothly operating keys, which I appreciate greatly.

During the week before we rehearsed and performed this program, I thought about how I might prepare my embouchure for the notoriously taxing Brahms Piano Concerto No. 1.  The slow movement presents an endurance challenge for both bassoons, especially the 1st bassoon: 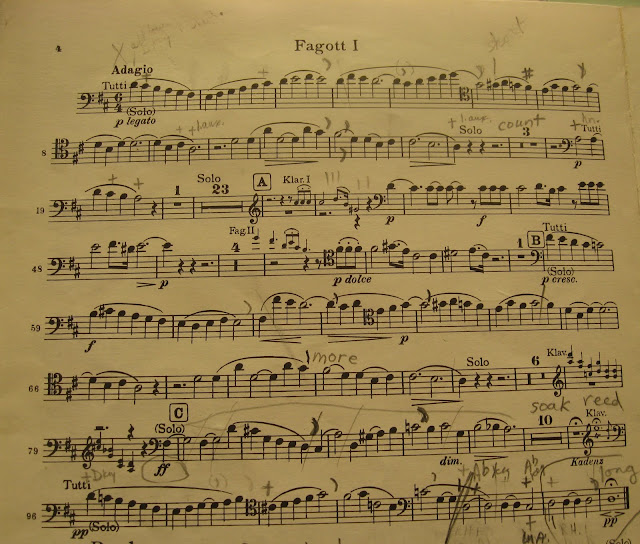 In order to build up my embouchure to be extra strong for this piece, I carried a rejected reed around with me constantly, and I kept it in my mouth with a normal bassoon embouchure probably for several hours each day.  Of course I was also practicing, rehearsing and performing on those days, so the reed-only routine was done in addition to normal playing.  The result was a very, very strong embouchure which never showed signs of tiring, and I intend to use this technique extensively from now on.

While practicing onstage before the concert, I wanted to check the intonation of the lengthy exposed passages in this movement.   I decided to try a trick often used by our principal clarinetist, David Thomas: practicing with earplugs inserted in both ears.  It really worked!  Even with all the chaos going on around me, I was able to hear the pitch of each note with crystal clarity.  Thanks, David!

The Bartók Concerto for Orchestra is chock full of challenges.  The 2 bassoons were asked to play the well-known duo in a rather subdued fashion: 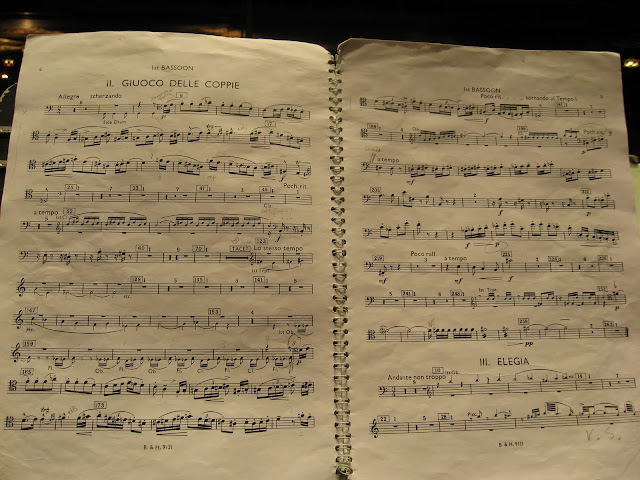 For me, one of the trickiest passages in the piece appears in the bassoon solo at the end of the 4th movement:

The reed I used for this program had one noticeable flaw: it tended to sag on C# 2 in loud dynamics.  That characteristic would have ruined the following passage in bar 369:

All week I rehearsed on the reed I was intending to use for the performances.  But on the day of the first concert, a cold front changed my reeds, ruining my concert reed, so I spent the pre-concert hours making new reeds.  I played the concert on a reed which was 2 hours old.

As a rule, I prefer new reeds due to their flexibility and sparkling sound, but still, I do prefer to have the opportunity to test a concert reed in rehearsal.  (Some bassoonists prefer old reeds in general because they are more stable.)  Fortunately, the reed I used turned out to be a good choice, but I was on pins and needles during the concert.  I thought of the words of the late great bassoon teacher Norman Herzberg, who taught me to make reeds.  He said that a good new reed is one which "holds its trimmings," in other words, the reed is stable, even during its infancy, changing only in response to its maker's adjustments.  He would have approved of the reed I used, I'm sure, since it did hold its trimming throughout the concerts.  Whew!!! 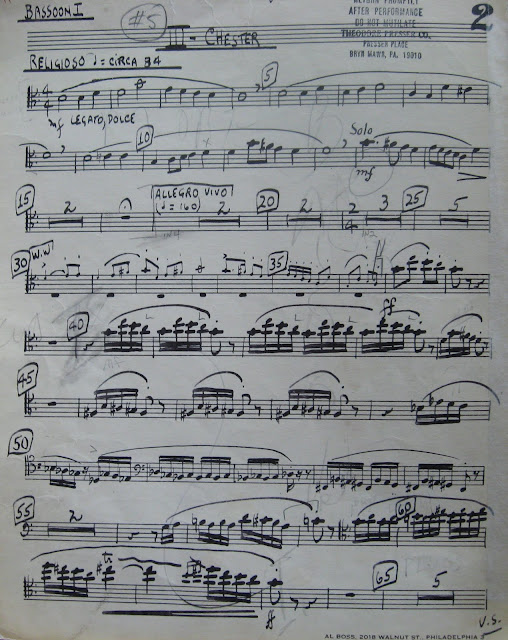 Bassoonists may recognize the above excerpt.  This notorious bassoon part is from William Schuman's New England Tryptich, movement III- Chester.  We're playing it on tomorrow's Young People's Concert (YPC), for which students from the Columbus City Schools are bussed to the downtown Ohio Theatre.

For some reason, musicians often expect to be less challenged for concerts such as Pops and YPCs.  That expectation obviously is unwarranted.  There are few (if any) works in the orchestral repertoire more difficult for bassoon, technically speaking, than New England Tryptich.  While it may seem impossible to perfectly execute this particular bassoon part, there's no doubt that we can take steps to improve our odds of coming out of it relatively unscathed.

All of the 16th notes pictured above are exposed.  The repeated figure at measure 40 is one that I spent a lot of time on.  As a rule, I try to use full standard fingerings, so my left thumb automatically insists upon depressing the whisper key for the G3s in that figure.  Fortunately, the whisper key is not really mandatory here, and my first challenge is trying to talk my thumb out of using that whisper key!  The passage is much more likely to be successfully executed if the left thumb remains up near the high D and C keys.  I use the high D key to play C4 (some bassoonists use the high C key), and of course I use the high C key for B4.  I have found that it is the A3 which causes the biggest problem, with the left thumb having to move to and from the A and C# keys together.  To practice this, I isolate the 4 notes, with added emphasis (length) on the A3 in the attempt to train the left thumb to navigate reliably from the high C key to the high A and C# keys required for A3.: 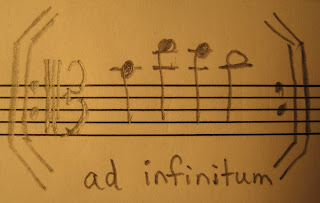 I practice this repeated figure all slurred, at whatever tempo I'm able to play it accurately, and once it seems to be mastered at that tempo, I increase the tempo slightly, and so on until (hopefully) I'm in the vicinity of 160.

In addition to careful preparation, a good dose of luck is most helpful!  I'm hoping to have a good day tomorrow......