Furthermore, it was rather unreliable, even with high reeds.  I had to resort to something I never do - switching bocals.  I am a minimalist when it comes to bocals.  I play on the same bocal all the time (a new Heckel C1), even for screech bassoon solos like the Ravel Piano Concerto.  But I do own a high bocal which was made by William Allgood.

Some bassoons (not mine) have a high F key.  I didn't even know what a high F key would look like or where it would be placed, so I was glad to find this photo of a bassoon tenor joint on Robert Ronnes' website:

The keys near the left hand finger holes are (from left to right) high F#, high E, high F and high Eb.

I think it's accurate to state that keys for high E, Eb, F, F# and G (yes, they all  exist!) may be located in different places above and below the left hand finger holes on the tenor joint.  As many bassoonists know, the location of high E and Eb keys, both of which are common on professional bassoons, varies from bassoon to bassoon.  Bassoonists who order an instrument from a factory or maker must decide where they want the high note keys placed.

Ease of playing in the extreme high range varies greatly from bassoon to bassoon.  I'm willing to bet that on some bassoons, especially older Heckels, it is possible to play the high F without switching to a high bocal (although a high reed is surely necessary).  This may be true of other brands of bassoons as well.

My bassoon is a new 15,000 series Heckel.  It's the ideal instrument for playing principal in the large, acoustically challenged hall where I perform, because it projects really well.  And its high range is exceptional too (although not easy), until we reach high F.  Once I sorted out the reed/bocal situation, even the high F was acceptable.  In fact, I was told by a clarinetist listening to my obsessive practicing that it sounded like a soprano sax.  (He didn't mean that as an insult - he didn't know that we spend our lifetimes trying not to sound like a saxophone!)

But I must admit - I'm not accustomed to working this hard to play the bassoon!  The high F became the focus of the week (and the preceding week as well).  Here is the passage containing the high Fs in the Bernstein:

The person playing this part before me must have had a really hard time, because as you can see, he or she had to write in the names of the notes!  There are 3 high Fs in the passage, and each is preceded by a high Bb and followed by a high E.  Therefore, practicing the 3 note pattern of high Bb, F and E is very helpful.  I practiced that pattern many times.

I also practiced the entire passage with a metronome, once the F fingering was well incorporated.  Of course, at first the metronome was set at a very slow tempo.  I didn't increase the metronome speed until the passage was flawless at the current tempo.  The reason I spent so much time working with the metronome is because in a passage like this, it would be all too easy to become overwhelmed by the difficulty of the fingerings, and to lose track of the tempo and rhythm.  (Besides, I practice with a metronome all the time anyway.)  I also practiced with an electronic tuning drone to be sure the intonation was accurate.

The first time I encountered this piece, I was in shock.  I wasn't at all sure whether or not the 1st bassoonist was really expected to play the high Fs!  Well, I now know that the answer is yes, the 1st bassoonist must find a way to pull it off.  If not, there are plenty of talented unemployed bassoonists waiting in the wings who would be more than happy to do it!  As orchestral jobs become more and more scarce, the standards for performing in those jobs must inevitably rise to a level near perfection.

Italian post-Romantic composer Ottorino Respighi (1879-1936) is undoubtedly best known for his "Roman Trilogy" - Fountains of Rome (Fontane di Roma), Pines of Rome (I pini di Roma) and Roman Festivals (Feste romane) - which are massive, bombastic tone poems, full of color and contrast.  Personally, I prefer his chamber-like works for orchestra such as Ancient Airs and Dances, The Birds, and Botticelli Pictures (Trittico Botticelliano).

Trittico Botticelliano is scored for flute, oboe, clarinet, bassoon, horn, trumpet, triangle, campanelli (glockenspiel), celeste, harp, piano and strings.  Despite his obvious affinity for epic tone poems, Respighi was also quite drawn to the musical approaches of the Baroque and Classical periods and their smaller orchestra sizes.  But economical scoring does not take away any of his allure - his works for chamber orchestra are every bit as colorful and captivating as his huge tone poems.

e was drawn increasingly to the musical approaches of the Baroque and Classical eras, and the attendant smaller orchestras - See more at: http://content.thespco.org/music/compositions/trittico-botticelliano-ottorino-respighi/#sthash.9PSKft8l.dpuf

Trittico Botticelliano demonstrates Respighi's reverence for the past, drawing its inspiration from historic paintings and making use of Gregorian chant and old church modes.   Trittico Botticelliano is a three-movement suite based on three specific paintings by the Florentine Renaissance master painter Sandro Botticelli.  These paintings are exhibited in the Galleria degli Uffizi in Florence, in case anyone is interested in a live viewing.

Bassoonists are generally aware of the famous bassoon solos in the second movement (L'Adorazione dei Magi), and many of us have performed that movement by itself.  A few weeks ago I had my first experience with performing the entire three-movement suite.

The bassoon introduces the first theme of the movement:

Later in the movement, the bassoon has the bass line of an ancient-sounding woodwind trio: 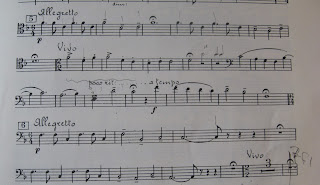 It's important for the bassoon to take the bull by the horns, so to speak, and lay down the rhythms and pitches with confidence.  Any uncertainty from the bassoon player may cause this section to fall apart.

I found the following passage beginning in the 3rd measure of the Allegretto to be quite awkward when I first began practicing it:

The clarinet and bassoon play this together, and it should be played at a rather subdued piano dynamic level - no louder.   I think that the reason I encountered a bit of difficulty at first with the passage is because it is written in a range which is difficult to subdue, for one thing.  And the rhythmic figure is unusual.  If I had made the mistake of focusing entirely on the big solos in the next movement, I would have been sorry when playing this passage!

Of course, this movement features one of the orchestral repertoire's most extensive bassoon solos.  It includes the medieval chant Veni, veni Emanuel, introduced by flute and bassoon as seen in the 5th line below: 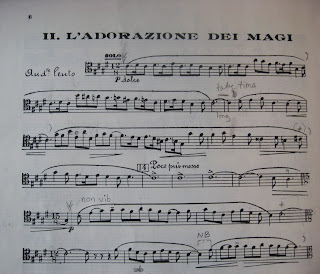 The opening solo is unaccompanied until the oboe enters near the end of the second line.  Whenever a dotted eighth and sixteenth rhythm presents itself in a solo, I ask myself whether the rhythm should be strict and precise or flipped and more casual.  In this case, I chose to give the sixteenth full value (even though I've heard it played flipped).  It's a pretty serious solo - there's nothing light or casual about it.   There is definitely a reverent, religious tone to this movement, and to me that indicates taking a serious or "academic" approach to the rhythm.

It can be challenging to make a solo like this sound relaxed.  It helps to put considerable effort into identifying a good reed, one which produces a desirable sound, with accurate intonation and ease of control.  It's helpful to practice the solo with a metronome and electronic pitch drone (without practicing too much on the good reed!).  I always record myself playing the solo, because only then can I be sure that things are sounding close to the way I want them to.  A steady airstream is important, as if the player is blowing up a balloon while playing the passages.

Later in the same movement, the bassoon plays the following melody, with a different mood and texture: 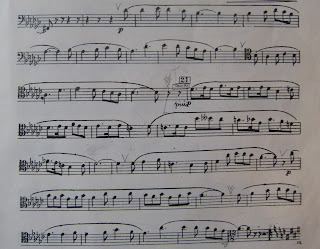 Here, I think it's best to focus on producing the best possible bassoon sound within the context of a simple line, while keeping the pitch down AND not slowing down.  (On most bassoons, the Bflat3 - the one just below middle C - will tend to ride high.)  I focused on those 2  issues: keeping the pitch down and keeping the tempo moving.  Then at 21 (pictured above), things become a bit easier as the bassoon and oboe share the spotlight.

The bassoon has the last word of the movement: 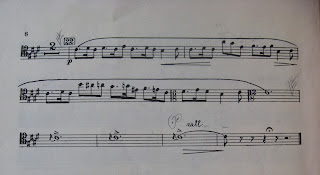 This movement depicts the rise of Venus from the sea, and the orchestra produces the waves which wash her oyster shell ashore.   The following passage (in three) requires some practice time: 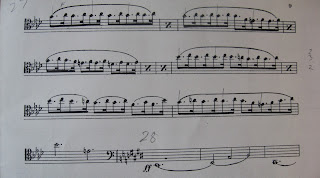 I'm glad to have 3 performances of this piece from last fall under my belt.  It's always easier the second time around (as long as you have a good reed!).