Beethoven, Leshnoff and Tchaikovsky Symphony no. 6

This past weekend the Columbus Symphony performed the Beethoven Overture to Leonore No. 2, the Jonathan Leshnoff Double Concerto for Violin and Viola, and Tchaikovsky Symphony No. 6.  The Columbus Dispatch published this review of the concert. 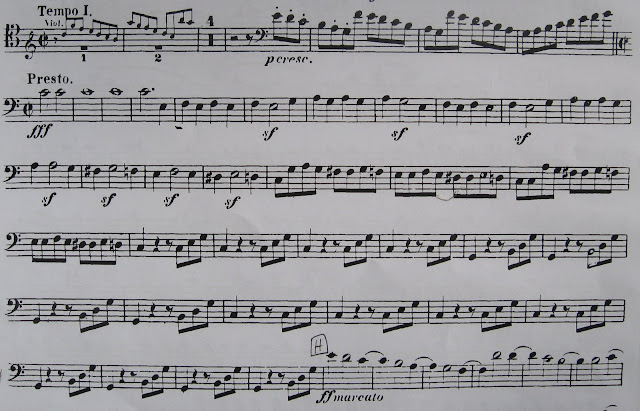 Composer Jonathan Leshnoff was in Columbus for the rehearsals and performances of his Double Concerto for Violin and Viola (2007) featuring our concertmaster, Chas Wetherbee and violist Roberto Diaz.  The two soloists were a perfect match, and the composer was clearly pleased.  Chas is a sought-after soloist who never fails to endear his audience, and Roberto Diaz won everyone over with his incredible Amati viola- what an awesome sound!

The Leshnoff featured some tricky tonguing passages for the first bassoon, such as this one in the second movement:. 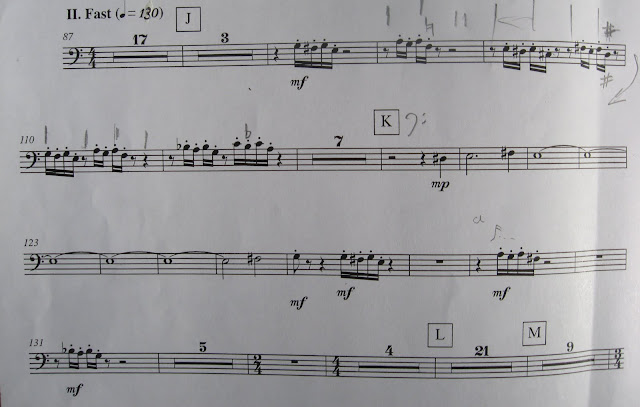 While it may be possible to single tongue at this tempo of 130 to the quarter, double tonguing projects much better.  It's critical to be exactly with the conductor's baton, because there's not enough rhythmic background going on nearby in the orchestra to latch onto aurally.  It's necessary to count like mad while watching the baton.  If the bassoonist listens to the soloists and goes with them, he or she will end up being behind because of the distance.

I began preparing for Tchaikowsky Symphony no. 6 last week, even though last week was also a big bassoon solo week (Firebird).   I started searching for the reed I'd use for the opening of the symphony, and I took the reeds which seemed like viable candidates to the hall to test them there.

In the past, I've always used old reeds for the opening solo.  I expected to do the same this time, but much to my surprise, i ended up using a new reed.  Maybe it had something to do with the fact that I'm playing on a new 15,000 series Heckel- I suppose it's possible that new bassoons favor new reeds.

The winning reed had the quality which was my top priority: reliable response on low E.  This reed was so reliable that it shocked me each time we started the symphony in rehearsals and concerts!

To prepare the solo, I used my electronic keyboard to play a drone on the low E and B with which the string basses begin the movement.  That way, I become totally accustomed to playing that low E in tune.

One of the challenges of this solo for me is dealing with the A#2 in bar 4:

It is difficult to produce a controlled vibrato on that A#- it tends to be too wild or unstable.  I spent considerable time trying to tame the vibrato on that note, using my iPhone's voice memo app to record my progress. I actually noticed considerable improvement in the stability of the A#2's vibrato.  I think that bassoons, especially new ones, can be trained.

During the actual solo, I began the A# with no vibrato, then started the crescendo and increasingly added vibrato leading to the tonic B2.

The bore of the new Heckels is larger than that of the older bassoons.  Because of that, my bassoon requires more air in the low range and I have to breathe accordingly.  As long as the breaths are quick and efficient, I do not think they interfere with the melodic line.

I have never had to play these famous 4 notes in bar 160 of the 1st movement:

In most orchestras, those notes are played by a bass clarinetist who is onstage just to play those 4 notes from the bassoon past.  That way, the principal clarinetist is able to play as soto voce as he or she wishes during the solo preceding these 4 notes, and after the clarinet solo ends, the line can continue down to low D with the same dynamics and tone quality.  It is not reasonable to expect a bassoon to finish that ethereal clarinet solo!

In my opinion, the 4th movement bassoon unisons are really good audition material for any bassoon position: 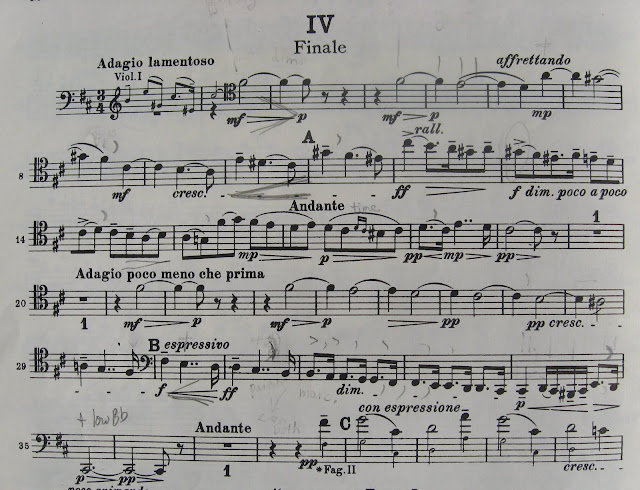 In the past we've used 4 bassoons for Tchaikowsky Symphony no. 6, and the above passages are one of the reasons for that.  This time, we used 2 bassoons.  The F#3s at the beginning of the movement are in unison with the flutes.  I always listen to the flutes and defer to them.  As a rule, I defer to the instrument which is the loudest when it's unison.  The bassoons are never the loudest, so I do a lot of deferring.  (If octaves are involved instead of unisons, that's different, because the lowest octave should usually be stronger than the other octaves.)  Later in that passage the clarinets join in, and the bassoons are mere coloring at that point.  Then the clarinets drop out, leaving the bassoons and flutes to finish in pianissimo.

Beginning in bar 21, though, the bassoons are alone, in unison with each other.  Dynamics are critical to this passage, and of course, dynamics are challenging for bassoonists to exaggerate.  And intonation and ensemble must match!  The reason I consider the above passage to be great for auditions is because it is a great test of intonation, dynamic contrast, matching tone qualities from note to note, and melodic line.

Here is the audio stream of the Columbus Symphony's concert performed last Saturday.

The Firebird ballet is based on Russian folk tales involving a magical glowing bird (the firebird), which is both a blessing and a curse to its captor. The Firebird, premiered 100 years ago in Paris, is historically significant not only as Stravinsky's breakthrough piece with both the public and the critics, but also as the beginning of the collaboration between Stravinsky and Diaghilev (founder of the famous Ballet Russes).  After The Firebird premiered, there were immediate talks of a sequel, leading to the composition of Petrushka and later The Rite of Spring.

For years there has been disagreement among bassoonists regarding a particular note in the famous bassoon solo of the Berceuse, or Lullaby, of the Firebird Suite.  As far as I am concerned, the debate is resolved by this video of Stravinsky conducting the Berceuse.  Although I was taught to play D natural, this time I played D flat in the famous spot:

I think it's safe to assume that the bassoonist in Stravinsky's video is playing the note choice (D flat) which was approved of by the composer himself.  Our conductor this week, Joana Carneiro, did not flinch when I played D flat, and I'm sure that she was listening closely.

Of all of the bassoon solos in the orchestral literature, I have played this one the most frequently.  We've played it on pops concerts, summer concerts, runouts, and school programs as well as classical subscriptions.  One would think that such familiarity would have rendered the solo easy by now, right?  Wrong!!

First of all, it's daunting to be given the responsibility for rendering any solo, never mind one of the most famous gems in the orchestral literature.  This particular solo happens to start on and be centered around what I consider the most unstable note on the bassoon: Bflat 3.  Any tension on the part of the bassoonist will result in a sharp Bflat.  Try too hard to compensate, and the player easily ends up with a flat Bflat!  F3, another important note in the solo, tends to sound weaker than the surrounding notes, which is the opposite of what the solo calls for. 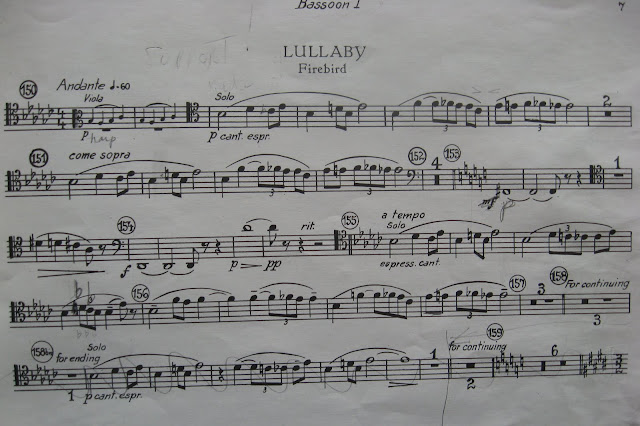 When I prepare this solo, I always think of the words of my teacher K. David Van Hoesen.  He used to speak of moving the fingers as if molding clay for a lyrical solo.  Indeed, finger motion is integral to this smooth, calm, lugubrious lullaby.

To deal with my top priority of playing the solo in tune, I practice against a Bflat drone.  It's important to be sure that the temperature of one's practice space is close to the temperature of the stage.  That's a challenge for me because our stage is often too hot, which of course raises the pitch of the bassoon..  And because of that, I really can't make any final reed decisions at home.  Only onstage can I be sure of a reed's pitch level.

Sound is also critical.  I don't even consider reeds which lack the sound I'm looking for, so the only reeds I test for pitch are the ones which have already passed the sound test.  Yes, I go through a lot of reeds!  I reject reeds which sound harsh, thin, buzzy, bright or raucous.  I prefer reeds which produce a strong and appealing sound throughout the range.

We performed the 1945 version of the Firebird Suite.   This was my first encounter with this version, and it included some interesting bassoon parts, especially in the Pas de Deux:: 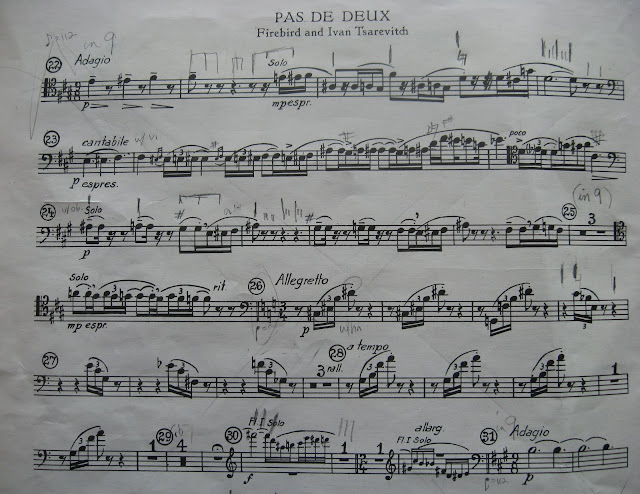 If you'd like to hear the Columbus Symphony's performance from last weekend which included the 1945 Firebird, it can be accessed here on InstantEncore.

The French basson remains a fascination of mine.  A reader of this blog, Brice Mallier who is a French bassoon enthusiast sent me a link to his French basson tribute page

Mr. Mallier also sent this link to Maurice Allard's youtube channel.  Allard is undoubtedly the most famous French bassoonist of all time.

And finally, here's a link featuring the incredible playing of Gilbert Audin in the Poulenc Sonata for Clarinet and Bassoon.

Gilbert Audin is bassoon soloist at the Orchestre du Théâtre National de l’Opéra de Paris , and teaches in the Conservatoire National Supérieur de Musique de Paris.  He is known as an ambassador of the French bassoon and is sought after all over the world for master classes.

Gilbert Audin plays the Buffet Crampon Prestige basson.  He is bassoon consultant/tester for Buffet Crampon and is contributing to the development of the instrument.

I am told that the French basson is actually more difficult to play than the German system bassoon (which is hard to believe because they sound so fluid) and that the French instrument doesn't project as well.  A few years ago I heard French bassoons live at an International Double Reed Society conference.  I don't remember anything about the projection capabilities- I only recall that I was enchanted by the sound, flexibility and lyrical capabilities of "le basson français."
Posted by B.S. at 2:04 PM 11 comments: