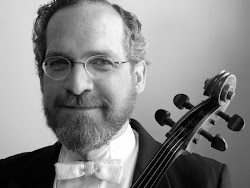 My Columbus Symphony colleague violist Brett Allen recently wrote a blog post about his new composition for violin, viola, cello and bassoon.  Brett and I have already performed it with Quartet Amici here in Columbus.  It was challenging for each instrument, but the piece is a lot of fun to put together and is extremely appealing to the audience.

As unusual as the quartet combination of Bassoon, Violin, Viola and Cello may be, there does exist an ample body of repertoire for it. Out of the Classical period composers Franz Anton Pfeiffer,  Johann Christoph Vogel, Francois Devienne, and Franz Danzi all wrote for the combination. Though not household names like Mozart or Haydn, their output remains significant today for both showcasing the bassoon and tracing the development of bassoon technique. In more recent times, and in like manner, composers Villa-Lobos and Vaughn Williams have works setting solo bassoon against a bed of strings, though not the exact combination under discussion. But, Bernard Garfield, long-time Principal Bassoonist of the Philadelphia Orchestra, now retired, has no less than three Quartets for Bassoon, Violin, Viola and Cello in his catalog, in addition to reams of other bassoon-centric chamber works. When Betsy Sturdevant, Principal Bassoonist with the Columbus Symphony, invited me to play and compose for her Amici Quartet, I saw it as an opportunity to break the bassoon-showcase mold in some respects. I thought, "Bassoon, plus Violin, Viola and Cello. How likely is that? It sounds like a wedding gig where the 2nd Violinist became indisposed and the other quartet members went out and grabbed the first instrumentalist to come along - a bassoonist!" Such suspension of disbelief is possible only in music videos, but I retained the idea of this being some kind of pick-up group.     That, plus I had just seen the movie, The Visitor. I won't give the plot away except to say that a burned out college professor gets hooked on hand drumming and starts showing up at community drum circles. The phenomena of drum circles is of huge interest to me because it is quite the opposite of my classical, tightly structured training in music. What I am saying is - it explodes my whole musical universe! No one brings music. No one comes "prepared." It doesn't matter how "good" you are. No one knows what's going to happen. There's no leader. It's entirely spontaneous. As the drumming rises in intensity, people start dancing and singing. All the while new and interesting drumming patterns are rising to the surface. There's no distinction between audience and performers. No one "performance" can be written down or recreated. No one owns it. No one says, "I invented this, I am a great genius." It seems to reach down deep in the human soul and call forth some primitive, essential need to express. Everyone goes away quite satisfied, the same as if they had just listened to Beethoven's 9th Symphony. I went to work on my "4amici" quartet with all these things in mind. I had a vision, like a stage play. Four buddies (four friends, "quattro amici"), wandering about the city, decide to gather in a public spot for a jam session. In this vision each instrumentalist is an equal participant, it's not just the bassoon on display. Each one throws in a musical idea. One is thinking about half-steps. Another throws in a forceful downward third. Another takes that and turns it on its head. Before long some semblance of music takes shape. Suddenly, there is an interruption, ceremonial music, as if the mayor is passing by. Later, the same material is transformed into something that sounds like a war song from the old country. Then the strings decide to cut the bassoon out and do their own thing. But the bassoonist won't have it and crashes the party. And so it goes, on and on. Each section spins out new ideas and new sections. Where it is headed and where it ends is anyone's guess. Eventually though, as with drum circles, the high energy dissipates and everyone calls it a night.

Sample parts are available on Scribd.com. Sheet Music is available for purchase here.

Thank you, Brett, for this most welcome addition to the bassoonist's chamber music repertoire.


Ravel composed the music for the ballet Daphnis et Chloe as a commission for Sergei Diaghilev.  It was premiered in Paris by Ballet Russe in 1912.  Many musicians consider this to be Ravel's orchestral masterpiece - its huge orchestra, (optional) chorus and lush, passionate melodies have made it a favorite of audiences worldwide.  Ravel extracted music from the hour-long ballet score to create two suites, the second (and more popular) of which includes the rousing "Danse generale".

Daphnis is famous for its woodwind parts, especially the flute solos.  Although the bassoons are not particularly prominent in the piece, our parts are notoriously difficult, if unheard.  In fact, many bassoonists consider the Daphnis bassoon parts to be unplayable.  (No doubt, some orchestral bassoon parts truly are unplayable!)  If asked my opinion, I suppose I'd say that it is unlikely that any bassoonist would be able to execute each passage in Daphnis with 100% perfection at a reasonably fast tempo.  However, near-perfection is possible, and it's worth putting in the time to attempt to nail it reasonably well.

One thing I've noticed recently about practicing difficult technical passages is that it's helpful to keep track of progress.  I've developed a habit of penciling in my achieved metronome marking at the end of each practice session.  I mark it right in the music so that it will be visible each time I practice it.

It's extremely heartening to discover that with each practice session, the achieved tempo increases.  Frankly, I was surprised to see the evidence of progress - before I began keeping track, I often had the impression that I was just spinning my wheels.  Now I'm able to see actual proof of progress.  (If not, then it's time to re-assess one's practice techniques!)

I always start with the tempo at which I can play the passage accurately, which, due to the difficulty of the passage in question, is always very slow.  I do not allow myself to increase the metronome speed until I can play the passage perfectly several times in succession at the current tempo.  During each practice session, I begin at a tempo which is slower than my last highest tempo, to give my fingers and brain the benefit of slower-than-necessary review.

Now to visit the other end of the French Feast spectrum: the Duruflé Requiem bassoon solo.  Don't be fooled by the fact that Duruflé's Requiem is only his 9th opus.  An incurable perfectionist, Duruflé has only 14 published opuses to his name; he was 45 when he wrote his Requiem, Op. 9 in 1947.  It's based upon the Gregorian themes of the Mass for the Dead, and the Lux aeterna movement opens with a statement of chant melody by the bassoon: 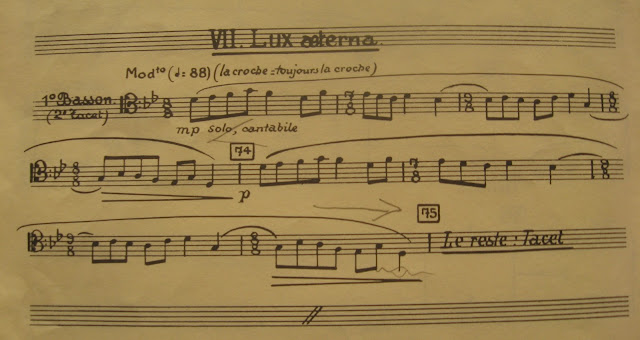 Two of those requirements are easy to practice.  Intonation is practiced by setting a drone to a reference pitch (I usually used Bflat for this solo).  The drone can be played by certain types of electronic tuners, on a computer using an online pitch-producing tuner, or on an electronic keyboard which can sustain pitches.  Then the melody is played against the drone.  It's easy to hear any pitch problems.  Rhythm is easy to practice as well, with a metronome.  Despite the odd meters, I set my metronome to 88 to the quarter.  (Since I often practice with the metronome beating on the offbeats, it does not concern me when the metronome switches from beating on the beat to off the beat in this excerpt.)  But because I don't like to become locked into any particular tempo, I make sure to sometimes practice it at different tempos, even at times like this when the composer has provided a metronome marking.  Live performances are not metronomic, and I like to plan for flexibility.

The other issues (evenness, smoothness, articulation, dynamics, phrasing, tone quality) are best addressed by recording.  Although I own a high quality recorder, it's a big hassle to get it out, re-read the directions and figure out how to operate the #&*@% thing each time I want to record.  Since I always have my phone with me, I use that.   I have recorded thousands of bassoon passages over the past year or so - in fact, I wore out the battery of my last iPhone by recording so much.  Of course we always listen to ourselves while we're practicing, but the recorder offers the perspective of the outside observer, which often exposes hitherto hidden flaws.

If I had to decide which was more challenging - the worst fast passage of Daphnis or the simple melody of the Duruflé, I can say without hesitation that the simple melody is the greater challenge to me.  How about you?