If you're like many bassoonists, you may not give much thought to your swabs.....especially the care and maintenance of those swabs.  Perhaps they deserve notice, since swab malfunction can wreak havoc.

First, the bocal swab......recently the tail broke off of my bocal swab, so I will never again pass that swab through a bocal.  Why?  Well, as some of you know from firsthand experience, swabs can become stuck inside of whatever they're supposed to be cleaning/drying.  Can you imagine trying to extract a stuck swab from a delicate and expensive bocal?  Perish the thought.

I keep the above swab only to use as an example of a swab which should never pass through a bocal.  Some swabs are actually manufactured and sold without a tail, but I do not recommend using a tailless swab.  (A swab with a tail is easily identified by the fact that it has string attached to each end.)  The reason the tail is important is because if the swab gets stuck (and nearly every bassoonist has a stuck swab story) it may be possible to use the tail to remove the swab without damaging the bassoon.  The tail at least offers hope that the swab can be pulled back out from the point of entry (in the opposite of the intended direction).

This is a proper, intact bocal swab:

Bocal swabs are easy to take care of.  I wash mine out after each use. (I run the bocal swab through my bocal once a month.  Unlike the boot and tenor swabs, the bocal swab doesn't have to be used on a daily basis.)  Since it's so small, I just scrub it with nontoxic glycerine soap and water, rinse it thoroughly, and hang it up to dry.  Washing only takes a couple of minutes, and the silk swab dries quickly.

The same swab style - silk pull-through with a tail - is ideal for the boot and tenor joints.  Washing these swabs is not as simple a matter, though, because they take longer to air dry (they're too fragile for the dryer) so you must plan the washing according to your playing schedule.  So I had to wash them today, Christmas Day, because this is my first day off from playing the bassoon in a long time.

I washed both the boot and tenor swabs today and hung them outdoors to dry (because the fresh air makes them smell good).  I just hope they'll be dry before tomorrow's Nutcracker performances.  (They will be - silk dries quickly.  On a breezy day like today, they'll be dry in a couple of hours.)

Some bassoonists don't wash their swabs, but if they did, they'd realize that while the swabs may look fine, the water used for washing tells the real story.  They're not clean.  Not at all!

Another very important part of swab maintenance is cutting off any frayed ends of tails.  Ragged tail ends may cause the swab to easily become entangled, and as many bassoonists have learned the hard way, it's absolutely mandatory to be sure that there are no knots in the swab before it is inserted into the joint or bocal.  Also, it can take a long time to disentangle a swab, and if you're in a hurry you may be tempted to go ahead and use a tangled swab.  (Don't!!)
Merry Christmas, and may the new year bring great reeds and gigs to all! 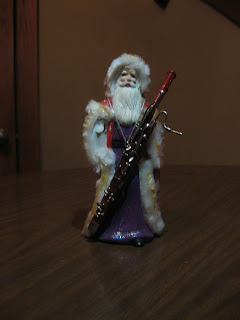 Beethoven Symphony No. 4 and double-tonguing


The famous 16th note solo bassoon passage in the 4th movement of Beethoven's Symphony No. 4 is one of the solos we bassoonists practice most assiduously.  Surely it takes the prize as being the fastest-tongued bassoon solo in the standard orchestral repertoire, since the average tempo of the solo is around 144 per quarter note.

The above video was recorded by my iPhone at very close range, so the sound may be unrealistically loud depending on the settings of the device used for listening.  In the video you might notice that right before the solo begins, I take a fast breath in tempo.  Breathing in tempo seems to add a layer of rhythmic security.

This past week while the Columbus Symphony was rehearsing and performing Beethoven 4, I kept thinking of the advice I've heard uttered by so many successful musicians:  it's necessary to be 150% prepared in order to perform at 100% of your ability.

To begin each practice session I set the metronome at 60 and first play the entire passage all slurred.  I work on slurring at 60 until it's really perfect and reliable.  Then I single tongue it at 60, and then, believe it or not, I double tongue it at 60.

Why double tongue at such a ridiculously slow tempo?   There are a couple of reasons.  One is that it's a worthwhile challenge to play a passage first single-tongued, then double-tongued, with the intention of making the double tonguing sound exactly the same as the single tonguing. The slower the tempo, the easier it is to hear any difference between double- and single-tonguing.  The difference is often caused by the endings of the double-tongued notes.  I have found it  helpful to use the syllables "Tuk-Kut-Tuk-Kut" instead of "Tuh-Kuh-Tuh-Kuh" especially for slow double tonguing. This is a technique I learned from Arthur Weisberg's definitive treatise The Art of Wind Playing.


THE ART OF WIND PLAYING
by Arthur Weisberg

Also, I feel that I have a better mastery of double-tonguing when I know that I can do it successfully at any tempo.  During live musical performances, tempos fluctuate.  I feel prepared only when I have the knowledge (based upon my practicing) that I'm going to be able to tongue at any tempo, even if the tempo changes mid passage.  Single tonguing is limited by the top speed of the player's single tongue.  But double tonguing need not be limited.

However, I'll admit that sometimes double-tonguing on the bassoon can sound rather aggressive, and the Beethoven solo is marked "p dolce" which is the opposite of aggressive.  How does the player tame the double tonguing to the point of soft sweetness?  For one thing, the player can use a slightly slower air stream while still maintaining the high level of air pressure necessary for successful double tonguing.  Also, the double-tonguing sound varies from reed to reed.  I tested many reeds to see which sounded best for this solo.  It's possible to double-tongue on just about any reed; however, the sound varies greatly.  Thin, buzzy reeds tend to produce a very abrasive and undesirable double-tonguing sound, for example.

So I begin at 60 and gradually increase the speed, moving up a few metronome notches at a time.  The next tempo after 60 might be 65, for example.  I don't rush through this process, even though it's tedious.  Accuracy is critical, so if I begin to space out, I take a break until my concentration returns.  I don't allow myself to increase the tempo until I've mastered the passage slurred, single tongued and double tongued.  Also at the slower speeds I practice the solo slurred with varied rhythms.

At all times, of course, close attention must be paid to the grace note in the middle of the solo.  I know that some bassoonists use unusual combinations of double- and single-tonguing designed to accommodate the grace note, and I've experimented with those combinations.  However, what works best for me is straight double-tonguing, since I've found no difference between fitting the very brief grace note into the passage when slurred or when tongued.  Again, it's a fingering issue, not a tonguing issue, even though the "tuh" syllable for the first two notes (the D grace note and the C it slurs to) of the grace note measure must be slightly longer than the other syllables in order to allow time for the grace note.   I often isolate this section of the solo for careful slow practicing:

If I were to write out the syllables for double-tonguing the above excerpt of 11 notes (one of which is the grace note) it would look like this (I've highlighted the grace note D and the C it slurs to):

The Beethoven Symphony No. 4 solo is easier to play in auditions or master classes than in the orchestra.  That's because when the player is alone, he or she chooses not only the tempo, but also the exact starting time of the solo!   In the orchestra, depending upon stage acoustics, the bassoonist may be in danger of starting the solo too late if the violas are located at a distance.  The aural delay of the viola section which plays before the bassoon solo can cause a late entrance of the bassoon solo.  The solution?  Watch the conductor's baton, and choose to follow the visual information from the conductor rather than the aural information from the violas (which is easier said than done).  Light (ie. your visual input from the conductor) travels faster than sound (ie. your aural input from the distant violas), so when in doubt, go with the visual (the conductor) unless you're fortunate enough to play in a great acoustical environment which somehow eliminates the aural delay created by distance.  In some orchestras, the woodwinds sit quite close to the conductor's podium, enabling the bassoons to be surrounded by the string instruments.  In such situations, the problem of aural delay is  non-existent.

Getting back to the concept of being 150% prepared, I think it's accurate to say that Beethoven 4 is one of those solos which turns out to be totally different on stage with the orchestra compared to practicing it at home or school.  Part of the reason for that is the above-mentioned loss of control over the tempo and the starting point when playing in the orchestra.  For most orchestral solos, that wouldn't be a problem, but it can be a little tricky to get the double tonguing started on cue.  The bassoon reed inside the mouth is actually an impediment to double-tonguing - it's not as easy to initiate double-tonguing on the bassoon as it would be on a brass instrument, flute or recorder.  Also I noticed that I had to remind myself in the orchestra to keep the air pressure high for double tonguing......if air support is inadequate, the double tonguing loses clarity of sound and accuracy of intonation.  It's much easier to remember that nugget of truth in the quiet isolation of the practice room than it is onstage during a rehearsal which includes a nerve racking solo!

Having prepared 150%, when concert time arrives, all that's left to do is show up and enjoy the ride. 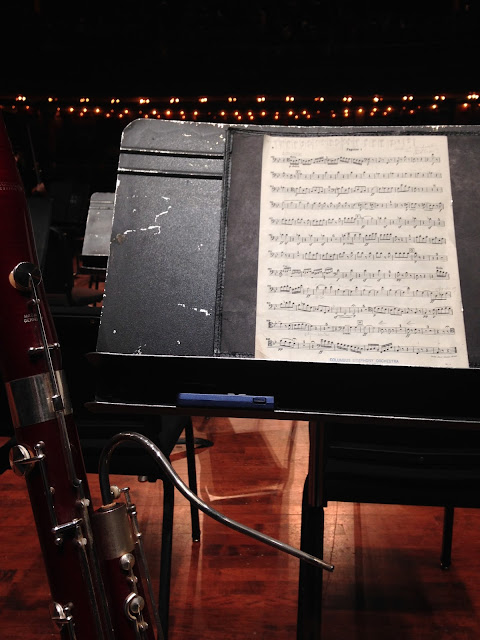