Berg Violin Concerto "To the memory of an angel"

The ultra fascinating Berg Violin Concerto stands out in the orchestral literature as a stunning example of an instrumental requiem.  Berg was resistant at first when the American violinist Louis Krasner approached him in 1935 about writing a violin concerto.  Berg apparently thought that violin writing was just not his thing.  Krasner persisted, finally convincing Berg that this would be his golden opportunity to show that the violin could be effective in twelve-tone music.

At that time Berg, age 50, was composing his opera Lulu.  Suddenly on Easter Sunday of 1935 he received the tragic news of the death from polio of Manon Gropius, the 18-year-old daughter of Alma Mahler (who had re-married twice after her first husband Gustav Mahler died). According to Alma, Berg was so moved that he “could not finish his opera Lulu . He composed the Violin Concerto and dedicated it to the memory of Manon.”

The concerto ended up being a requiem for Berg himself as well.  Lulu was never completed, but he did compose the entire violin concerto in four months, a record for Berg.  He died later that year (1935) from a bee sting. Berg's wife had been alarmed that he was writing the violin concerto with such a sense of urgency, but when she begged him to slow down, he replied that he couldn't because he didn't have much time left.....as if he somehow knew his own days were numbered.

And speaking of numbers,  Berg was known to have used numerology to refer to his beloved mistress Hanna Fuchs-Robettin in his earlier Lyric Suite for strings.  Rumor has it that he did the same in his violin concerto.  Once musicologists figured out the numerology in the Lyric Suite they searched the concerto for examples of the numbers Berg associated with Hannah and indeed found many examples of 10s and 23s (which refer to Hanna).

Berg uses a yodeling Austrian Carinthian folk song in both parts of the concerto.  Musicologists figured out that the original melody had some interesting lyrics:  "A bird on a plum tree has wakened me, Otherwise I would have overslept in Mizzi's bed. If everyone wants a rich and handsome girl, Where ought the devil take the ugly one? The girl is Catholic and I am Protestant. She will surely put away the rosary in bed!" And it turns out that Berg accidentally fathered a child at age 17 with the young daughter (nicknamed "Mitzi") of his family's kitchen servant at their Carinthian summer house.  (Due to social customs of the era, Berg was not permitted to have a relationship with his daughter born to Mitzi.)  Hmmmm..........Berg took it upon himself to fill this concerto with personally meaningful references, apparently.

The concerto is famous for its use of the Bach chorale “Es ist genug” which features the following text:


It is enough: Lord, if it please Thee,
Do Thou unshackle me.
My Jesus comes; I bid the world farewell,
And go in peace to dwell.
In Heaven's house I then will find me,
My cares and troubles all behind me.
It is enough, it is enough.

Relevance of the backstory

Is is important to know this information which is just the tip of the proverbial iceberg of the backround of this concerto?  Does the orchestral bassoonist play any better, or any differently when armed with this knowledge?

In my experience, the answer is yes.  Even if it's all in my head (and so much of playing an instrument is!) I feel more in command when I know the backstory.  And it really seems as though the story I know about the work helps determine the "tone of voice" I seek from the bassoon to use in exposed passages.

There are numerous passages which are exposed and in general, special care must be taken to play with smoothness and accurate intonation.  The most important exposed bassooon part leads into the Bach chorale: 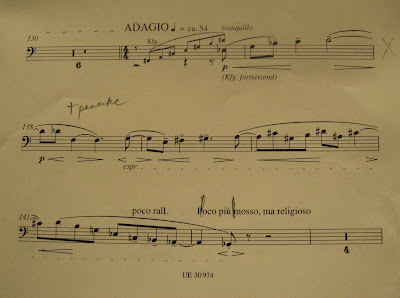 It's a good idea to attempt to match the contrabassoon upon entering, since the 1st bassoon is continuing the contra line.  The D above middle C (in the first full measure of the passage above) is one of the hardest notes to control the pitch of on my 15,000 series Heckel, especially when approached from below as it is here.  I prefer not to add keys to try to stabilize the note, although adding the B flat key is an option.  Some reeds cooperate better than others, but the major factor is embouchure.  If my embouchure is tired, it is far more difficult to get that D up to pitch.  I tried to be careful not to practice much before performing the Berg mainly because of wanting to be able to play that D up to pitch.  Left to its own devices, that note would come out way below pitch, and I mean WAY below.........on my particular bassoon.

Many bassoons are also a bit wild on the open F, especially in this passage where it occurs shortly after that D which had to be coaxed up to pitch.  If your embouchure has not fully recovered from the D, then the F is sure to be sharp.  (The D flat tends to be a more stable note and is less affected by embouchure, although it is indeed affected somewhat.)  Someone who played this part wrote instructions to add the pancake to the F.  That is a common solution to a sharp F, but I don't like it because it changes the sound too much for using in a solo passage.  I just sought to be sure that my embouchure had opened up enough to accommodate the F.

Below is another example from the first bassoon part.  The passage from measure 35 to the end of the excerpt is a unison passage for 2 bassoons and other woodwinds.  As you might imagine, intonation must be carefully attended to. 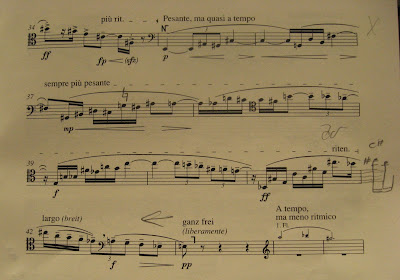 The Columbus Symphony performed this work at the end of our winter season, along with Berlioz Symphonie Fantastique, under the direction of music director Jean-Marie Zeitouni
with violin soloist Vadim Gluzman.  As soon as a recording of our performance is uploaded onto InstantEncore I will add the link to this post.