Learning to double tongue on the bassoon

Until fairly recently, maybe the past 20 years or so, double tonguing on the bassoon was considered a parlor trick, along with circular breathing, and few bassoonists took it seriously.  Now, double tonguing is becoming a requirement for high level bassoon playing.  It's becoming so mainstream that I even introduce it to my high school students (although I don't insist that they learn to do it).

A few weeks ago I wrote a blog post about double tonguing the famous bassoon solo of Beethoven Symphony No. 4 last movement.  A reader who is interested in learning to double tongue on the bassoon asked me for advice on getting started, so here it is.

Double tonguing on the bassoon is not as easy as it is on the flute or brass instruments, because the reed's location inside the mouth is an impediment.  I taught myself to double tongue, and it took 5 years of working on it off and on before I could actually use it in the orchestra.  I kept giving up, thinking it would never sound good enough to be useful, and that's why it took so long.

Now I believe that anyone can learn to double tongue on the bassoon.  That's great news, because fast single tonguing is largely a matter of genetics (some were born with naturally fast single tonguing ability and some weren't).   Although I was one of the lucky ones with a fast single tongue, it bothered me that I struggled to make it through the lengthy fast-tongued passages of the 4th movement of Mozart's Haffner Symphony.

Here's how I learned to double tongue.  First I had to learn how to make my tongue cooperate.  No words in the English language had required me to say "TaKaTaKaTaKa...etc." ad infinitum at a breakneck speed.  Some people use "DiGiDiGiDiGi...etc.".   Does it matter?  No.  Just make sure the first syllable begins with the tip of the tongue forward (in its normal single tonguing position) and the second syllable (the "Ka", "Ga", "Gi", "Ki" or whatever you choose) begins with the back of the tongue toward the back of the mouth.  The distance traveled by the tongue should be as short as possible.  In other words, don't place your tongue any farther back in your mouth than necessary to produce the second syllable.

I've noticed that some people seem to be able to say "TaKaTaKa...etc." fairly easily even if they've never double tongued on an instrument.  I'm baffled by that, since I had to practice saying "TaKaTaKaTaKa....etc." a lot, for weeks.  I practiced it while driving or walking.  Eventually it became easy, thankfully, because if you can't say it, you can't tongue it.

Meanwhile, I was beginning the slow work on the bassoon.  Arthur Weisberg's book The Art of Wind Playing provided the most valuable advice on learning to double tongue.  He recommended practicing slowly, on one note, the following pattern:

Ending each syllable as noted above is critically important, so instead of just "Ta", it's "Tak".   Instead of just "Ka", it's "Kat".  Each note should be extremely short.

When learning to double tongue (and when practicing it after the technique has been learned), it's necessary to listen carefully and hold yourself to a high standard.  The goal is to make each note sound identical to all of the others.  That's not easy at first, but don't give up.........you will eventually succeed.

Gradually increase the speed over a period of months.

Once this pattern is stable and reliable, begin the exercise on "Kat" rather than "Tak" in order to strengthen the weaker "Kat" by placing it on the downbeat.  Another variation suggested by Mr. Weisberg is to use only the "Kat" syllable. 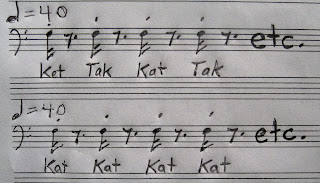 Once your metronome is up to quarter=120 for the above exercises, it's time to begin double-tonguing 16th note scales, sometimes beginning with "Ta" and sometimes beginning with "Ka".  By this point, the note endings are irrelevant, of course, because the ending becomes the beginning of the next note, so "Tak" is now "Ta" and "Kat" is now "Ka".  It's wise to limit your scales to the mid range, since double-tonguing in the extremities is quite difficult.

Unlike single tonguing, it's my experience that once you learn to double-tongue, it's necessary to keep practicing it to keep it sounding good, with constant attention given to the "Ka" syllable.  Once you learn to double tongue you'll always be able to do it, but refinement of the double-tonguing requires practice.  (I still frequently practice by placing the "Ka" on the downbeats in order to keep strengthening the "Ka" syllable, with the goal of making it sound as even as single tonguing.)  It's worth the effort, since the double-tonguing bassoonist will never again have to worry about any tempo being out of reach tonguing-wise.  Haffner Symphony?  Bring it on!