The great Russian composer Igor Stravinsky (1882-1971) wrote his ballet score Petrouchka in 1910 and 1911 and revised it for a more moderately-sized orchestra in 1947.  Petrouchka is one of the great pre-World War I tone poems, so colorful and captivating that it stands alone in the concert hall even without the ballet dancers it was meant to inspire.  Petrouchka is set in St. Petersburg during a Mardi Gras-like festival and tells the dramatic tale of the love triangle among three living puppets: the downtrodden, mournful Petrouchka, the handsome, cocky Boor and the beautiful yet superficial Ballerina.

Many of the greatest bassoon solos in  the orchestral literature can be found in Stravinsky's ballet scores. Stravinsky was not afraid to require the bassoon player to reach beyond his or her limits, as best exemplified by the famously high-pitched bassoon solo which opens another of his famous ballets, The Rite of Spring.

Petrouchka, which the Columbus Symphony performed this past weekend, abounds with interesting parts for the bassoon section, such as the one for 2 bassoons and contra at 58 in Part One:

It would be easy for the first bassoon to be uncertain where to come in if he/she didn't realize that the strings play pizziccato on the downbeats of each measure with grace note entrances after 58.  That's why it's so important to listen to recordings and study scores.

The following passage beginning at 73 presents quite a technical challenge:

Oftentimes, bassoon passages like the one above are lost within the orchestral context.  Not this one!  It's fairly exposed and must be played accurately.  The tempo is usually around 120 per quarter note.

The most effective way to practice is is to slow the metronome way down and, while remaining relaxed, practice it until the fingerings become automatic. (This requires a considerable amount of practicing over a period of days.)  Some musicians refer to this process as the development of "muscle memory."  It is also helpful to practice the patterns with various rhythms and, in the advanced stages, faster than necessary, so that it seems easy when slowed down to the actual tempo.

I use all standard fingerings for the passage, except for using short F# (LH: half hole, 2,3 , E flat key, whisper key; RH: 1) on the downbeat of the second measure.  The parts for Petrouchka are rental; the markings in the above passage are not mine (and I don't know what they mean!).

The bassoon solo after 95 in the Second Part can be awkward: 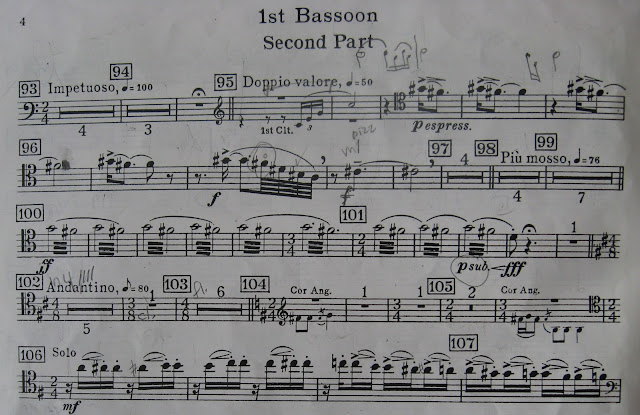 At 106 in the above excerpt, the bassoon seems to represent poor Petrouchka crying over his imprisonment and his rejection by the Ballerina.  The crying is best done in tune, though, and I checked the pitches of those notes with my Boss tuner before each performance.

Perhaps the bassoon solo which most people associate with Petrouchka is found in the Valse:

Here is the Columbus Symphony's performance from this past weekend which included Petrouchka, with Enrique Diemecke guest conducting.

Phew. What a workout!!

Questions: did they take the cover off the piano? Was there recording equipment nearby? It sounds very vlear in the recording. How many E flat clarinets are playing in the 4th mvt?? It sounds like many, LOL.

Yes, you're right about the recording equipment being near the piano. Honestly, I never noticed if the cover was on the piano. It didn't seem unusually loud onstage.

Tell Woody I thought it sounded like a chorus of eefers! :)

I just realized that I have a different version of Petrouchka - when I mentioned the passage at 39, I really meant rehearsal 73. The actual passage that I am finding difficult is the D-F-C-A triplet-sixteenths and eighth note grouping. I am curious about your thoughts on this passage.

Hi anonymous! I'm not ignoring you - I just haven't been able to locate my Petrouchka part. So is there any way you might be able to take a photo of the passage in question and email it to me at betstur@aol.com? Thanks!