WHY we do what we do 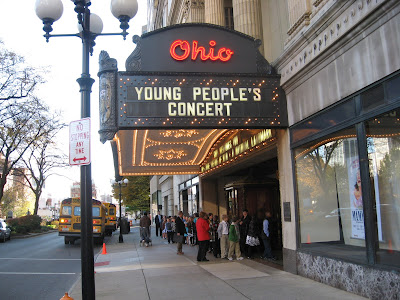 This coming week the Columbus Symphony is performing a series of Young People's Concerts on weekday mornings for public school students.  These students, some of whom have never heard an orchestra before, will play a part in determining our future (or lack thereof).  It is essential for an orchestra to be clear about its reasons for existence, and to be able to communicate that to its supporters, both future and current.

The following TED video explains what I mean by that:


Simon Sinek shows that great leaders and organizations (including orchestras) inspire.  People don't buy (or support) what you do - they buy why you do it.

A few years ago Sinek discovered that there is a pattern in the way that great leaders and organizations think, act and communicate, and it's the complete opposite of the way everyone else does it.  To illustrate his point he uses the "golden circle" which contains the words why, how and what: 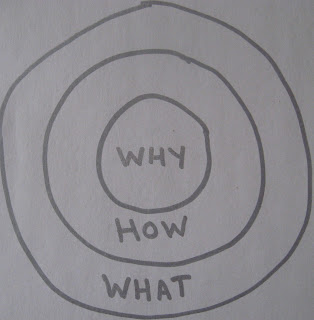 Every organization on earth knows "what" it does, and some know "how" they do it.  But few know "why".

Making profit is not the "why", since making profit is a result.  The "why" is about the following:
Getting back to the golden circle, most leaders or organizations think, act and communicate from the outside in, from the clearest (the "what") to the fuzziest (the "why").

But inspired organizations, regardless of size or industry, all think, act and communicate from the inside out. They begin with the "why".

Sinek uses Apple as an example.  If Apple followed common market strategy, their message would be: "We make great computers.(the "what")  They're beautifully designed, simple to use and user-friendly.(the "how")  Do you want to buy one?"

Instead, Apple markets this way."We believe in challenging the status quo.(the "why")  We believe in thinking differently.(the "why")  The way we challenge the status quo is by making our products beautifully designed, simple to use and user-friendly.(the "how")  We just happen to make great computers.(the "what")  Do you want to buy one?"

Apple reverses the order of the information, beginning with (and emphasizing) its "why".  Apple thinks, acts and communicates from the inside out.

People don't buy what you do - they buy why you do it, because they believe what you believe.


The ABC Symphony's mission is to advance a symphony orchestra of the highest artistic standard for the enrichment and well-being of the area. This mission is achieved through a strong connection to the community, and in-depth understanding of the marketplace and a commitment to providing programming that meets the needs and desires of the community. The ABC Symphony performs a diverse array of classical, pops, family and educational concerts each season, reaching an estimated 500,000 people through live performances and radio broadcasts.

ABC  Symphony clearly understands its "what" and even its "how".  What's completely missing is its "why".  I'm willing to bet that ABC Symphony has difficulty attracting the donations it needs to sustain itself.

Perhaps it would be possible to reset its mission (and its level of success) if ABC Symphony asked itself the following questions:
Ideally, those questions would be asked of the board, management and musicians.  And the answers would determine the orchestra's future, because if the orchestra doesn't know why it exists, it's going to be very difficult for that orchestra to inspire support.


The ABC Symphony believes in the power of classical music to transform lives.  We present classical, pops, educational and family concerts, in various venues and media, so that our music is able to touch each and every life in ABC City and its environs.

I'd donate to that orchestra, because I, too, believe in the power of classical music to transform lives!  How about you?


How to Handel loiterers?

Give ’em a blast of the


According to a recent article in The Columbus Dispatch, some people view classical music as a deterrent to crime.  We've all read reports of classical music being blasted outside of subway entrances and convenience stores, with the apparent result of reduced loitering and the prevalence of peace.

Does this mean that classical music repels, rather than attracts, people?  NOOO!  That notion is absurd, seeing as how the convenience stores certainly do not wish to get rid of paying customers with their classical serenades.

The Dispatch article referred to classical music being played outside of the YMCA in downtown Columbus, where apparently there have been problems with loiterers.  I just happened to be walking past that YMCA yesterday, and I heard a rather rousing rendition of Eine Kleine Natchmusik being broadcast.  If the goal was to stop loitering, it was failing.  There were several men, very possible residents of the Y, standing around talking.  They weren't fighting or arguing or behaving in a menacing manner - they were holding a quiet conversation.  As far as I could tell, the music had a calming and beneficial effect.  If the goal was to restore peace, it was working.

In 2004, the British Transport Police piped classical music into the London Underground to see if the crime rate would be affected.  The result was that robberies decreased 33%, staff assaults decreased 25% and vandalism decreased 37%.  There have been similar reductions in crime elsewhere following the deployment of classical music in crime-ridden areas.

There have been studies conducted at numerous universities examining the use of different types of music to reduce stress.  The British Journal of Health Psychology reports that researcher Sky Chafin at the University of California, San Diego tested the effects of jazz, pop and classical music in reducing blood pressure following incidents which caused high levels of stress.  The participants listening to classical music recovered much more quickly than those listening to jazz, pop, or silence.

Yes indeed, classical music has a measurably soothing effect, even on hardened criminals.

So do classical musicians have reason to become upset upon hearing that their music is being used as a crime deterrent?  Hardly!  I think we should be flattered.  Before we know it, symphony orchestras will be forming partnerships with their local police departments.

Just think of the endless examples of classical music being used to sell products on TV.  In this example, the Verdi Requiem was used to sell Doritos during the 2011 Super Bowl:

Looking for a Summer Festival?


Here's one to check out! The Philadelphia International Music Festival (PIMF) offers a series of classical music programming to students of all ages and skill levels in the United States and around the world, creating the unique opportunity of spending fourteen days immersed in music education and performance with members of the esteemed Philadelphia Orchestra.

There are still openings for students of all ages and skill levels!