Bassoonists are well aware of Mozart's incredible writing for our instrument.  His lovely bassoon concerto, written when he was 18 years old, takes the prize as the best-known work (by far) ever written for bassoon.  The bassoon parts of Mozart's wind serenades, symphonies and operas clearly show his extraordinary usage of the bassoon, and his late piano concertos perhaps offer the best examples of that.

Mozart composed K. 491 for himself to play in the Vienna concert series of 1784-6.  He was quite taken with the quality of the wind players in Vienna around that time and as a result, he assigned dramatic solo roles to the wind instruments rather than mere augmentation of the string parts which had been the tradition until that point in history.  In fact, some music critics have dubbed these concertos to be concertos for winds with piano obbligato!

I love the story about Beethoven, who upon first hearing Mozart's C minor concerto famously said "Ah, we shall never be able to do anything like this".  Beethoven's 3rd piano concerto, also in C minor, is clearly influenced by Mozart's K.491.

It's not uncommon for the winds to be moved to the front of the stage for these concertos so that projection and interaction with the piano are best enabled and the performance can be approached more like chamber music.  When the Columbus Symphony performed the Mozart Concerto No. 24 last week with Music Director Jean-Marie Zeitouni and soloist Stewart Gioodyear, the Ohio Theatre stage didn't allow for such flexibility; in fact, the winds were unusually far back from the front of the stage.

There are many, many exposed passages for bassoons in this concerto, so I will identify only the standouts.  In the slow movement, practically every note is exposed, and the 1st bassoon becomes particularly important in the passage for woodwinds beginning at measure 20: 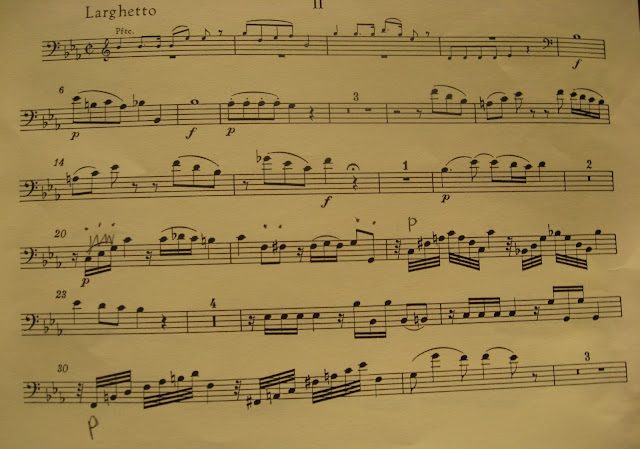 The tempo can vary quite a bit in this movement.  Stewart Goodyear's tempo was on the fast side.  Still, I do not recommend trying to double-tongue the 32nds, even though the flute, which alternates 32nds with the bassoon, is likely to be double-tonguing.  I think it would be nearly impossible to achieve the clarity and tone quality required for Mozart if double-tonguing were to be used here.  (In other words, double tonguing is likely to sound too harsh.)  Also, it's important to match, and not over-balance, the flute on the 32nds.  It can be difficult to judge balance with the flute being in front of the bassoon, so the conductor is likely to assist with that determination.   Also, the conductor may ask for the bassoon to echo the flute on the 32nds.  This is challenging, since the notes in question tend to sound loud, especially when tongued in rapid succession.  It's unlikely that Mozart intended for the bassoon to sound like a machine gun in the midst of this tranquil, lyrical movement.
This is the second page of the Larghetto: 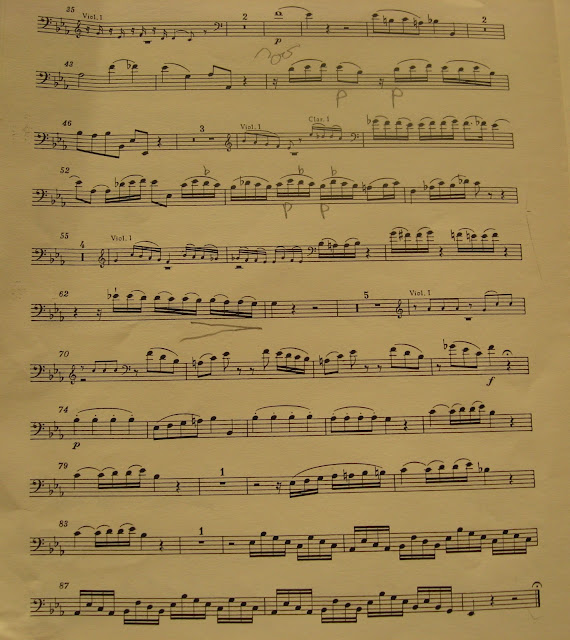 Each note on the page is exposed, which is part of the reason why the concerto is so much like chamber music, with the bassoon rising to higher levels of prominence in certain passages such as the one beginning at 70.  The type of reed I seek for this type of playing has reliable intonation on Bflats, the ability to taper well, and a pleasant, round sound.
The lengthy eighth note passage of the third movement is one of the bassoonistic highlights of the piece: 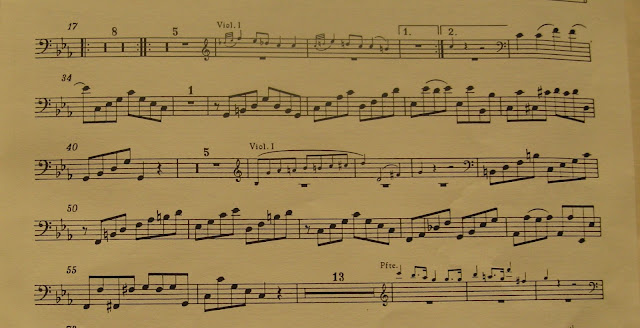 I like to practice it all slurred, which is infinitely more difficult than playing it articulated.  Psychologically it's good to practice with a handicap so that performing the passage as printed seems like a breeze.  (Also, it's great for tongue-finger co-ordination to practice all slurred!)
Today's wind players are indebted to the Vienna wind players of the late 1700's.  If their playing hadn't impressed Mozart as it did, our orchestra repertoire would probably be missing some great gems.
.
Posted by B.S. at 9:55 AM 2 comments:

A week with Nicholas McGegan

The last time  Nicholas McGegan  guest conducted the Columbus Symphony, there were no bassoon parts.  I knew I had really missed out, judging from the buzz amongst the musicians following that experience.

Well, this time around I was lucky.  Each piece on the program called for 2 bassoons:

McGegan, an advocate of early music and longtime Music Director of San Francisco's Philharmonia Baroque, has been called the sunniest conductor in classical music.  Indeed, he was absolutely beaming throughout his week in Columbus.  I'd go so far as to say that he's one of the sunniest human beings I've ever encountered.

The McGegan effect pervaded the orchestra.  Even the most glum among us began to lighten up and crack a smile now and then.  His humor was irresistible, as demonstrated by this McGegan quote about dining with composers from WOSU's Christopher Purdy's  blog post:

Imagine those words spoken with a British accent, and you'll have a pretty good idea of the sort of entertainment the musicians enjoyed this past week.  One memorable story he told was of Haydn's wife - apparently the irreverent woman tore off pages from Haydn's scores to use as hair curlers!

You can hear his accent for yourself in this impromptu interview by Columbus Symphony principal clarinetist David Thomas:

The orchestral parts had been carefully marked in advance by Maestro McGegan, which helped immensely in our efforts to summon the Baroque style using modern instruments.  None of the repertoire had been previously performed by the Columbus Symphony as far as I know, so we lacked the benefit of familiarity.  But McGegan's ultra expressive conducting left no doubt in our minds regarding what effect or nuance he was seeking at any given moment.  Sometimes, for example, he just shrugged his shoulders and waved us off with his hands, and we knew exactly what he wanted.  He even used appropriate facial expressions to help us keep track of confusing repeats and DCs, as if willing us to succeed!

Standards were high, and we were challenged, but we immensely enjoyed our Baroque adventure.  I definitely hope for bassoon parts the next time Nicholas McGegan comes to town.