My friend, colleague and fellow blogger David Thomas recently posted his well-informed thoughts about the changing role of the performing musician.  David lists the irrefutable trends which have contributed to the financial crises for orchestras nationwide:
The third point, competition for entertainment dollars, is huge, and it largely explains the first 2 points (declining and aging audiences).  The internet provides amazing options for listening to and watching world class performances anytime, anywhere.  The most striking example of this is the Berliner Philharmoniker Digital Concert Hall.  There are also countless performances of orchestras and chamber groups offered on YouTube free of charge.

Of course, the internet options are a double-edged sword for us musicians.  An important part of our ongoing development involves listening to music, and now our options are infinite.  These days there's no excuse for musical ignorance - we are able to easily find internet performances of any piece of music we are preparing.   We can access world class performances of any orchestral or chamber work right now, often without spending any money.  That's miraculous!

The infinite internet options (including musical performances as well as video and TV streaming and social media) potentially provide competition for live, in person orchestra performances.  Internet options are an essential aspect of the social trend known as cocooning.  Cocooning, quite simply, is the tendency of people to spend their leisure time at home, using computers, TVs and game consoles for entertainment.

For those who choose to buck the cocooning trend, and instead, venture out into the city of Columbus for an evening of entertainment, there are now many more entertainment options in real life as well (not just on the internet).  During its peak in the 1980s and 1990s, the Columbus Symphony was one of the only acts in town, although competition had begun to materialize, as exemplified by the founding of ProMusica Chamber Orchestra in 1980.  Now, the performing arts options are so numerous (including theater troupes, dance companies, opera, choral, chamber groups including chamber orchestras, jazz ensembles, and folk, world, and renaissance music groups) that local arts groups compete with one another.  In addition to competing for audiences, each arts organization seeks donations from the same local businesses, foundations, and individuals.

In Columbus, I believe that there is another factor or trend which has affected the symphony:
Twenty years ago, downtown Columbus experienced incredible growth.  A stunning shopping mall called Columbus City Center was built right in the heart of downtown.  It was connected to the Ohio Theatre where the Columbus Symphony performs.

Columbus City Center attracted shoppers from all over the Midwest.  Symphony patrons typically enhanced their concert-going experiences with shopping, dinner and drinks at Columbus City Center before and after the performances, for a true night out on the town.

This year Columbus City Center was demolished, following a dramatic decline in which most of its stores went out of business.  (New malls built in the suburbs created competition which could not be overcome.)

Christmas Eve gig and the power of music

Many musicians worked late last night, on Christmas Eve, myself included.  I performed a church gig which featured various combinations of chorus, orchestra and organ in works by Handel, Rutter, Bach, Holst, traditional carols, and Gregorian chants.  Although quite interesting, the program was not particularly bassoon oriented, so I was afforded the opportunity to just listen rather than having to worry about mastering my instrument.

A year ago I played the same Christmas Eve gig, and at the beginning of tonight's program I began having flashbacks to a year ago.  My sister had been very much on my mind last year, and I remembered texting photos of the beautifully decorated church to her last Christmas Eve.

The organ in the church is one which has the ability to shake the earth - that's how powerful it is.  The very talented organist performed Weihnachten, Op. 145., No. 3 by Max Reger (for solo organ) both years.  During the Reger, the lights were turned off, leaving the huge church in total darkness.    This year when the Reger began, I flashbacked again to a year ago.  I hadn't known that it was my sister's last Christmas, because her cancer was in remission.  The piece is spooky and ominous-sounding, and last night something happened as the tremendous crescendo built up.  I was completely overtaken by the music, in an indescribable way which seemed to somehow involve my sister.

When she died this past fall, I didn't talk about it or even mention it to many people.  I left Columbus to attend her funeral, but hardly anyone knew.  A friend suggested that maybe I should write about it on this blog, and discuss what it's like to go on with business as usual at a time like this.  But I couldn't.  In order to keep playing the bassoon and functioning, I had to NOT think about it.  There were times when the music we were rehearsing or performing would make me think of her, but in order to function as a bassoon player I had to push those thoughts away and be very businesslike.

Last night was different, though.  The lights were off, nobody could see me crying, and I wasn't even playing during that portion of the service.  It was the perfect opportunity to allow the music to take effect. My guess is that every person in that church was deeply affected by the organist's performance of  the Reger Weihnachten, but each of us had a different issue or perspective which responded.  The music performed its therapy on whatever ailed each one of us.

When I left the church last night, I could tell that I had been internally re-arranged during the Reger Weihnachten.  And to think, I was paid to be there.

Every once in a while we benefit from a reminder of why we do this - why we push ourselves relentlessly to be the best possible musicians we can be regardless or in spite of compensation or appreciation from outside sources.  One of the most famously inspiring examples of such a reminder is found in the speech delivered by Dr. Karl Paulnack to the incoming freshman class of the New England Conservatory of Music in September 2004: 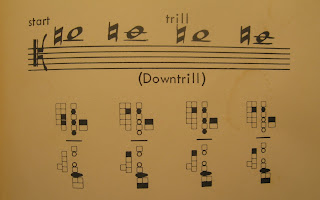 It might seem obvious to some bassoonists that if the cacking begins only after repeated executions of the trill, the logical solution would be to not practice it before a performance.  But I am too obsessive to restrain myself from testing it, over and over, before a performance!

Early this morning I pulled out my Cooper/Toplansky Essentials of Bassoon Technique.  I tried all of the fingerings for that trill, thanking my lucky stars that there were so many choices, and decided upon the one that had popped into my mind last night during the Nutcracker: 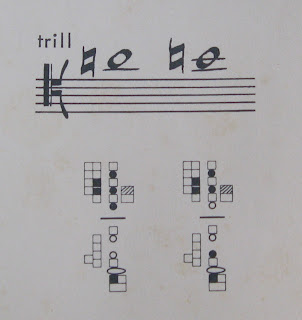 Have you ever encountered a problem with this trill?  What was your solution?

Sigh.  High F.  Sure, I can squeeze it out using a high note reed or an Allgood high bocal, but I want to be able to add F5 to my repertoire of everyday notes.  My goal is to be able to include F5 in scale practice using my everyday Heckel CC1 bocal.  (Is this goal reasonable?)

My current bassoon (Heckel 15421) enables me to play reliably up to high E (E5) on regular reeds (as opposed to "high" reeds), and I am glad that my scale routines can cover the bassoon from Bflat1 through E5 without altering my equipment in any way.  But now I want to expand to F5!

It only works for me some of the time, on certain reeds.  I am using a very tight embouchure which is parallel (no overbite).

Do you have any solutions?!  Please comment here or send me an email at betstur@aol.com.  I will post the solutions in a later blog post.  I'm interested in any information or suggestions offered, even if it involves alteration of equipment!

Until recently, bassoonists typically used to roll their eyes and issue a guttural "aughhhhhh!" whenever Tchaikovsky's The Nutcracker was mentioned.  After all, it contains some of the most confounding bassoon passages ever written, and it is often performed ad infinitum throughout the entire month of December with multiple performances per day!

The musicians were obviously unhappy about the ballet company's use of recorded music, as were many audience members who voiced their disappointment to the ballet management.  The musicians feared that we would never again perform with the ballet, since once such a change is made, it usually turns out to be permanent.

We were lucky, though.  BalletMet's board and management (along with the also financially strapped OperaColumbus board and  management) sincerely wished to work out a solution which enabled continued collaboration with the Columbus Symphony.  Last summer the boards and managements of all 3 organizations (symphony, ballet and opera) worked out a deal.  Because the symphony was also having severe financial problems, it was remarkable that a solution was reached.  The musicians had to vote on a variance to our master agreement to allow reduced pay for ballet and opera services, and the variance passed.

This is the version of the Nutcracker which we're using: 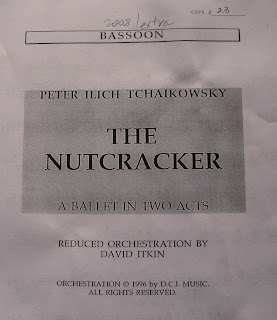 The orchestration was reduced by David Itkin.  Any bassoonist who has encountered the Itkin reduction will report that this part is even more difficult than the original.  There is only one bassoon in this version, so yes, some of the second bassoon parts are included.  Also the bassoon part contains lines originally assigned by Tchaikowsky to a horn or trombone.  The string parts seem to be original, but the woodwind and brass parts are quite altered.

It's a safe bet that this is the most challenging bassoon passage in any version of the Nutcracker: 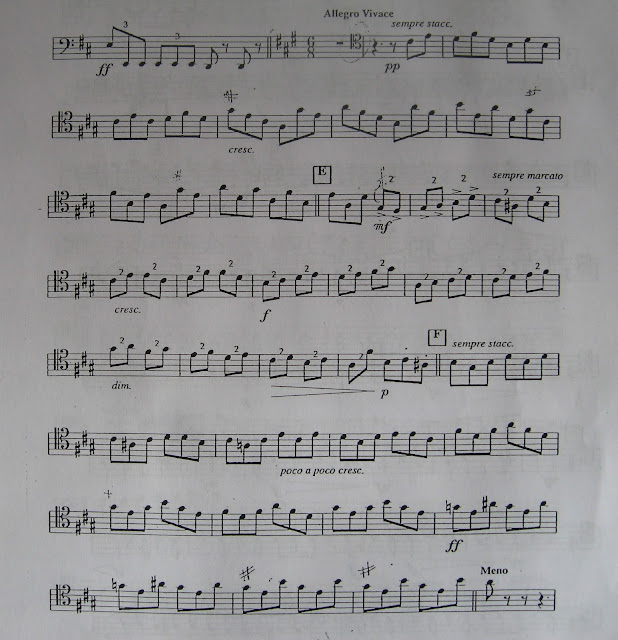 The tempo of this passage can make or break the bassoonist's success, of course, but the tempo is usually uncomfortably fast!  I have practiced it by slowing it down and altering it in every way I can think of:  playing in duple rhythm, playing all slurred, playing with various rhythms and articulations.  Sometimes in performance, the way I watch the part as it goes by seems to make a difference.  If I take care to watch each note in succession, that helps.  (I seem to normally ignore the printed music, especially with something like this which I have practiced a lot!)

The 3rd phrase of the following bassoon solo in Act II used to frustrate me to no end:

The infamous B octaves at the end of the Arabian dance played in the original by 2 bassoons is always tricky to tune:

But in the Itkin version, the lower octave is played by the second clarinet - violà - problem solved!  Itkin is either a genius or a lucky experimenter.

As an example of the unexpected surprises transferred from other instruments to the bassoon in this version, the following appears in the Dance of the Flowers: 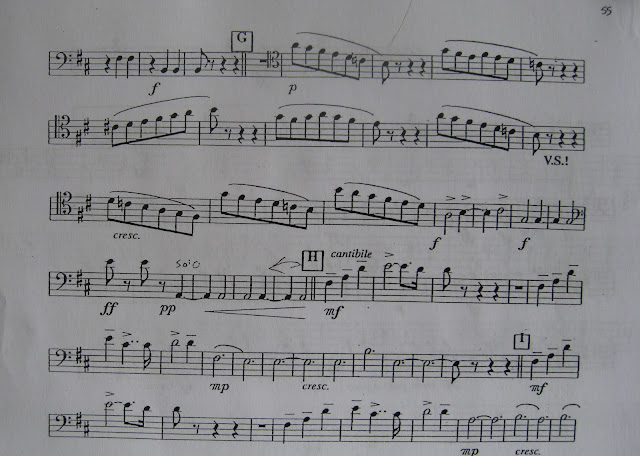 The scalar passages at the top of the page are unfamiliar, but playable, as are the horn choir parts beginning at H.  Chances are, the music sounds perfectly fine (and normal) to the audience.

Classical musicians are beginning to open our minds to change. Perhaps we would have balked at the idea of performing the Itkin Nutcracker reduction 10 or 15 years ago.  We're beginning to ponder the notion that flexibility may be required of us if we want to remain employed as musicians.  And I think it's safe to say that all of us are more appreciative of the work we're offered, since we can no longer take it for granted.