Last week the Columbus Symphony performed one of my all-time favorite works, Mahler Symphony No. 6, with our Music Director Jean-Marie Zeitouni.

I would prefer to continue wallowing in the aftermath of Mahler 6, allowing memories of its melodies to meander through my mind, but reality dictates that I must prepare for this week's performances of Tchaikowsky Symphony No. 5.  I find myself making comparisons between the 2 symphonies, each of which is considered to be the most personal work of its respective composer.

But it's time for me to move on from Mahler and embrace Tchaikowsky.  After all, bassoonists are eternally grateful to any composer who favored the bassoon, right?  And Tchaikowsky is right up there near the top of the rather short list of such composers.  His 4th, 5th and 6th (and sometimes 2nd) symphonies appear on nearly every orchestral bassoon audition list.


“I should not wish symphonic works to come from my pen which
express nothing, and which consist of empty playing with chords,
rhythms and modulations… ought not a symphony – that is, the most
lyrical of all musical forms – express everything for which there are no
words, but which the soul wishes to express, and which requires to be
expressed?” - P. Tchaikowsky

Tchaikowsky's inner turmoil is no doubt expressed in his 5th symphony, although it ends in bombastically optimistic triumph.  Tchaikowsky denied that this symphony was programmatic, but his initial sketches, jotted down during his lengthy period of self-doubt which preceded the writing of this symphony, hint at his original intent:


Introduction.Complete resignation before Fate, or, which is the same,before the inscrutable predestination of Providence.Allegro.(I) Murmurs, doubts, plaints, reproaches against XXX(II) Shall I throw myself into the embraces of Faith???

It's generally accepted that his idée fixe, first presented by the unison clarinets in the introduction, represents fate in this symphony.  Beyond that, we can use our imaginations to figure out what Tchaikowsky's soul wished to express "for which there are no words".

There are many exposed bassoon passages throughout the symphony; I will focus on the main solos.  The 1sr clarinet and 1st bassoon play a soli in octaves at the beginning of the Allegro con anima of the 1st movement:

The top priority, I think, should be to successfully blend with the clarinet.  Using a reed which has the ability to taper note endings is ideal, to provide the degree of refinement necessary for this solo and the bassoon solo of the recap:

The articulations and a couple of the notes are different in this solo, although the hairpins are similar.  The bassoon playing alone in the recap is perhaps meant to sound lonely, wistful, melancholy, haunted.  For this solo and the earlier soli with clarinet, I try to play with a smooth, even and subdued sound.

In the Moderato con anima of the very famous second movement, the clarinet plays a solo followed by the bassoon.  To me, the clarinet solo always sounds soaring, and even though it's much more difficult to soar on the bassoon, that's my goal - to soar like the clarinet.

It's necessary to really put out for this solo just to match the clarinet.  I think it helps to have a well-focused sound.  In the second beat of measure 72, I practice it slowly in 3 groups of 3, tonguing the first of each group of 3 for clarity.  When actually playing it in the orchestra, it's likely that the bassoonist won't have the time or wherewithal to actually count the 9 notes.  I have found it helpful to practice it beforehand to the point where I can be sure that 9 notes are going to come out, even if I don't count.  This solo and the one at letter E can be played with rubato, such as stretching the notes with tenuto markings.  I practice with a metronome (at around 72 to the quarter) to be sure that any rubato is going to fit into a strict tempo.  Projection-wise, the solo at E is even more challenging to project than the solo before D.  Some bassoonist other than myself marked a breath at the end of the measure 2 after E, but I am not planning to breathe there - not unless the tempo is unusually slow..

And of course, the most famous bassoon solo of the symphony (and the one most likely to be asked at auditions is this one, in the third movement waltz: 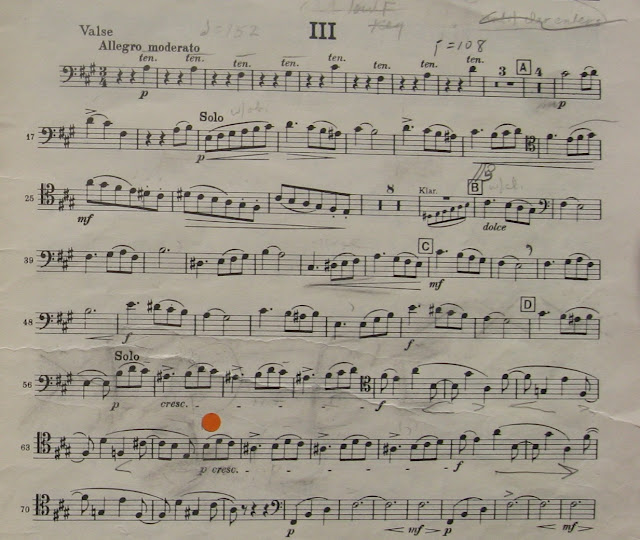 The actual bassoon solo begins halfway through measure 56, but it's possible for an audition excerpt to begin at 4 after A and continue to measure 72.  Measure 19 is the beginning of the bassoon and oboe soli, which is an elegant dance.  At B, the bassoon joins the clarinets (be sure not to use any vibrato!) in yet another blending opportunity, leading up to the famous bassoon solo.

The first phrase (first 4 notes) of the solo is traditionally played slowly, out of tempo, in a dramatic declaration.  The second phrase is played subito p, either back in tempo or as part of a gradual return to tempo.  The downward slurred syncopated notes beginning in 78 may be awkward to play, but the goal is to not let that be known.  It should sound strong and easy.  I always practice this passage with the metronome set at many different tempos.  Even though I prefer to think of it in one, I set the metronome to 3 beats per measure at tempos ranging from 100 to 180.  As I've mentioned in previous posts, I like to practice with the metronome on the offbeats rather than the downbeats.  That method is particularly useful for this solo.  (Incidentally, the reason I have an orange sticker in measure 64 is so that my eyes will know where to go on the page after watching the conductor for the solo up to that point.)

Even though I have recorded this piece with the Columbus Symphony, I am sticking to my rule of preparing as if for the first time.

Tomorrow we begin rehearsing Tchaikowsky Symphony No. 5 with guest conductor Gunther Herbig.  If you're in Columbus, come and hear the concert Friday or Saturday night at 8 in the Ohio Theatre!  And if you're not, you can hear the live broadcast at WOSU FM Classical 101 streaming audio.

Last week the Columbus Symphony performed the Brahms Violin Concerto with soloist Gil Shaham and our music director Jean-Marie Zeitouni. It was an amazing concert, as confirmed by the enthusiastic audience packed into the Southern Theatre in downtown Columbus.

It's important for bassoonists to focus on world-class musicianship as demonstrated by artists such as Gil Shaham, lest we allow the technical hurdles of our instrument to divert us from our primary goal.  Here's a stunning example of his playing:

What an honor it was to be onstage with such a musician!  In order to prepare, I sought a very smooth reed which played  pianissimo reliably.  Reeds like that also enable delicate attacks and tapers at the ends of notes.  These are the reeds I always prefer, actually, since they offer the player the most control.

The 1st movement requires a great deal of smooth, discreet and in tune playing from the 1st bassoon, as evidenced by the passages below:

For the dotted half F#s and C#s, it's a good idea to figure out the best fingerings for your chosen reed in advance.  I used my standard F#3 (LH: 2 + Eflat key; RH: 1+2+4) followed by the short C# (LH: 1+2+3+C# key+low D key) followed by alternate F# (with the right hand little finger F# key).  Intonation is the top priority, and smoothness is also important.  The eighths following the dotted halves are traditionally played with a tasteful bit of rubato, in the style of the piece.

The bassoon enters with a smooth line in D major at the end of the violin cadenza:

In my experience, the tranquillo can be achieved only with a reed which allows it.  That's why I spend so much time seeking the right reed for a piece like this which requires such subtlety from the bassoon.  Also, this is one of those passages in which it's easy for the bassoon lag behind, because only the strings and the violin soloists are playing with the bassoon.  If the bassoonist relies on his/her ear, lagging behind is the probable result because of the physical distance between the strings and the bassoon.  At times like this, it's critical to watch the conductor.  (Light travels faster than sound!)

The slow movement's glorious wind writing features the 1st oboe as soloist.  The 2nd bassoon part commonly appears on 2nd bassoon audition lists as a test of intonation, control, and familiarity with repertoire.  The opening major third chord is played by 2 bassoons only and is traditionally played with a straight tone (no vibrato), especially since 2 horns later join the chord.  (As a general rule, all chords are best played without vibrato!)  The dynamics and hairpins can be exaggerated for maximum impact, but without ever overpowering the 1st oboe. 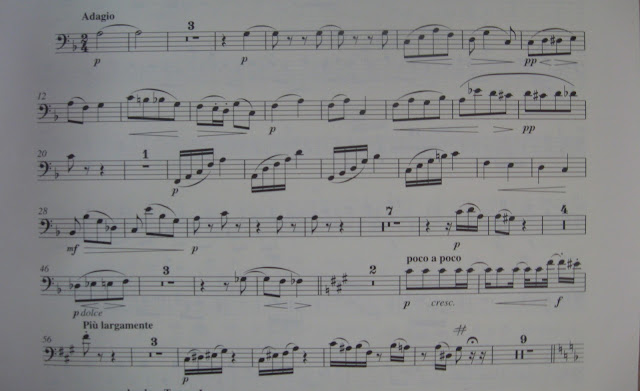 The 1st bassoon arpeggios beginning in measure 22 are open to interpretation.  Some conductors like them to be quite pianissimo; others like them brought out more. It's best to choose a middle-of-the road approach (not too hushed, yet not too outgoing) until the conductor weighs in.
In the last 2 measures of the Piu largemente above features a dialogue between the violin soloist and the 1st bassoon.  Again, that subtle and flexible reed which allows tapered note endings is a plus.
At the Poco piu presto in the 3rd movement shown below, the 1st bassoon and 1st clarinet enter with grace notes before the second beat after a very brief violin cadenza:

It's helpful to know that the orchestra is silent in the 1st beat of the Poco piu presto.  That's why I always listen to recordings of the pieces I'm about to perform, even if I think I know the piece.  It would be all too easy to forget about a detail like that, and it's not good to be caught off guard!
.
Posted by B.S. at 10:20 AM No comments: