Mozart Piano Concerto no. 23 and Bruckner 4

This past weekend the Columbus Symphony performed Beethoven Prometheus Overture, Mozart Piano Concerto No. 23 in A major and Bruckner Symphony No. 4 under the baton of Christopher Seaman
with piano soloist Yeol Eum Son.  The Columbus Dispatch published a rave review  and the concert is streaming online here:     Mozart and Bruckner - InstantEncore.

Mozart's 27 Piano Concertos are definitely among his greatest achievements.  Mozart's later piano concertos feature wind writing so extensive and brilliant that some critics have dubbed them concertos for winds with piano obligato!  I think it's safe to say that bassoonists always welcome the opportunity to perform the Mozart Piano Concertos, with No. 23 in A Major being among our favorites.  I am ever amazed at Mozart's ability to use the bassoon to its greatest lyrical potential, even more so when I think of the primitive bassoon of Mozart's time.

In movement one of the concerto, the 1st bassoon plays the melody with the 1st violins.  As always in such a situation, I always try to take the lead rather than wait to hear the violins, to avoid lagging behind.

I use vibrato on passages like this, since the violinists do.  The idea is to always match the instruments you're playing with.  At times during this concerto, the bassoon plays with clarinets and horns, which means vibrato would be out of place.

The bassoon begins a long lyrical passage in measure 13 in the slow movement after the clarinet.  I start the B3 with no vibrato to match the clarinet, and then gradually add vibrato so that the rather mournful phrase can be heard over the orchestra: 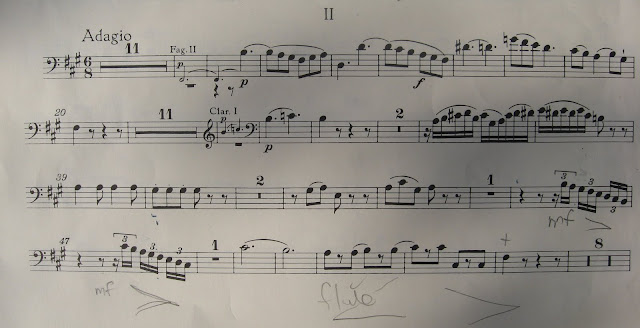 In bars 46 and 47, the 1st bassoon and 1st flute play two descending 16th note triplet scales in octaves.  The note lengths are usually on the shorter side, with a decrescendo which still allows the lower notes to be heard.  To me, these two passages sound like laughing.  (It's not hard to imagine a character like Mozart inserting a couple of laughs into this somber movement!)

In bars 80 through 83 of the slow movement, the 1st bassoon imitates the piano in 16th note arpeggios.  The pianist plays the 16ths first; all the bassoonist has to do is match the articulation (and pitch, of course): 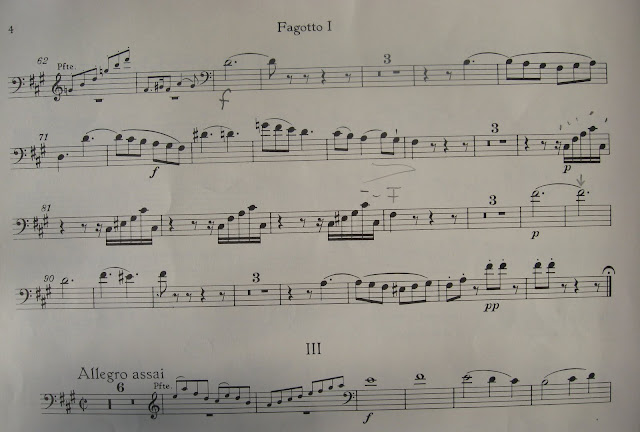 I played this concerto for the first time during my college years.  At the time, the tongued eighth notes (in cut time) in the 3rd movement bassoon parts seemed like a really big deal.  That was before I learned to double tongue.  Now it's not that big a deal, although listeners are often impressed.  These days I have a choice- I can play it either single or double tongued, but I usually prefer double tonguing so that I'm able to move ahead if necessary.  To me, single tonguing sometimes sounds as though it's bogging down the tempo.  When double tonguing, though, I keep my eye on the conductor to avoid the occasional temptation to take off like a bat out of you-know-where!  The most facile playing on earth is of no value unless it's in time with the rest of the ensemble. 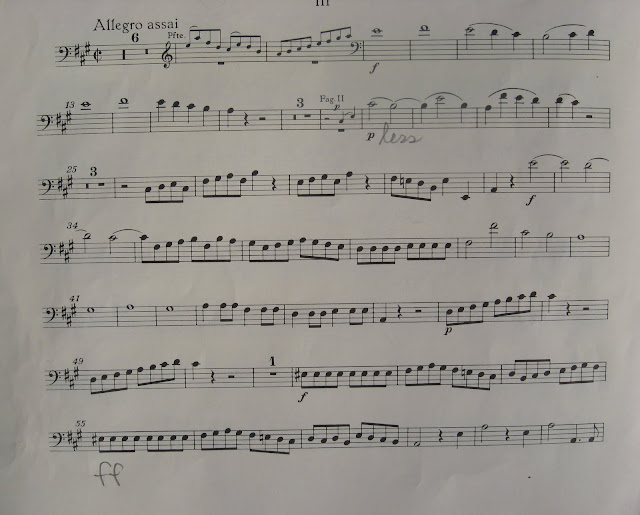 Unlike Mozart, Bruckner had little use for the bassoon.  I'd say that Bruckner's 4th Symphony has more exposed bassoon than any of his other symphonies, though.  The following solo in the 1st movement must be played with very clear triplet rhythms, moving ahead to prevent dragging:

At one point during one of the rehearsals when Maestro Seaman was insisting on rhythmic accuracy from the orchestra, he quipped, "Bruckner is dead, but I'm his representative!"

Rhythmic accuracy is again called for, along with smoothness, in the exposed passages after 500 later in the movement: 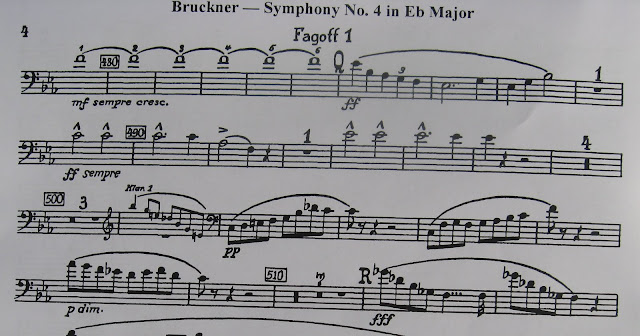 The 1st bassoon has the bass lines in the following exposed wind chords of the slow movement:

I tried to listen carefully to hear where each pitch should lie in each chord, according to where my colleagues placed their pitches.

The main bassoon solo of the symphony occurs in the 4th movement.  It's a series of three-note phrases within a lengthy crescendo:

In this passage, the bassoon almost takes on the importance of a brass instrument.  At a time like this, I'm glad that I have a bassoon which can really project when called upon.


Shortly thereafter appears the last bassoon solo of the symphony:

It's only one measure long, but nonetheless I spent a lot of time practicing for smoothness, especially on the slur down to C2.  Just because a solo is short and simple doesn't mean it's easy!
Posted by B.S. at 7:38 PM 2 comments:

We Are the Music-Makers

A colleague from the Columbus Symphony emailed me this poem.  At a time when orchestras throughout the country are experiencing great financial difficulties, we musicians may benefit from this reminder from poet Arthur William Edgar O'Shaunghnessy :

Last weekend the Columbus Symphony performed Mozart Symphony No. 32, the Barber Violin Concerto with soloist James Ehnes, and Mahler Symphony No. 1 with Alondra de la Parra conducting.  The audio stream of the concert can be accessed here.

The Barber Violin Concerto 3rd movement features one of the most challenging 1st bassoon parts in the orchestral literature. The movement is in cut time, with a tempo of 96 to the half note.  The passage which causes the most finger-tangling is the one beginning a measure before 9: 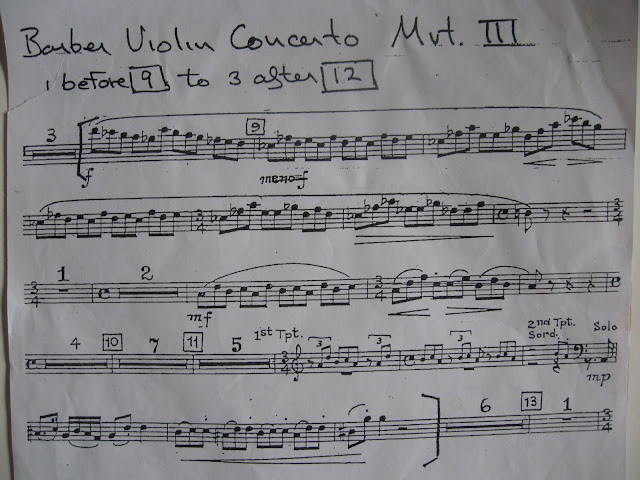 There's no way around it- a passage like this just has to be practiced ad infinitum.  I also found it helpful to isolate these problematic notes and practice them this way, concentrating on smoothness:

Slow practice is the only way I know of to set up the greatest possibility of successful execution of such challenging bassoon licks.

The 1st bassoon and 1st flute play the melody in octaves between 11 and 13 above.  For some reason, even though this passage is relatively easy compared to the rest of the movement, the tendency is to lag behind.  It's best to listen to the snare drum to ensure an accurate tempo.

Of course, Mahler 1 is famous among bassoonists for the 3rd movement funeral march which begins with a string bass solo followed by a bassoon solo: 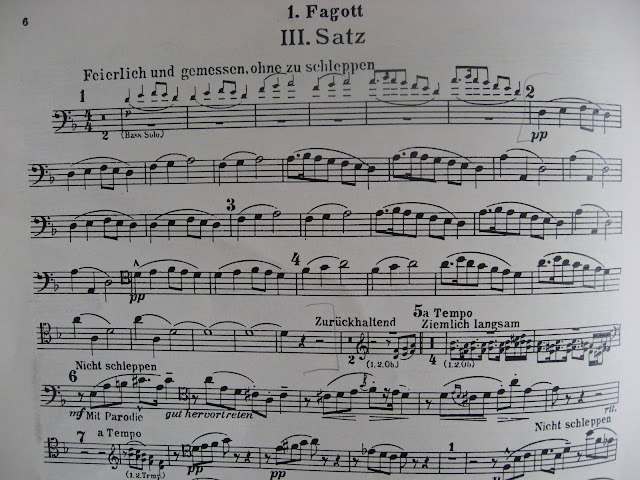 The simplest melodies can be the most challenging due to the required perfection.  To practice the above solo, I played the solo repeatedly with a drone sounding on the tonic (D) so that any intonation issues would be obvious.  I used an electronic piano with the sound set on jazz organ.  I used duct tape to tape the D key down- the sound was continuous until I removed the tape.  This may sound silly, but I have a policy of doing whatever it takes to achieve the results I desire.  When practicing the solo this way, I also aimed for smoothness in addition to correct intonation.  By the time the first rehearsal with the orchestra occurred, I was comfortable with this solo.

Later in the movement, the bassoon perhaps represents a mourner at the funeral in a long line ascending, in unison with the 3rd horn, up to high B flat.  There, the horn drops out and the bassoonist is free to employ vibrato with which to sob through the rest of the solo.

Beginning 4 after 18 as seen below, the bassoon joins the flute in unison for a bit of sorrowful reminiscing.
Then the bassoon gets to show off its nasty side at 19:

The first 2 measures at 19 may benefit from a harsh, even aggressive character, but I think that the third measure sounds best when played in a contrastingly whimsical fashion.

The 4th movement of the Mahler features one of those passages which is surprisingly exposed and precarious, especially if the bassoonist is caught off guard.  (It's hardly noticeable on recordings.)

It really does have to be very quiet and, preferably, very smooth and even.  Lots of breath support is required, especially for negotiating the half step from F to G flat in the 4th measure after 40.  Then, the passage beginning 6 after 40 is suddenly incisive and quasi aggressive.  There's a big difference between ppp and p when Mahler is the composer!
Posted by B.S. at 5:54 AM 4 comments: