Rumor has it then when the Boston Symphony's retired principal bassoonist Sherman Walt died in 1989, the orchestra performed the Berceuse (Lullaby) of Stravinsky's Firebird in his memory.  It's hard to imagine a more fitting tribute from the BSO to its longtime principal bassoonist.

Stravinsky certainly did us bassoonists a favor when he featured our instrument this way in the oft-performed Firebird suite   But when performing the Firebird, we bassoonists must meet incredible technical demands en route to the Berceuse.  The Berceuse occurs just before the Finale, and is preceded by an aptly-named Infernal Dance.  There is one passage in particular of the Infernal Dance which is darn near unplayable up to tempo:

I have no words of advice for this passage.  It's fast, and the fingerings are treacherous.  If you have any helpful hints, let me know.  My approach was to be sure that I could play the passage accurately at a slower-than-realistic tempo.  That assuaged the guilt somewhat, and enabled me to fake it while actually hitting a few of the right notes along the way.

Leading up to that passage is a real high note workout, especially at 3 and 4 measures after 101 below: 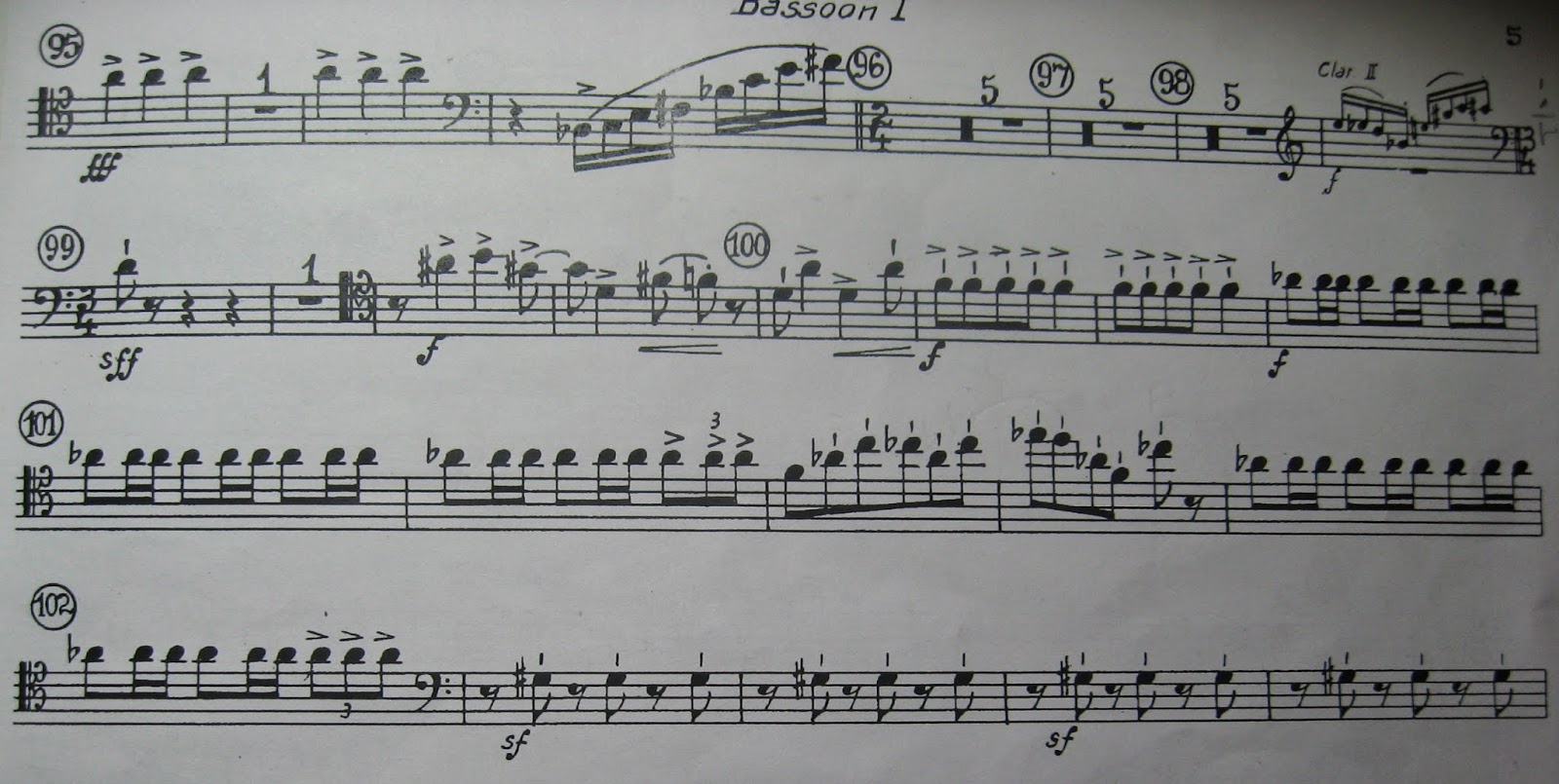 Just eking out the high Eb is a major accomplishment.  It's so fast that the high Ab 16ths actually have to be double-tongued, especially if one wishes to attempt to match the dynamics and character of the other orchestral instruments.

The Introduction (below) poses a counting challenge.  It's in 12, and I vividly recall how easy it was to lose my place the first time I played this in the orchestra.  This is one of those passages which truly becomes easier after you've played it once or twice.  It helps to keep in mind the obvious fact that there are four 32nds per beat.  (Sometimes it sounds as thought the woodwinds are playing the 32nds faster than they really are.)

The Columbus Symphony's recent Firebird performances featured the 1945 version, which is quite different from the more common 1919 suite.  The 1945 version contains more music from Stravinsky's original ballet score, including the Pas de Deux and the Scherzo, both of which are replete with exposed bassoon parts.  The Pas de Deux (below) is also a bit tricky rhythmically, especially at first.  It really helps to listen to recordings before your first rehearsal, so that if you end up getting off, you'll at least stand a chance of being able to figure out what's going on.  The solo one measure before 26 is an example of a passage where the bassoon should totally emerge from the orchestral texture.  In the Allegretto, the 16th note triplets must be accurately placed by subdivision of the beat.  Also, the triplets should be light and balanced with the other woodwinds. 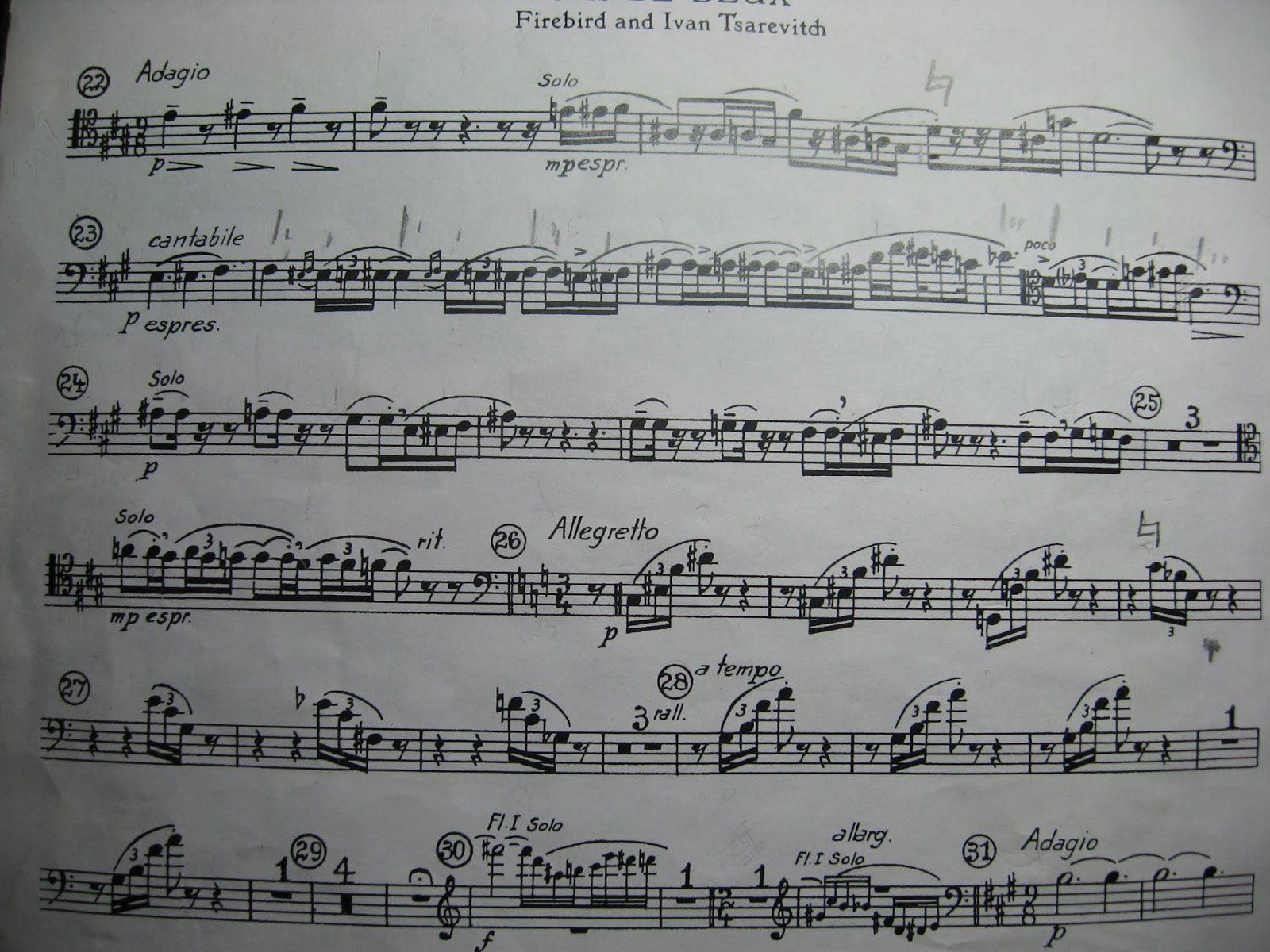 The bassoon playing in the Scherzo should also be ultra light, and the staccatos ultra short.  Yes, Stravinsky staccatos really are shorter than other composers' staccatos!  The reed I was playing for the recent performances was difficult to produce short staccato on,  but my priority for the reed was the Berceuse solo. 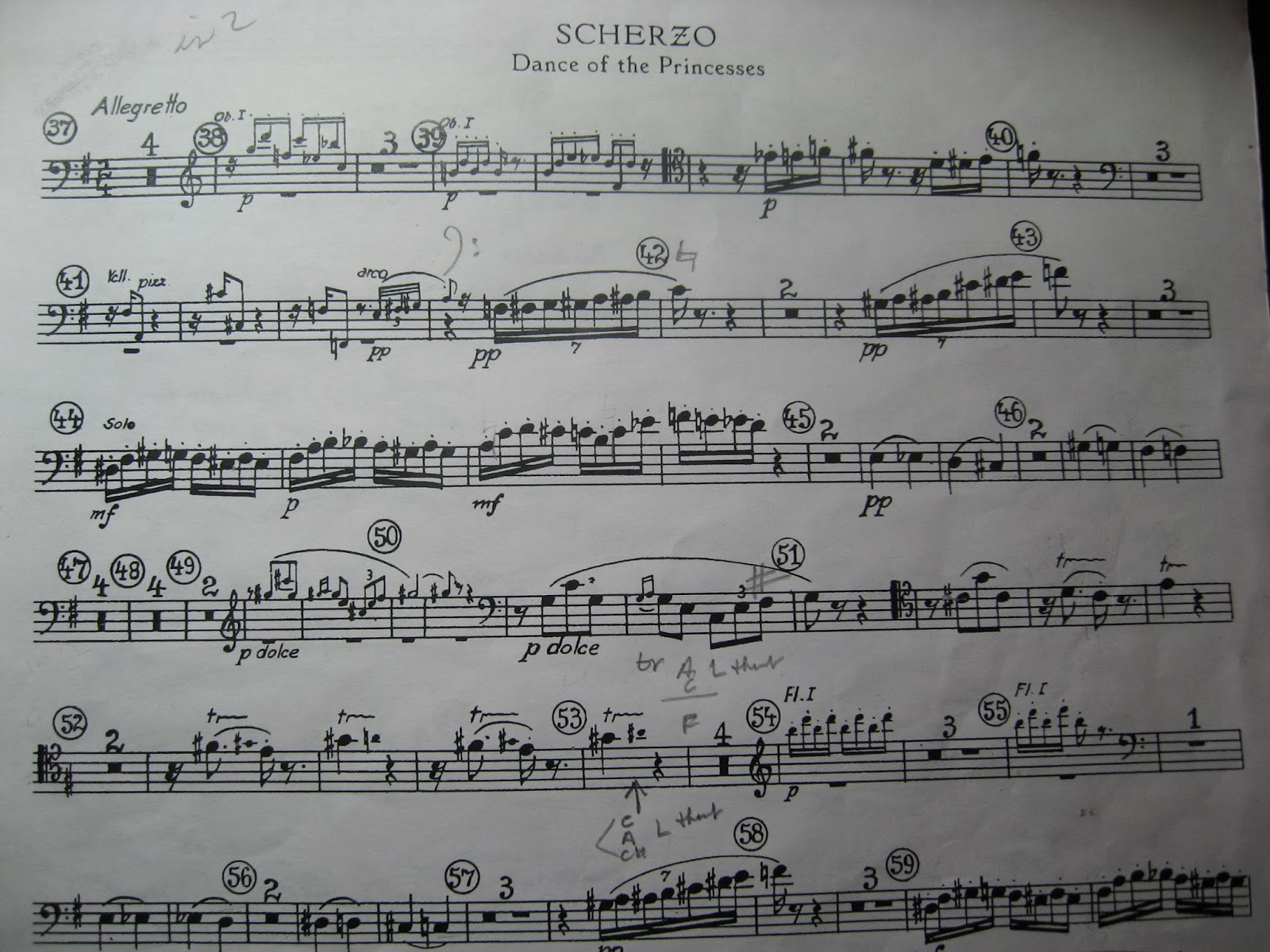 Once the orchestra finally reaches the Berceuse, it's time to forget about the short, loud, fast, high chaos from the preceding Infernal Dance (which was discussed at the beginning of this post).  It's time to completely chill.

My teacher at Eastman, K. David Van Hoesen, used to focus on finger motion, especially during my freshman year.  He insisted that I keep my fingers close to the bassoon for economy of movement, and he also spoke a great deal about the concept of imagining that you're molding clay with your fingers while playing legato passages.

Well, if there was ever a solo to mold clay on, it's this one.  To practice the Berceuse, I put the metronome on 60 (Stravinsky's tempo marking for the Berceuse), set the electronic drone on Bb, and set a goal of extreme smoothness.  I find it very easy to hear smoothness (or lack thereof) when playing with a drone. I suspect that the continuity of the drone encourages continuity of the player's phrasing.  Sometimes I record all of this, too, for good measure.  Sure, I've played the Berceuse before, but each time I play it has to be better than the last. 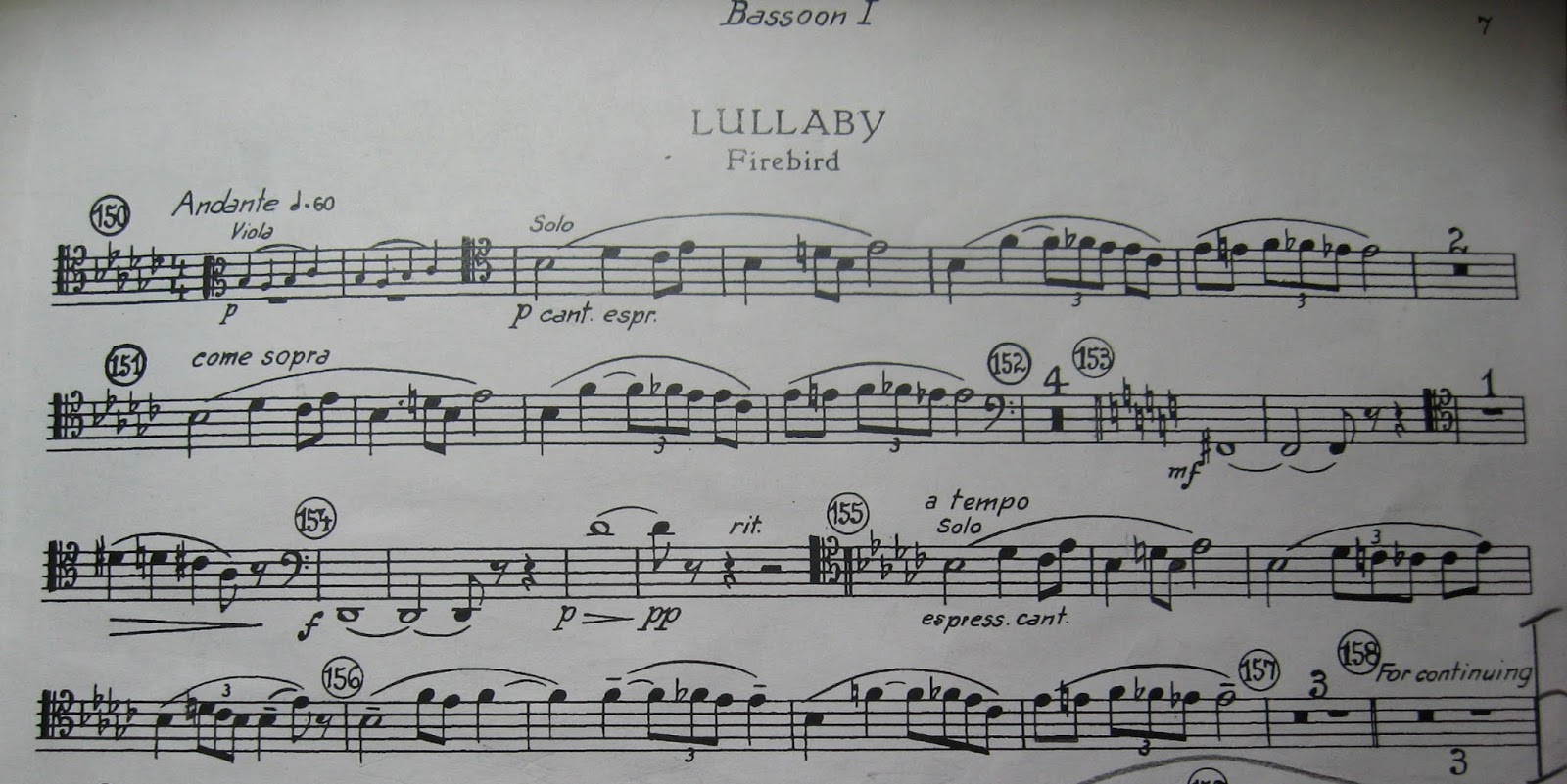 If other musicians in the orchestra report that they dozed off during the Berceuse, then you'll know you've done your job.