Composer and pianist Jean Francaix (1912-1997) was born in Le Mans, France to musician parents who encouraged the development of his clearly evident musical talent.  He began composing at age 6 and during childhood he captured the attention of the renowned composition teacher Nadia Boulanger who took him under her wing. She considered him to be one of her best students.

Francaix became popular during the early 20th century, especially after the formation of the Trio d'anches de Paris in 1927 by bassoonist Fernand Oubradous.  Francaix was quite prolific, producing more than 200 works including film music, but his passion was chamber music, especially for winds.

He avoided the group of composers known as Les Six.  Although he was friendly with Poulenc and other members of Les Six, Francaix felt that he had no business joining their group because he never questioned the traditional needs of his audience or the foundations of his compositional style.  His style may be described as being tonal, neo-Classical, elegant, rhythmically incisive, vibrant, light and well-grounded in tradition.

Francaix's stated goal of his music was to "give pleasure".

It's easy to admire such a rare degree of self-assurance and clarity of purpose.

Bassoonists who have performed his works are all too familiar with the technical challenges his parts present.  He likes to explore the bassoon's range through dangerously wide leaps.  (I often wonder if such leaps are any easier on the French basson for which Francaix wrote.....probably not.)

Francaix's interesting use of rhythm is an identifying characteristic of his music.  He's not afraid of the quintuplet, as evidenced in the Prelude of the Divertissement:

This section is full of quintuplets in one instrument juxtaposed over quadruple rhythms in the other instruments.  My teacher K. David Van Hoesen taught me to be at ease with quintuplets. He had a simple method for figuring out how to evenly fit 5 notes into one beat:  He told me to think of the word "geophysical" to divide a beat into 5 equal parts.  The words "geophysical year" would be used for adding the beginning of the next beat to the end of the quintuplet.

A fine example of Francaix's use of wide leaps is found in the Allegretto assai: 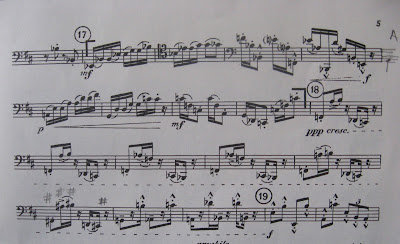 Measures 3 and 4 after 17 are particularly daunting.  However, as I like to point out to students, those two measures are mercifully preceded by two measures of Eb major arpeggios.  (I'm constantly looking for examples in the music I'm preparing to show students why we must practice our scales and arpeggios.)  And the next few measures after the daunting measures are also arpeggio-based.  Between number 18 and number 19 we have a perfect example of Francaix's endearing use of playful rhythms.

At the end of the same movement is another great example of why we practice arpeggios.  If you know your arpeggios, you won't even have to practice this (except for one measure before 22):

One of the most challenging passages for me begins 3 measures before 32 in the last movement:

Moving from high B to low C# in no time is asking a lot of the left thumb (and of the embouchure, which must suddenly jerk into place for the low C#).  The printed tempo of 92 to the measure is very fast!  Francaix must have known some awesome bassoon players, one of whom, as we know, was Fernand Oubradous (who must have practiced his famous and enduring Enseignement Complet du Basson religiously!). 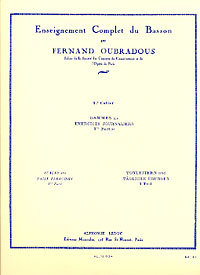 On January 4, 2017 at 2pm at the Columbus Museum of Art, four musicians from the Columbus Symphony will be performing a unique program on the museum's Mozart to Matisse series.  The program includes the Francaix Divertissement.  Here is the museum's description of the event:


Columbus Museum of Art, in partnership with Columbus Symphony Orchestra (CSO), presents this afternoon series pairing lectures exploring works from CMA’s collection with chamber music performances. Participants will look at depictions of costumed performers in art, such as clowns of the commedia dell’arte by Jean-Antoine Watteau and Pablo Picasso and ballet dancers by Edgar Degas, complemented by musical works performed by CSO musicians. Cost of this program is $20 for nonmembers and $5 for members. To guarantee your seat, please register early. This program is sponsored by CMA Docent Alums.

If you live in or near Columbus, we'd love to see you there!