Baroque masterpiece for orchestra (with a great bassoon part)

Jean-Féry Rebel (1666~1747) was a child prodigy violinist who studied composition with Jean-Baptiste Lully and served as court composer for Louis XIV.  At age 71 he came out of retirement to produce a shocking ballet, Les Élémens, in which he set out to depict the settling of creation into its natural order.

Rebel wrote of the work :“I have dared to link the idea of confusion of the Elements with that of confusion in Harmony. I have risked opening with all the notes sounding together, or rather, all the notes in an octave played as a single sound”.  Yes, he really does begin the piece with dissonance - the first "tone cluster" in the history of music!  The man was indeed a rebel.

Although the original score is lost, fortunately the parts (or some of the parts) were preserved.  The bassoon part, assuming it's original, was written for a virtuoso, as evidenced by the following passage in the Chaconne, in cut time: 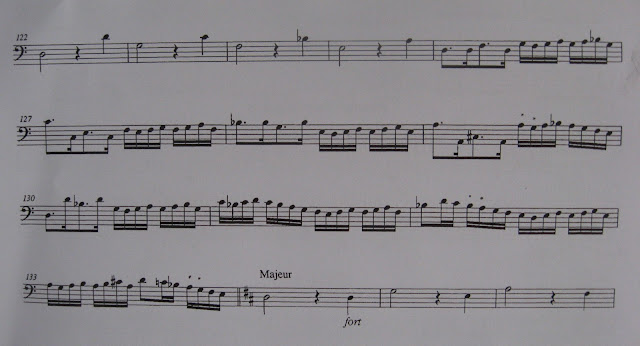 This reminds me of an intriguing fact I read recently.  Apparently double-tonguing used to be common on the bassoon in bygone eras, which explains some rapid tongued bassoon passages written by Handel, Vivaldi and of course Beethoven.  In more recent times, at least over the past century, double tonguing on the bassoon fell out of favor, possibly due to the fact that oftentimes it doesn't sound very good due to the presence of the reed in the mouth.  During the past 20 years or so, however, double tonguing has again become an important aspect of bassoon technique, fortunately for any bassoonist performing Les Élémens.

There is also a movement featuring the bassoon as soloist: 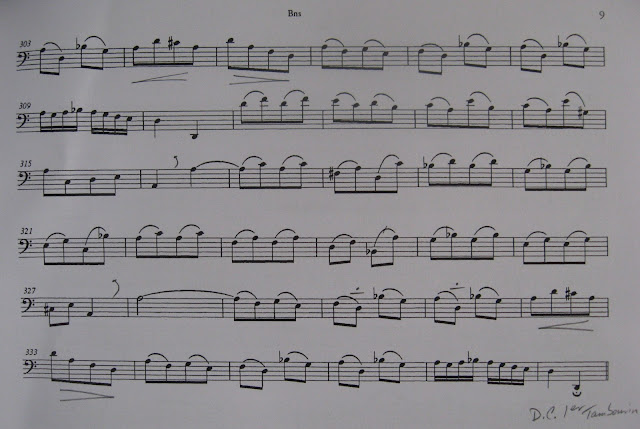 Here's a performance of the entire work, with a dancer:


If you live anywhere near Columbus, Ohio, please do come to hear the Columbus Symphony with Music Director Jean-Marie Zeitouni perform this piece live on Friday, Saturday or Sunday in the Southern Theatre.  Here are the program details and ticket-buying links:.