Nearly every musician on earth has probably heard the latest trending news about "bagpipe lung". This is old news for most of us, since scientists have been warning for years about the possibility of mold, fungi, yeast and pathogens lurking inside of wind instruments, ready to be inhaled into the lungs of the unsuspecting player.  That news has undoubtedly sent some former wind players scrambling to the string, percussion and keyboard instruments, but for those of us who steadfastly stand by our potentially deadly wind instruments, what can we do to ensure our survival?

Mold needs three conditions in which to grow:
Of the above conditions, the two that we bassoonists can affect are moisture and food. (I suppose we can also affect temperature by storing reeds in the freezer.  I don't know about you, but for me that would increase the likelihood of showing up for work without my reeds!)

It's best (necessary, in my opinion) to brush and floss your teeth before playing the bassoon.  (Yeah, I know.....the trending news on flossing claims that flossing is useless after all.  I'm choosing to ignore that claim while waiting for future studies which refute the current news.)   Any food particles which find their way into your reed or bocal can become food for mold.  Not only is that gross and unhealthy, but it also prevents the reed and the bocal from functioning optimally.

Although the reed must be moist for playing, we absolutely must take steps to dry out our reeds after playing.  I leave my reed container out of the bassoon case and open.  If I'm at a rehearsal or concert, I take out my reeds as soon as I get home.  First I rinse them with a strong stream of cold water and then set them out to dry.

For bassoonists, the cleanliness of the bocal is important.  The best way to keep a bocal hygienic (besides brushing and flossing of the player's teeth) is by running a clean bocal swab through the bocal at least once a month.  I wash my bocal swab after each use, since the last thing I want to do is send a germ-laden swab through my bocal.  After hand washing it with a mild soap, I allow it to dry outdoors in the sun, since sunlight is a natural sanitizing and bleaching agent.

One unique aspect of bassoon playing is that while playing, moisture accumulates in the bocal and at a certain point it begins gurgling or "knocking".  Some players seem to ignore it as if hoping the listener can't hear it.  The listener can hear it.  What do we do about it?

The first method described above is impractical during rehearsals and concerts; it simply takes too much time.  Also, unless you are alone in a practice room, it makes too much noise.  The second method produces even more noise, and can absolutely disrupt a rehearsal or concert.  Furthermore, it forces moisture into the instrument.  The boot can actually accumulate so much moisture that it begins to gurgle.

Gross though it is, it's that third method which I use, and I'd be willing to bet that most professionals use it.   If you're assiduous about keeping your bocal clean, it shouldn't pose any problems.  My bocal was purchased brand new fairly recently, and I've swabbed it religiously.  I don't think it harbors mold.  (One reason I don't like to try other people's bassoons is because I'm afraid that I'll accidentally suck the moisture out of the bocal through the reed, thereby ingesting its mold, bacteria, and heaven knows what else.  This act of sucking in the moisture is habitual for me, since any moisture inside of the reed or bocal can cause things to go wrong during rehearsals or concerts.  I'm constantly sucking the moisture in through the reed.)

Mold is more likely to grow in the reed than in the bocal because the cane itself provides food for mold.  The metal bocal does not promote mold growth UNLESS food particles have been allowed to accumulate inside it.  If you play the bassoon without brushing or flossing first, you may have created an environment for mold growth.  On top of that, if you don't regularly swab your bocal, well, some new habits may be in order.

On top of that, the swabs used for the boot and tenor joint must be kept clean.  It's not practical to wash those swabs after each use, unfortunately, but for heaven's sake, we should definitely wash them as frequently as possible, using mild soap and sun drying.

It's really that simple - that's all we can do.....brush and floss our teeth, dry out our reeds, swab bocals often, swab boot and tenor joints after each use, and keep those swabs clean and dry, thus holding "bagpipe lung" at bay!

How to sharpen a double hollow ground bassoon reed knife

How can you tell if your bassoon reed knife needs sharpening?  Just drop the blade, sharp side down, onto your thumb nail.  If it catches, the blade is sharp enough.  If it just glides smoothly on your nail, then it's too dull to function optimally.

The following instructions were presented to me by the late Norman Herzberg who was widely known for his Los Angeles studio work, his revolutionary reed making concepts and tool production, and of course his legendary teaching.

These instructions apply to the double hollow ground style knife, which is probably the easiest type of knife to sharpen.

Being an oilstone, it must be oiled before each use.  Norton sells oil for this very purpose.  It's actually a light mineral oil:

If your knife is in really bad shape, begin with the rough side of the sharpening stone.  (An oboist reading this post might react with horror.....how could a double reed player possibly be using a knife in really bad shape?   Well, bassoonists are generally much less religious about knife-sharpening than oboists, and for good reason.  For one thing, oboists are dealing with harder cane.  Oboists need a very sharp knife for precise cutting.  On the other hand, bassoonists often run into problems with accidental gouging and nicking of the cane with a very sharp knife.  Some bassoonists, according to rumor, never sharpen their knives.  My opinion is that bassoon knives should be kept reasonably sharp, passing the above-mentioned thumb nail test, at all times.)

First ensure that your stone is abutting a wall or some sort of stable object so that the stone won't move as you push the knife from the bottom to the top of the stone.  (For pushing down from top to bottom, you'll use your hand to hold the stone in place.)

Then smear the oil over the stone, covering it evenly. 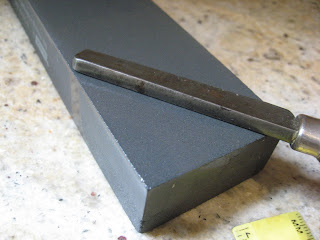 Then lift the back of the knife 1/8 inch.  That's the angle you'll maintain while sharpening

If your knife was already in decent shape, then probably only a couple of strokes on the fine side of the stone are needed.  Never use the stone without oiling it first!

Mr. Herzberg also mentioned that a hard Arkansas stone may be used.

If you're one of those bassoonists who doesn't worry much about the sharpness of your knife, give this a try.  Chances are you'll convert! 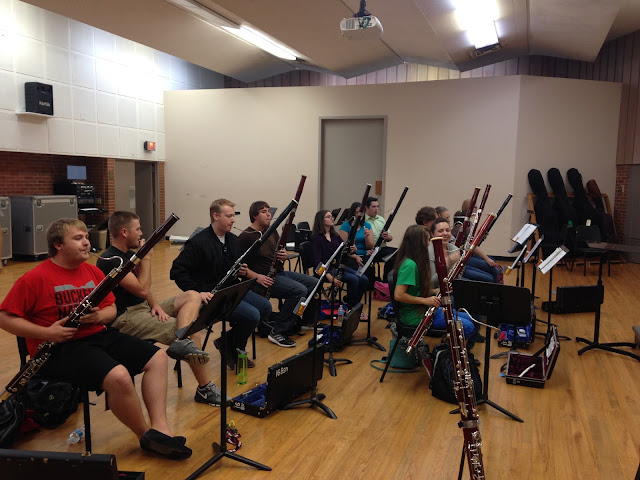 1. Take care of yourself

You already know what to do to able to function optimally:  eat sensibly and regularly, exercise, strive for 8 hours of sleep each night, make a few friends.  Balance is key.

Make a list of your priorities and stick to that list.  Chances are, socializing is not your top priority, so be careful that your social life does not accidentally rise to the top unbeknownst to you.  Each choice you make will have either a positive or a negative impact upon your college experience.

Establish a strict practicing schedule as soon as school starts.  Your success as a musician depends upon how much and how effectively you practice.  It may take you a while to figure out the best times to practice.  When I was a student at Eastman I liked to arrive at the practice rooms when the school opened at 7am so that I'd be able to choose one of my favorite practice rooms, and I always stayed until the school closed at 11pm.   I was determined to practice as much as I possibly could.  (No, I was not in the practice room all day.  Plenty of other things happened between my early arrival and my late departure.)

4. Know yourself and work with that knowledge

Know yourself and plan accordingly within reason.  For example, I'm an extremist. and that's why it suited me to arrive when the doors opened and leave when they closed at Eastman each day.   If you're gregarious, then you might benefit from practicing at peak times.  If you're a night owl, maybe it would behoove you to save your practicing for later hours when you are most energetic.

If you're not a morning person and you have a class at 8am each day, then you're going to have to find a way to force yourself to make it to that class on time.  (Try going to bed earlier!)  Do not allow yourself to skip classes unless you are deathly ill.  You have chosen to attend college and to pay a lot of money to do so.  Therefore it makes no sense to put forth anything less than wholehearted effort.

Pay rapt attention to the professor of your instrument.  Take notes during lessons, or if the professor allows, record (audio or video) your lessons.  If you hang on his or her every word (or playing demonstration), you'll learn faster.  Be sure to actually follow his or her instructions assiduously.

Listen to music of your chosen genre constantly in order to establish and inspire your musical goals and preferences.  Attend live performances and listen to recordings.  Of course, as a standard aspect of preparation, always listen to recordings of any music you're working on or performing.

Watch for distractions......they're everywhere.  Freshman year is perhaps NOT the best time to master Pokeman Go, World of Warcraft or Call of Duty.  Save Netflix for planned relaxation times.

Choose your friends wisely.  If you're lucky enough to befriend a fellow music student who is a superior musician, you'll learn from that friend.  I hung out with a phenomenal flute student who was studying with James Galway during our freshman year at Eastman.  I learned a great deal from joining my friend in exploring interpretations of musical phrases, in listening to recordings of the world's greatest musicians, and in listening to the incomparable James Galway perform in person.

Say YES to any invitation to play your instrument, whether you'll be paid or not.  You need experience!

If any of your classes or assignments are confounding, don't hesitate to let the professor know right away.  Your fellow students may be of assistance also.  Everyone wants you to succeed!

If you're having trouble adjusting to college in any way, don't hesitate to use the resources at your disposal.  As far as I know, every college offers professional counseling for students, or you may wish to talk to a professor or administrator.  When I was a freshman I confided in my bassoon professor K. David Van Hoesen about an upsetting situation with my two roommates.  He called the dean, and that very day I was given a single room!

Attending college is life-changing. Have fun within reason, and rest assured that your hard work will pay off later.