The Overture to Mozart's Le nozze di Figaro (The Marriage of Figaro) is one of the top five bassoon orchestral audition excerpts. In fact, this overture is probably one of the top 20 pieces performed most frequently by symphony orchestras. It's short, showy, charming, and, well......it's Mozart!

We bassoonists spend many an hour perfecting our parts to this overture. From our work on this bassoon part we develop a smooth, discreet, agile style of playing which blends admirably with strings (hopefully). This delightful overture has raised the standard of playing for more bassoonists more than any etude ever has, I'm quite certain.

OK, so bassoonists are well aware of the overture to The Marriage of Figaro. We can pretty much play it in our sleep. But what about the rest of the opera?

Many consider Mozart operas to contain some of the most glorious music ever written, and the comic opera Le nozze di Figaro is a gem of the operatic literature. This is what Johannes Brahms had to say about it:


"In my opinion, each number in Figaro is a miracle; it is totally beyond me how anyone could create anything so perfect; nothing like it was ever done again, not even by Beethoven."

The plot a complex, far-fetched soap opera taking place on the wedding day of Figaro and Susanna, who are servants of Count Almaviva.  Figaro is dismayed to learn that the Count has his eye on Susanna, so he devises a plan to send the teenage boy Cherubino disguised as Susanna to meet with the Count. Unfortunately, the Count arrives unexpectedly before they manage to pull off the scheme. Then it turns out that Figaro owes money to a certain Marcellina. Sadly, he had promised the older woman that he'd marry her if he couldn't cough up the money. Marcellina shows up with her lawyer Bartolo to collect either the money or the marriage when suddenly it is discovered that Marcellina and Bartolo happen to be the bioparents of the adopted Figaro. They decide to hold a double wedding with Marcellina marrying Bartolo and Figaro, of course, marrying Susanna. Meanwhile, the Countess has devised a scheme of her own to win back the attention of her husband. She dresses as Susanna and meets with the Count. Her trick pays off and her husband is besmitten anew.

Here is one of the many unforgettable arias from the opera, this one delivered by the adolescent boy Cherubino (nearly always performed by a seasoned mezzo-soprano, in this case Rinat Shaham):

Bassoonists, see if the following aria, Pargi, Amor, sung by the Countess (Jessye Norman in this case) at the beginning of the second act rings a bell:

Yes, indeed. For this aria Mozart used the motif from the second movement of his own bassoon concerto!  If we ever need inspiration for preparing that movement, now we know where to turn.

If you're a bassoonist, there's a chance that someday you'll perform one of the bassoon parts for this opera, if you're lucky, as I am this week with the Columbus Symphony and Opera Columbus.
But I must warn you that there are a couple of fast tonguing passages in this opera which rank among the fastest passages I've ever been asked to play. Ever.

The first such passage shows up at the end of Act II: 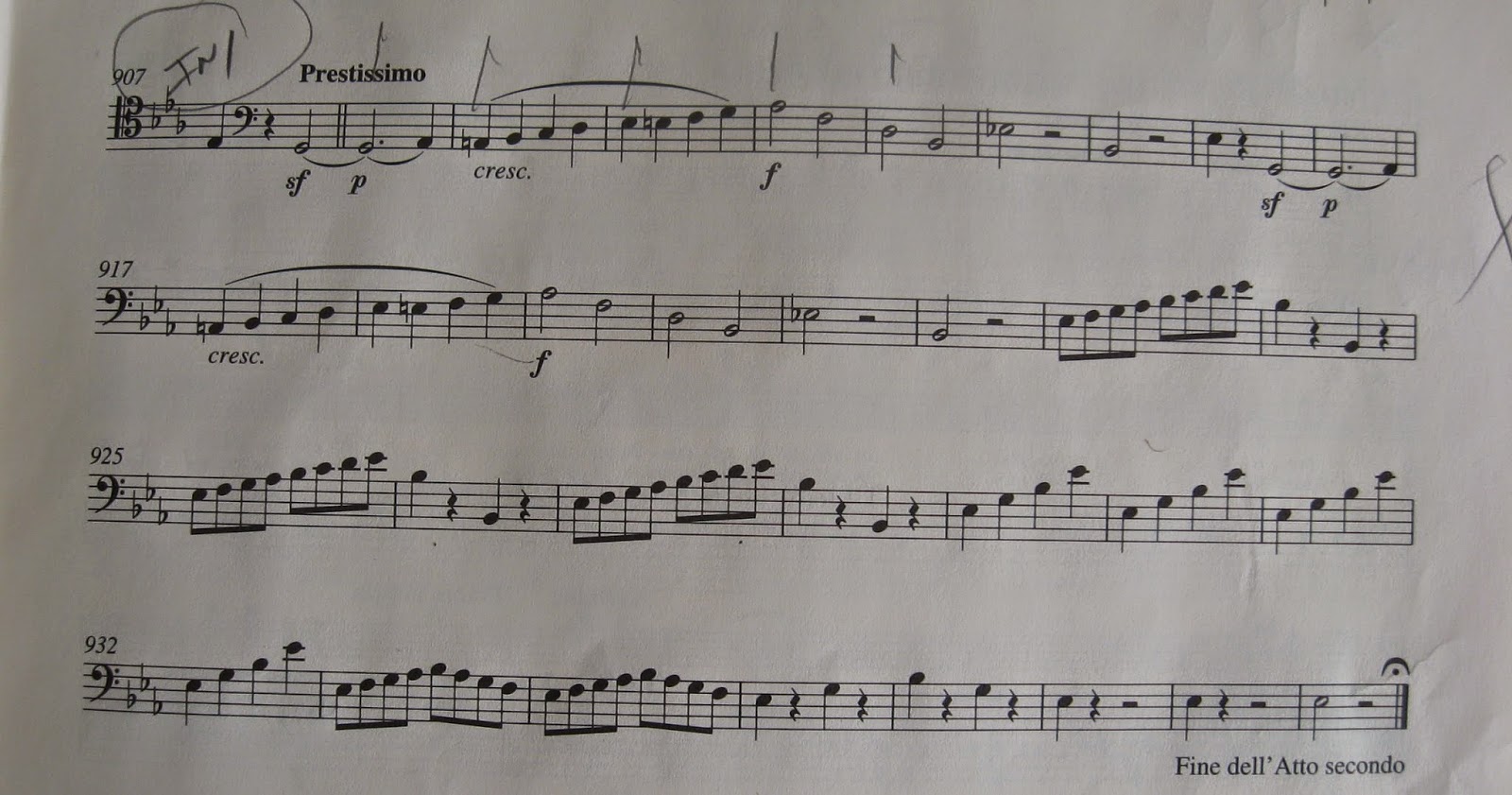 At first glance, it doesn't look like much. But I assure you that the Prestissimo is fast, and I mean FAST. It's in one - a fast one. I swear, I'm double-tonguing as fast as I can to get through this. It almost sounds comical (it is a comic opera after all).

The next example is even more formidable, although, as in the first example, it looks harmless enough until you actually realize how fast it is: 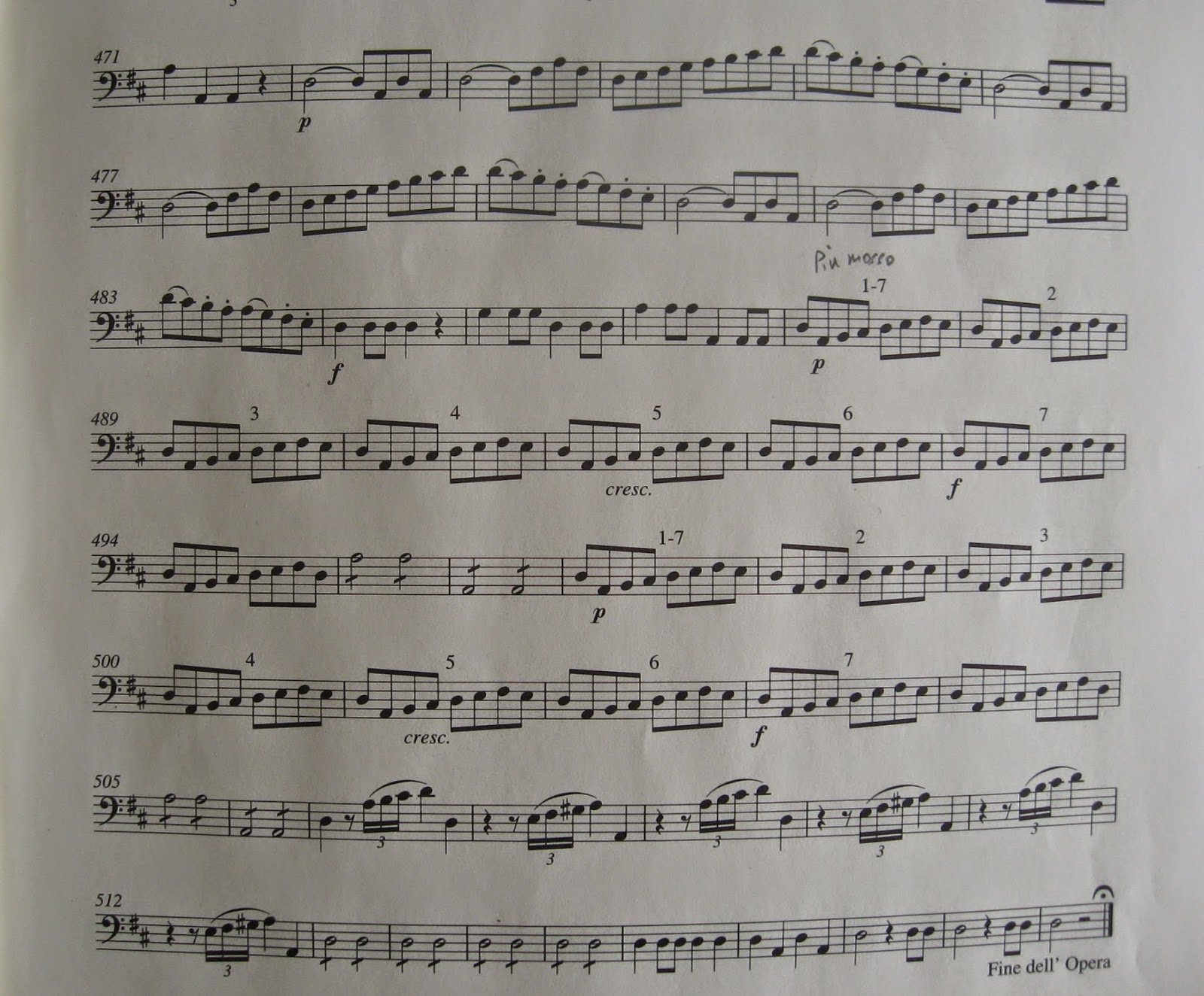 In measure 487 above, notice the words "Piu mosso" penciled in. Yes, it's faster. The whole page is in one, but at 487 the tempo is fast as can be, and as you can see, there's a lot of tonguing to be dealt with. My advice is to practice the passages all slurred to be sure that your finger technique is flawless. That's at least half the battle. Then practice your tonguing on a single note up to tempo to assure yourself that you really can tongue that fast. Of course, the assumption is that you are able to double tongue really well. This passage and the one above it are really too fast for even the fastest single tongue. Both of the above excerpts appear in the 1st and 2nd bassoon parts.

Once you've practiced the notes with slurs and then the double tonguing on a single note up to tempo, then all you have to do is put the two together. While playing it in the orchestra, try to remain calm and be aware of the tempo being played by the rest of the orchestra. It really is playable, although the first time we read through it I didn't think so!

All that tonguing is a small price to pay for the privilege of performing this miraculous Mozart masterpiece, as I'm sure you'll agree.  If you live in the Columbus area, please consider attending one of our performances this weekend. As an added enticement, central Ohio native Adam Cioffari (whose mother is bassoonist Cynthia Cioffari) will be appearing as Figaro!