The dog ate my reed

Although my dog is widely known for his ability to keep my playing in check through his selective howling during my practice sessions, he harbors an unfortunate addiction.  He loves to sneak around behind my back, snatching and devouring any wayward bassoon reeds.

I managed to pry this one from his clenched jaw before it embarked on its intended journey through his digestive tract.  He did, however, manage to ingest the most delectable part of the reed: the ever-so-carefully crafted blades.

Why?  Well, my music stand is overloaded this week: 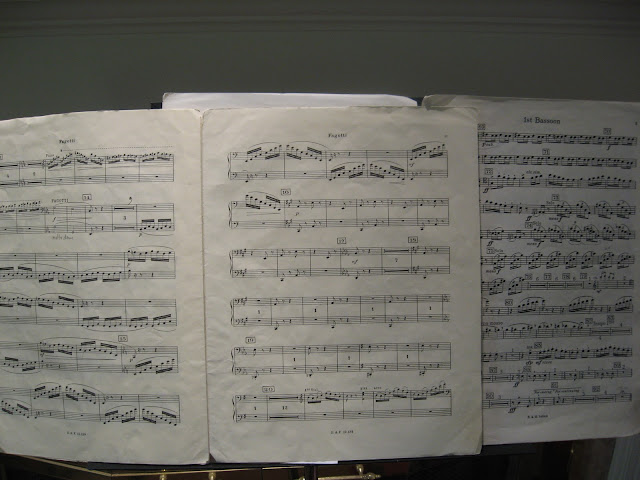 This is the list of pieces I am preparing to rehearse and perform this week, beginning tomorrow:

You can see why I think I need a strong embouchure (among other things).  I am daunted!

Yet, as always, I remind myself that anyone who is employed as a classical musician is fortunate.  I'm not sure how I'm going to manage to perform each of these pieces at a professional level all within the same week, but I'm ready to give it my best shot.

I've seen that expression on my dog after he has crunched up a reed. He can hear a reed hit the floor 2 rooms away. I hope your embouchure reed helps with that frightening schedule.

This would be a nightmare for me. All my reeds are sitting out in an open reed case, at perfect doggie height. They've never shown interest, fortunately, but they've chewed up everything else, maybe I need to worry about my reeds too.

While I can't say I've experienced a dog eating my reeds (I'm a student living in an apartment, and I haven't had the time to take on a dog), I can say that I'd be crushed and possibly on the warpath if it did happen.

However, I'm giving my very first doctoral recital in about a month, and I'm going to give your embouchure strengthening reed plan a try. I have nothing to lose by it and many good things to gain. I'll try to chime in and let you know of the result.

Thanks for your blog! I've been following you discreetly since my teacher, Dr. Janis McKay at U of Nevada - Las Vegas, forwarded it to me a few months ago.

Wow, the "embouchure maintenance" reed is really a fantastic idea. I have had old reeds in the past and wondered if they could serve that purpose. I'm glad they can, and I'm definitely going to tote one along with me. I have two adjusted reeds with Duco cement drying and I am worrying that my mischievous cats will get to them before I do. Should have closed the door to that room before I went to work...

I have a question about your previous post. What do you use to mark your reeds? Also, I have never seen writing near the tip of the reed, usually just toward the tube.

Rich, I can report that yes, the embouchure reed did work. I made it through the week with no embouchure concerns whatsoever!

TFox- you never know when those reeds might suddenly start looking tasty! I've learned the hard way to keep them well above doggie height.

KC- best of luck to you on your doctoral recital! I'm sure that an embouchure strengthening reed will help. The way I see it, we have enough to worry about without embouchure being one of the factors!

Angeline, I use either regular #2 pencils or extra fine point Sharpies to mark the reeds.

The markings you see at the top identify the cane, so that I wrap with the corresponding color thread. That top will end up being cut off when I finish the reeds. In the photo, the top had not yet been cut because I don't cut off the top until it's time to finish the reed for playing.

And I'd definitely keep an eye on those cats!!

Great, I never knew this, thanks.