Do Musicians have Better Brains?

Apparently they do.  According to a recent post on Freakonomics blog, musicians' brains are rather highly developed!  Check it out:

(Photo: Lifesize)
A new study (abstract here; summary here) argues that musicians have more highly developed brains than the rest of us. The research relates the concept of high mind development to the potential to become really good at something:


New research shows that musicians’ brains are highly developed in a way that makes the musicians alert, interested in learning, disposed to see the whole picture, calm, and playful. The same traits have previously been found among world-class athletes, top-level managers, and individuals who practice transcendental meditation.

Using EEG‘s to measure brain activity, researchers concluded the following about the brains of musicians:


They have well-coordinated frontal lobes. Our frontal lobes are what we use for higher brain functions, such as planning and logical thinking. Another characteristic is that activity at a certain frequency, so-called alpha waves, dominates. Alpha waves occur when the brain puts together details into wholes. Yet another EEG measure shows that individuals with high mind brain development use their brain resources economically. They are alert and ready for action when it is functional to be so, but they are relaxed and adopt a wait-and-see attitude when that is functional.

Fred Travis emphasizes that everything we do changes our brain. Transcendental meditation and making music are activities people should devote themselves to if they wish to change their mind in the right direction. But you can make good progress by following common health recommendations: get enough sleep, work out physically, eat healthily, and don't do drugs. How you think also plays a role.

"If you are a very envious, angry, mean person and that's the way you think about people that's what's going to be strengthened in your brain. But if you are very expanded and open and supportive of others, there will be different connections," says Fred Travis.

Just imagine the brainpower of an open, supportive, health-conscious musician who practices transcendental meditation!  And how about those former musicians who are now orchestra administrators - their brain activity measurements must be off the charts........
.
Posted by B.S. at 1:07 PM No comments:

One of the many benefits I've experienced from maintaining this blog is that I receive fascinating and informative emails from bassoonists and composers from all over the world.  Recently I heard from Japanese composer Kohei Kondo (check out his website here) who lives in the west part of Japan, in Hyogo Prefecture.  He reports that following the earthquake in East Japan, he composed a work in memory of the victims of the earthquake and nuclear reactors.  It is written for solo bassoon, entitled Prayer on the Seashore, Op. 121.

Here is a recording of bassoonist Robert Ronnes of Norway performing the world premiere of Prayer on the Seashore:

The PDF is available for downloading on Kohei Kondo's website.  Although the composer has arranged the piece for other instruments, its haunting, pensive quality is particularly well-suited for the bassoon, for which it was originally written. 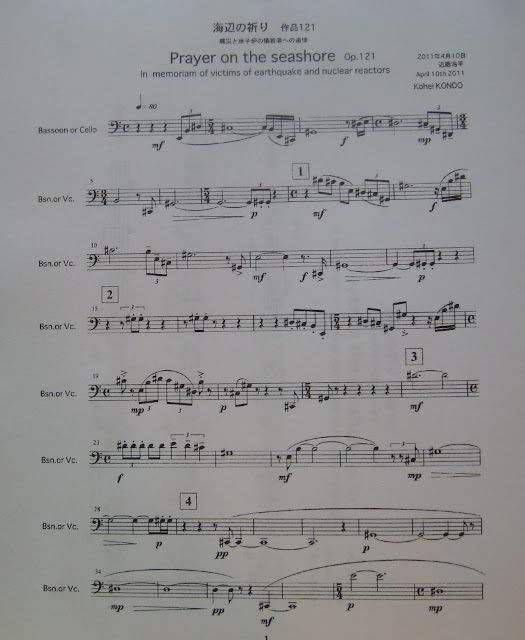 Mr. Kondo encourages us to perform his piece.  Music plays a healing role in tragedy, as was so remarkably evidenced by the countless concerts which took place in the aftermath of 9/11.  Mr. Kondo mentioned in his emails how grateful Japan is for the worldwide support following the disaster.  His composition offers us (and our audiences) a meaningful way to acknowledge what the Japanese people have endured.

When you visit Kohei Kondo's website, be sure to notice his Quartet for Flute, Bassoon, Violin and Cello "Where the Ocean Current Passes 2" Op. 102.  (Its PDF is also available for downloading.)  This piece was a prize winner in the 2010 "Kland der Welt - Ostasien" composing competition of Duetsche Oper Berlin.

Mr. Kondo requests that we inform him by email at R5656m@aol.com if we perform one of his works, and I predict that many of us will!

April is the Cruelest Month

The Wall Street Journal recently featured an eye-opening article by Terry Teachout entitled April is the Cruelest Month for Purveyors of High Culture.  Mr. Teachout lists various April 2011 examples of nationwide performing arts fiscal crises, including the shutdown of the Syracuse Symphony,  the New York City Opera's decision to suspend plans to announce its 2011-12 season pending the outcome of a serious review of its finances, and most shocking of all: the Philadelphia Orchestra's bankruptcy filing.
"If the Philadelphia Orchestra can get into a hole so deep that bankruptcy is the only option, then no orchestra is safe."
Uh-oh.  What exactly does this mean, especially to those of us who have committed our lives to being orchestral musicians?

Sam Goldwyn: "If nobody wants to see your picture, there's nothing you can do to stop them."

Goldwyn's famous quip isn't funny anymore.  As Teachout points out, if people can't afford to buy tickets to your performances, there's nothing you can do to make them buy a ticket.  The old business model for symphony orchestras which relied heavily upon advance subscription sales to sustain the orchestra is not working anymore.  Our present-day society tends to buy concert tickets at the last minute, refusing to commit in advance to attending future performances.

Mr. Teachout speculates that unions are part of the problem, as they insist on attempting to protect the musicians from having to pay for the mistakes of poor management.  As I said myself in a  past post, it is infinitely more beneficial for unions to act in a cooperative rather than a combative manner with management.

The level of public interest in what we're selling (live symphonic music) has diminished, whether we like it or not, and change is necessary.  Those changes may include a new business model, reduced season length and reduced salaries. (All three changes have been made by my employer, the Columbus Symphony.)  The very challenging goal which current orchestra managements face is to succeed in slashing costs without also slashing artistic quality.   The orchestras which succeed at that will be the ones left standing ten years from now.

What can the individual musicians do?  Some musicians I know have chosen to get out of the field altogether after realizing how impossibly difficult it has become to earn a steady and reliable income.  Many others have taken on more private students or college teaching jobs to supplement their orchestral income.  Double reed players often sell their handmade reeds.  Some musicians become extremely devoted to chamber music (and those musicians quickly learn how difficult it is to market and sell your product!).

Those of us who choose to remain committed to our jobs playing in orchestras are better off if we find a way to accept the changes affecting the performing arts (which are occurring whether we "approve" or not!) and flex accordingly.  If an opportunity arises in which we might be able to help our orchestra in some way, whether it be in the form of some sort of outreach or fundraising event, or exploring new ways to connect with our audiences, or simply saying yes to a management request, go for it!