In 1918 Igor Stravinsky, who was living in Switzerland at the time, collaborated with Swiss writer C.F. Gamuz to create L'Histoire du Soldat (The Soldier's Tale) which was meant "to be read, played and danced."   The story is about a soldier (whose soul is represented by the violin) making a deal with the devil (the percussion).  Stravinsky and Gamuz wanted to put together a "portable" production which would be easy to tour with, so the instrumentation was limited to a septet (violin, clarinet, trumpet, string bass, bassoon, trombone and percussion).  They also planned to augment the production with a handful of characters who would narrate, act or dance.

Stravinsky had not yet heard jazz, but Gamuz had.  In fact, Gamuz had brought back some jazz scores from a visit to the U.S., and Stravinsky used jazz influences for the first time, along with frequent meter changes, in L'Histoire. Apparently the bassoon is substituting for the more jazz-oriented saxophone in L'Histoire.  (Rumor has it that Stravinsky did not care for the saxophone, luckily for those of us who play the bassoon!)

Along with several other Columbus Symphony musicians, I had the good fortune to participate in two presentations of L'Histoire recently.  Columbus Symphony violinist Olev Viro organized and conducted the performances.  One of the performances took place in Yellow Springs, Ohio, with an acting troupe from that area who used the Kurt Vonegut libretto.  The other, using the standard libretto, was presented in Columbus using dancers from The Ohio State University and local narrators.

The following video, based upon our Columbus performance with OSU dancers, was produced by WOSU Public Media Art Zine:

For any bassoonist encountering L'Histoire for the first time, I have three words of advice: Music Minus One.

I owned this Music Minus One when I was in high school, and back then I spent quite a bit of time playing along with the recording just for fun.  Music Minus One can also be really helpful in actually preparing for a performance.  Stravinsky's bassoon parts are always challenging, and this practice aid is most welcome.  L'Histoire's specific challenges include tricky meter changes, technical passages, and intonation with the clarinet in the Pastorale movement (which can be heard toward the end of the above video).  Although L'Histoire is a septet, it has shown up on orchestral bassoon audition lists.

This is the bassoon part for Music for Scene 2, "Pastorale": 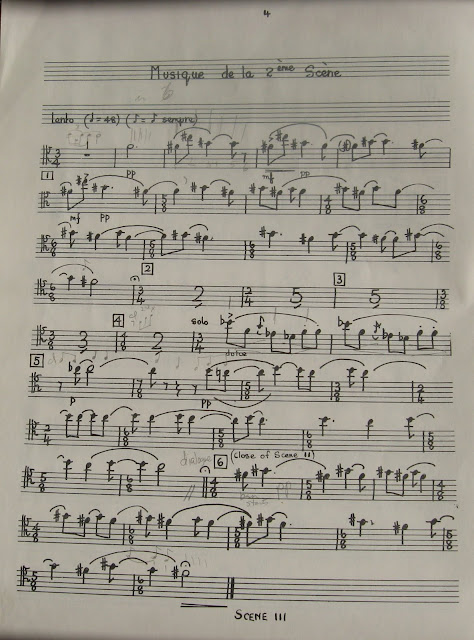 It's important to have the right reed for this.  The reed has be reliable on high C# and on delicate attacks of each note.  When I played this movement all of my focus was on the clarinet part - specifically, the intonation of the clarinet.  It helps to be sure of one's own intonation in this movement before the first rehearsal, and then, during rehearsals and concerts, to be flexible in tuning to the clarient.  Watch out for the extensive passages involving only two notes, high F# and high G#, in the bassoon part, such as from number 6 to the end.  It's not simply a matter of changing from one note to the next at the right time; each note has to lock in, intonation-wise, to the clarinet line, and that requires ultra-careful listening and flexing.

The Marche Royale movement has a couple of tricky passages: 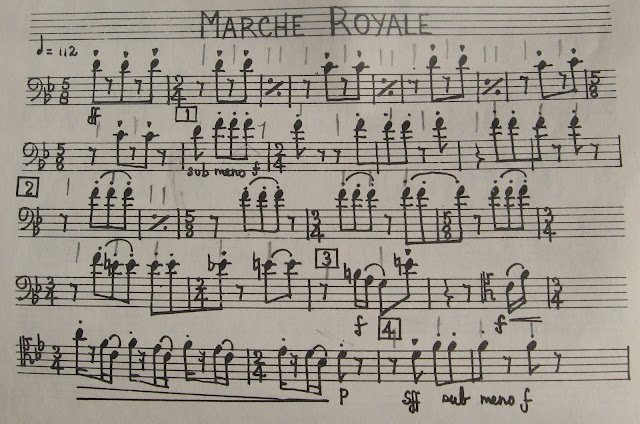 Placing each eighth note on the correct beat or half beat is the first goal.  Secondly, the exposed passage beginning 3 measures before number 4 can be a finger-twister unless the tempo is unusually slow.  (Stravinsky was thoughtful enough to write in the tempo markings, though...)  As with any finger-twister, it must be practiced in a slow and relaxed fashion until the fingerings are automatic (and accurate!).

This is also from the Marche Royale movement: 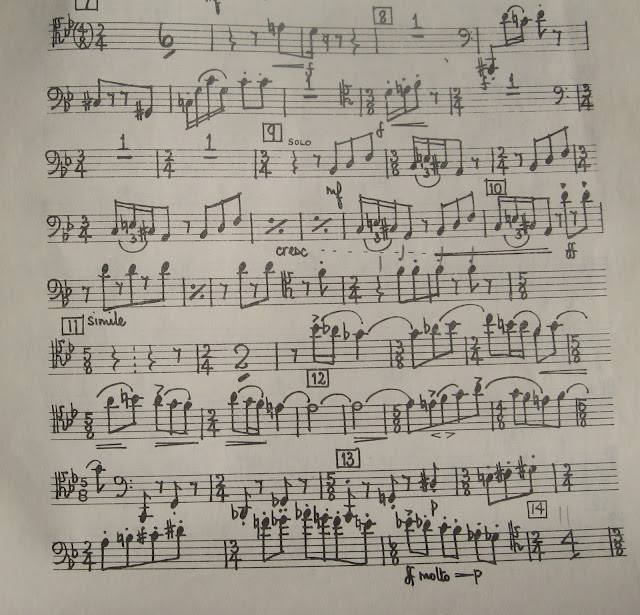 A quick glance at the above excerpt show how important it is to have a rock-solid steadiness of eighth notes throughout.  Otherwise, the chances of derailing are high.  The bassoon solo at number 9 is an example of a passage where the bassoonist must be rhythmically reliable and unwavering.  Four measures after 11, the bassoon is in unison with the trumpet.  My policy regarding intonation in unison passages is that the louder (or loudest) instrument rules.  Since pretty much every instrument is louder than the bassoon, I am usually forced to  follow rather than lead in such passages.  But learning to accurately match another player is a skill worth developing.  All it requires is the willingness to listen, and then flex accordingly.

To me, the Ragtime is the most difficult movement for bassoon: With Stravinsky's tempo of 192 to the eighth and constant meter changes, this movement can easily end up being a "ragged" ragtime!  The measure at 27 is, in my opinion, the most technically difficult measure of the entire bassoon part: 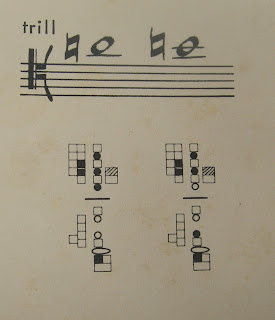 The Danse du Diable (Devil's Dance) movement moves along at a fast clip (138 to the quarter): 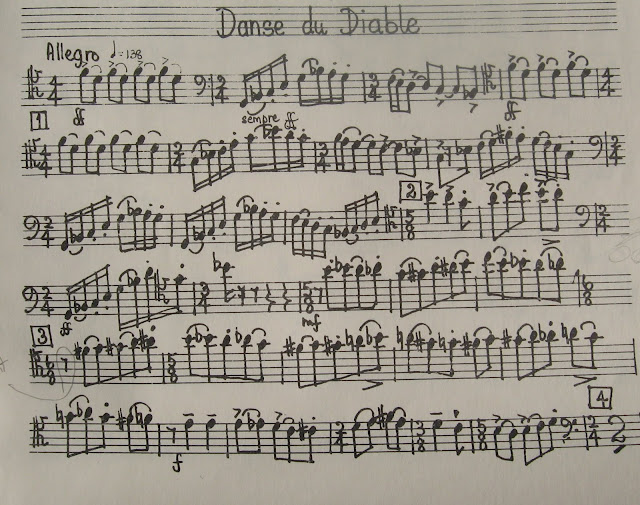 The 16ths can be single- or double-tongued, but I found that double-tonguing seemed to fit better.  (The last thing the bassoonist should do here is become bogged down with a single tongue which can't quite keep up.) Marked ff, the 16th note passages must be played aggressively.  But be ready to play sweet-sounding eighth notes in the high range at number 2 and beginning 3 before number 3.  No question, Stravinsky knew how to put the bassoon to good use!

I always read your posts in absolute respect and admiration for your double fold talent---music and writing. But you are amazing to take the time to post excerpts, pictures, and so many visual and even audio demonstrations and post them on your blog. Not only are you a professional musician, but you are an astounding wealth of resources, putting them together for the benefit of others. I've rarely seen such thorough generosity, and I can tell you that I've never appreciated a blog or even online source as much as I appreciate this one. God bless!

Wow, Amy. Thank you for your very generous compliments! I am honored by your appreciation.

@Amy - you may contact me via Betsy for Fan Club application materials ;)

Hi Betsy!
Wow these excerpts were very good to have for a short notice reading of the piece. Thanks much, love the blog, keep it up!