When the music stand is empty.... 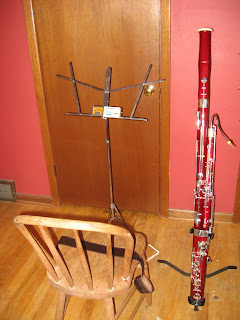 This is when I practice best, when the music stand is empty.  There's no major performance right around the corner that I must prepare for.  I am well aware of certain performances coming up this fall, but I believe that the practicing I'm doing now, without any music on the stand, will pay off later.

August is the perfect month for this type of practicing.  I recall August 2 years ago, when I was really starting to enjoy practicing nothing but slow scales and arpeggios, paying special attention to the beginnings of articulated notes.  (It was at this time that I stopped referring to note beginnings as "attacks," since I sought non-explosive note beginnings!)  Midway through August I received a phone call from a woodwind colleague in the orchestra who informed me that that parts to the John Adams Chamber Symphony had arrived.  Immediately, I had to start woodshedding the incredibly difficult bassoon part which was to be performed in early fall.  I was disappointed to have to divert my attention away from the work that was really productive.

This August, I have been trying to find the best location in my house for practicing.  I think that the ideal practice room is neither too live nor too dead.  Recently I came to the conclusion that I've been practicing in too dead a room.  (I was going through some old recordings, and came across one of a mystery bassoonist from several years ago.  It sounded impressive, and I thought that I'd really like to sound like that.  Then I noticed that the recording was labeled and dated.  It turns out that I was the mystery bassoonist, shockingly.  I was playing in the house I used to live in, which had wood floors and high ceilings, and far superior acoustics to where I live now.)  I often record my practicing, and the dead acoustics I have now are not flattering at all!

In my current house, only my bedroom has hardwood floors, so now I'm practicing there.  It is a small room with a low ceiling, though, and the bed absorbs a lot of the sound. The room adds a ring to the sound which I'm still getting used to.

When I was a student at Eastman, I used to practice in all types of practice rooms- sometimes in really dead rooms, sometimes in more live ones, and when I really wanted to sound my best, like right before the concerto competition, I practiced in the very echo-y stairwell (late at night, when almost everyone had left).  I remember speculating with fellow students that if we could manage to sound good in a dead room, then we could certainly sound good anywhere!  That may be true, but I think we benefit from hearing ourselves in a variety of spaces so that we are never shocked by sounding different in an unfamiliar acoustical environment.  And there's no doubt that good acoustics are inspiring.

So now, in my new practice space, I am getting used to hearing an unfamiliar ring created by the bedroom floor, ceiling and walls.  If the room were bigger, it might be a great practice space.  But the small size causes some odd acoustics.  For example, if it sounds as if 2 notes are not matching in sound, it could be that the sound waves are refracting.  I will be able to tell only when I play those same notes in a larger room where refraction is less likely.

At times like this, when the music stand is empty, I don't plan my practice sessions.  I try to let the bassoon decide.  I usually start with some sort of slow scale, paying very close attention to every last detail, from the note beginning of the first note to the taper of the final note, and making sure that pitch and tone match from note to note.  I also aim for a smooth, connected flow from one note to the next, as if blowing up a balloon while playing the scale.

Often, I will find myself focusing on a particular scale or arpeggio based on whatever seems to be needed.  (That's what I mean when I suggest letting the bassoon decide.)  For example, I have been uncomfortable with the pitch of Bflat 2 lately.  It wants to be sharp.  So this is the perfect time to wallow in Bflat major for a while, playing slow scales, thirds, arpeggios, long tones.  My Heckel bassoon (#15421) is still very new, and I believe that the notes can be trained to play in tune.  Although I don't look at it constantly, I have my Boss TU12H tuner on the empty stand in front of me, so that I can glance at it whenever I hear something askew.

I like to spend time in the extreme high range also.  I have some high solos coming up this season, and my new bassoon has yet to be tested publicly in the high range.  When I glance at my tuner during high E (E4), I am thrilled to see what my ear also tells me- that the note is not flat the way it is on so many bassoons!  I try to spend a lot of time playing various types of scales and exercises in the high range.  Most bassoonists believe that the high range of a new bassoon takes a long time to break in, and our orchestral parts rarely take us up into the stratosphere!

Invariably, I end up playing excerpts from some of the pieces coming up this season.  (Orchestras seasons generally run from fall until the end of summer, so the Columbus Symphony's 2010-11 season begins in the fall.)  Try as I might, I just can't forget about the job-related challenges!  But I stick to my August rule of no music on the stand.  Sometimes i play a melody by ear just because i think it's a good idea to be able to do that.  I also take the time, during August especially, to hear each note in my head before I play it.  August is a great time to really get in touch with the instrument, free from job-related responsibilities.
Posted by B.S. at 9:08 PM

I completely agree about practicing for a performance versus productive practicing. It feels like a luxury to be able to spend time focusing on long tones and scales (the things my students have not yet learned to enjoy).

I had the same experience with practicing in different spaces, too. Last night I got a little practice time in my campus's recital hall, and I was shocked to discover an intonation problem that I hadn't heard during several weeks of practicing in my office. The sound is different in a different place, and I also listen differently.

I've used the approach of "training" notes to be in tune, and have had success with it, though I think ultimately it was the bassoonist, not the bassoon, that got trained.

Excellent post Betsy - I have always varied where I practised as I too found that different acoustics could make a significant difference to my playing. I've found in our current house the kitchen/diner is the nicest area to play in - good mix of hard & soft surfaces which give really nice acoustics.

You're so right about productive (vs. performance) practicing being a luxury. I often think of it that way. I'm glad that I'm not so busy that I never have time for productive practicing!

And I've been thinking a lot about your observation of training the bassoonist, not the bassoon, to play in tune..... maybe that's really what's going on, after all!

It's great that you have found an optimal acoustical spot in your house for practicing. Your comment made me realize that maybe my bedroom actually needs more soft surfaces. I'm off to experiment!

Great! I love your idea of choosing music that fits your instrument rather tyan forcing the instrument to fit the music.

I noticed your stand light in the photo is one of those light bulb models. Have you tried one of the latest LED music stand lights, like the Aria Lights one (www.arialights.com)? I just got one, and it rocks.

Keep on it, Betsy. Great stuff.

Thanks, Basso. I will try an Aria light!