For quite a while I have been wondering about the issue of how exactly to line up the bocal when assembling the bassoon.  Whenever I try someone else's bassoon, invariably I find that the other bassoonist places the bocal at an angle which is awkward for me and I have to turn the bocal to the right to be able to play on it.  I decided to analyze bocal placement to see if I should make an adjustment.

Bocal placement, the exact angle from which the bocal emerges from the tenor joint, may seem like an odd topic for a blog post.  However, it influences the manipulation of the left thumb keys.  Unless the player happens to have a very large hand, it can be nearly impossible to depress the high D key without accidentally depressing the low B flat key, and possibly also the low B key which automatically depresses low C and D.  That's not good, since the depression of any of those low keys alters the pitch and timbre of the high D.  The older Heckels don't present as much of a problem with left thumb reach, but the newer Heckels can be very challenging this way.  Other brands vary regarding left thumb reach, and of course the size of the player's hand is a factor.

I asked a colleague how he determines the angle of the bocal.  His answer was that he lines it up the whisper key pad with the nub on the bocal.  (When I lined up my bocal with the nub, it ended up being farther to the left than I normally place it.)  That seems logical, but look what happens as the whisper key is gradually closed: 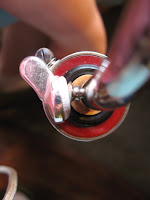 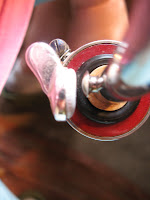 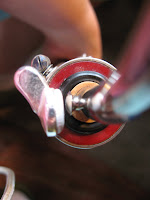 If the pad is parallel to the nub with the key open, the key closes at an angle, and the pad rests on the nub at an angle: 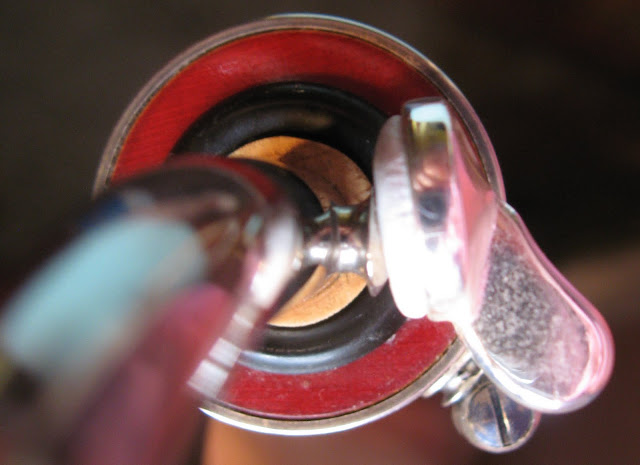 The bassoon can function like this, but I'd say that the above angle at which the pad hits the nub is not ideal,  not optimal.

So I turned the bocal slightly clockwise, to the right.  Now, the bocal looks like this with the whisper key open: 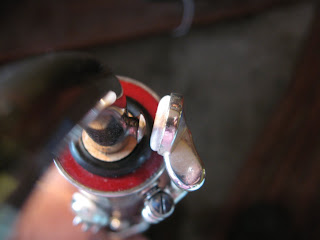 Because the whisper key rotates as it closes, it now closes perfectly: 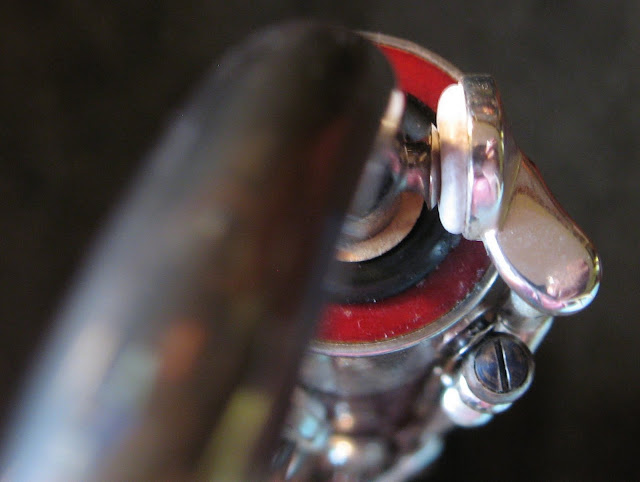 For years it had been my habit to line up the bocal with the high A key, so that it looked as if the end of the bocal lined up with the A key.  (I was instructed to do that by one of my teachers.)  On the other hand, most bassoonists seem to line it up with the high D and C keys, which is much farther to the left.  After the above analysis, I am now lining my bocal up so that the whisper key pad closes perfectly on the bocal nub, which means that I am now placing the bocal slightly father to the left than previously, and it looks as though the end of the bocal is halfway between the A and the D/C keys.

While this may not seem like a big deal, I am happy to report that this bocal placement has also created a playing position for the bassoon which maximizes unimpeded left thumb reach of the high D key.  Hmmmm....maybe the Heckel factory intended for it to be this way.

I've lined up my bocal in that way; between the A and C/D keys as you describe for years. I agree it's much more comfortable!

On a related topic: do you use the RH hand rest? Here in Honolulu all three of us don't use them. I've added a contra key guard for extra comfort!

Thanks for the comment- I was afraid this post would go over like a lead balloon! I should have said (and I might add this to the post now) that I lined it up with the A key because my teacher instructed me to, but I'm not sure which teacher said that. (If it was Van Hoesen, then I'd have to think there's a good reason for using the A key.)

I don't use the RH hand rest and when I was at Eastman, nobody did. None of the bassoons in this orchestra use them either. (My hand is too small anyway.) I don't have anything extra like a key guard but I've heard of other bassoonists doing the sort of thing you're doing with the contra guard.

I don't understand much about the details of lining up the bocal, but I like the detailed pictures. :-)

It's amazing how delicate our acoustical instruments are.

In this day of advances in design for everything, it's remarkable that we play instruments whose deigns have barely changed in 100s of years.

What a great post! Fantastic pics. I never realized how important bocal placement really is. As mundane as it might have felt writing, I think any music geek can appreciate the fine detail. I can't wait to try it out.

It really is hard to believe how little our instruments have changed in 100s of years! And I really appreciate your loyalty to this blog, even when the posts are so bassoon-specific.

I thought I was just being eccentric about wanting to always place the bocal just so. But my reason for lining it up with the A key was based on the orders of a teacher, and it was definitely time for me to examine whether my habit was based on what really works best. And the old habit is hard to break!

Thanks so much for the information! This helped me a lot since I always changed the bocal placement every time I played!