Yep, it's that time....it's time to sharpen the profiler blade.  In fact, it's been time to sharpen that profiler blade for a long time.  The great bassoon pedagogue Norman Herzberg, who designed and created the profiler I use, issued very clear instructions to me as I stood before him in his Encino, California garage/reedmaking studio: "This blade is to be sharpened after profiling 50 pieces of cane.  Got that?  Every 50 pieces.  That's non-negotiable."  And then he proceeded to show me exactly how it's done.

He painstakingly demonstrated the technique of rubbing the blade the length of the sharpening stone with the forefinger on top of the blade, with the thumb pushing the blade along the stone.  This was a new blade, so it didn't take long for a burr to develop on the tip of the blade, signalling that the blade was properly sharpened.  At that point the blade was to be flipped over and given a couple of light strokes on the stone to get rid of the burr.

Solemnly I promised that I would sharpen that blade without fail each time I reached my 50th piece of cane since the last sharpening, and that truly was my intention.  At that time I had no inkling of the sense of dread which would befall me each time I inched closer to number 50.  In fact, I found myself using my very finest denial techniques to avoid sharpening the blade.  For example, there was always the strong chance that somehow I'd botch the job, thereby ruining not only my profiler but also my entire (now reed-less) career.

I managed to convince myself that I was actually preserving the profiler blade by refusing to sharpen it.  After all, each swipe across that diamond sharpening stone removed microscopic material from said blade, right?  Sharpen it too many times, and it's gone.  That's pure logic.

Oftentimes, it's difficult to find the correct position for the newly reinstalled blade.  I rationalized that I wasted too many pieces of cane each time I sharpened the blade, since the only real way to know if the blade is in the right position is to actually use the profiler to profile a stick of cane.  If the profile turns out too thick or too thin, the blade height is adjusted accordingly and then another stick of cane is tested on the profiler.  And it's really difficult to get it right!  Many pieces of cane are sacrificed during the act.  Think of all the arundo donax being forced to make the ultimate sacrifice just so that I can sharpen my blade....

Finally I couldn't take it any longer.  I knew the blade was barely functional - its cutting power by this point barely rivaled that of a chunk of cardboard.  Worse yet, I was sure that Mr. Herzberg was rolling over in his grave due to the number of sticks of cane I had profiled since my last blade sharpening.  It was mainly my debt of gratitude to Mr. Herzberg that lifted me out of my state of inertia.  After all the years of research, experimentation and struggle he spent creating his state-of-the-art profiler, the least I could do would be to honor him by performing routine maintenance on the treasure he had bestowed upon me.

Thus the dreaded deed was undertaken.  Having convinced myself that the task at hand was stupefyingly difficult, I didn't dare approach it without my original notes which I had hastily jotted down in Mr. Herzberg's southern California garage. 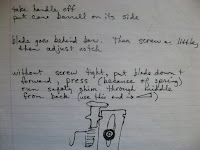 I re-read the notes, then got out the hex wrenches and diamond sharpening stone which he had given me, and then took photos of the profiler with both my camera AND my phone, in case the unthinkable occurred and I somehow botched the job.  I wanted to be able to see a picture of the profiler before I wrecked it., so that I'd stand a chance of putting it back together the way it was.  (I do this each time I sharpen the blade, as if I've never done it before.  Maybe it's good to always approach a task as though for the first time......I'm not sure.)


In yet another act of compulsive overkill, next I drew a diagram of the cutting head assembly, even though I already had several diagrams of that same cutting head in the notes I had just re-read. 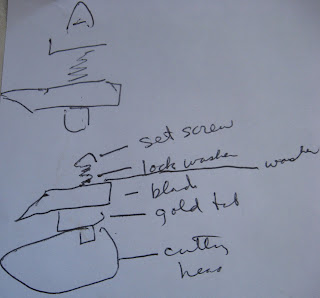 Then I unscrewed and removed the cutting head shaft handle, thereby clearing the way for the grand disassembly......

Finally I took the plunge, inserting the hex wrench into the set screw while turning the nearby knob for the notch.  Before I knew it, the hitherto-eschewed blade was in my hands, slippery like a fish out of water.  I saw that the edge was kind of shabby looking, slightly jagged.

Earlier that day I had received a pep talk from a bassoonist friend who understood my trepidation.  I had admitted to him that I had little confidence in my profiler blade sharpening skills.  I had elaborated on that theme, explaining that I had never really understood the "burr".  What the heck was a burr?  How did one know if the burr was there or not?  I myself had never experienced a burr, as far as I knew, and I had always given up on the elusive burr, flipping the blade over and giving it a couple of light strokes on the other side anyway, as if I had found a burr.

During this heart-to-heart with my commiserator,  I came to realize that it was my sense of guilt over my failure to produce the elusive burr that was blocking my profiler maintenance duties.  My friend assured me that it takes a long time to reach the burr phase, longer than expected.  It's not like sharpening a knife, I silently acknowledged.  It takes a long time to produce a burr on a hardened steel profiler blade.  Ah-ha.  I didn't know that.

So I stroked.  And stroked. And stroked some more.  No burr.  I was afraid I would damage my forefinger atop the blade during all of these strokes, as though my finger was being sharpened along with the blade.  I kept pushing that blade with my thumb, wondering how all of this friction could seemingly have no effect on the stubborn blade.  I rested.  Then stroked, stroked, stroked some more.  And tested the blade for the burr.  And stroked more.  And tested. 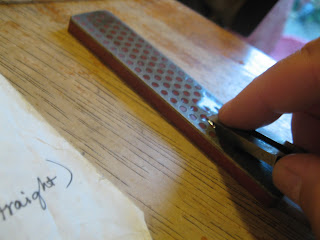 This went on for a long time, which was what my friend said was necessary.  I knew the blade was sharp, having accidentally cut myself on it, but still no burr.  And I kept stroking and stroking.
Finally, after what seemed like an hour or two, I sensed something different on the tip of the blade.  Could it be???  Was this a BURR???  I wasn't sure, but it was different, so I kept stroking with renewed enthusiasm and tested the tip again.  Yes, if it wasn't a burr, then it was some sort of alteration of the tip of the blade which was discernible to the touch.  And when I flipped it over and gave it a couple of light swipes as Mr. Herzberg had instructed on that hot, dry California day so long ago, the burr disappeared as though it had been but an apparition.
Could it be that this was the first time in my life I had experienced a burr on the blade?  I daresay it was.  When I reassembled the profiler and made the first reed with the sharpened blade, it was as though the machine was brand new again.  It worked like a dream, cutting that cane as though there was nothing to it.  Reedmaking could actually be a much more enjoyable activity, I thought, with such a well-functioning, well-honed machine cutting the reeds for me.....how much more satisfying could reedmaking possibly be?

In the interest of honesty, I must admit that I think the blade is a hair too low, meaning it's cutting a little too much cane off the reed.  But this profiler is like a racehorse given full reign to unleash its extreme strength, speed and competence.  If the reeds prove to be too thin, I'll move the blade up a bit tomorrow.  But for now, I bet Mr. Herzberg is smiling ear to ear.

I have sharpening jigs for both my Popkin and Rieger Profilers and Rieger Tip Profiler. Share your dread of sharpening the blade though. It seems like every time I have to remove the blade it is nearly impossible to replace it precisely. Jim Poe at Glickman-Popkin Bassoon Camp sharpened my Rieger Blade last summer and reset it beautifully. He doesn't seem at all intimidated by "the dreaded deed". Bob Williams made the Rieger Sharpening Jig, and George at Alfa Machining (Spartanburg SC..made the most recent Popkin Profiler) made the Popkin Profiling Jig....didn't the Herzberg come with a Jig for Sharpening? OBTW, Thanks for your blogs..at the very least I was inspired to get back to some reedmaking this morning..

Yes, I find it nearly impossible to replace the blade precisely also. I have never replaced the blade without considerable fussing afterwards to get it in the right position. The adjusting usually takes place over several days. As far as the sharpening jig, Herzberg's original 25 profilers didn't have jigs unless they were retrofitted with Herzberg's new template. I did not have my machine retrofitted, and I may very well be the only Herzberg profiler owner (of the original 25) who did not. I've often wondered if the sharpening jig would have made my life easier.

Thanks, Frank, for your much-appreciated kind words!