Although Prokofiev himself favored his Symphony No. 4, apparently not everyone does - it  is rarely performed.  Prokofiev said that he liked this symphony for its "subdued tone and wealth of material".  (Believe me, its tone is not completely subdued!) Sergei Prokofiev, one of the 20th century's great composers (the greatest in some musicians' opinion), often infused his music with a dynamic, life-affirming character, and Symphony No. 4 is no exception, ending in a blaze of C major glory.  This very lyrical symphony, based upon Prokofiev's ballet The Prodigal Son, was substantially revised by Prokofiev in 1947, and it was this revision which the Columbus Symphony recently performed under the direction of guest conductor Rossen Milanov.

This symphony's 1st bassoon part is quite colorful and exposed.  The 4-note figures beginning at 12 in the 1st movement dovetail with the same notes in the second bassoon part.  This passage must be played with extreme smoothness and tranquility.  Then at 13, the 1st bassoon plays an unaccompanied solo, continuing the smooth, tranquil quality established earlier.

Prokofiev's bassoon parts are often unusual clef-wise, with treble clef making frequent appearances.  But check out the 3rd note in the measure 3 bars after 49:

Another of the many exposed 1st bassoon passages begins the 3rd movement, in octaves with the 1st oboe: 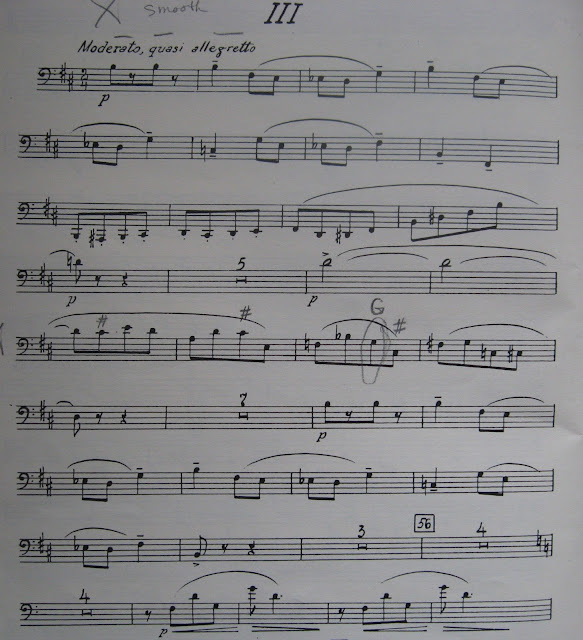 Attention to detail is very important in this piece.  Maestro Milanov asked the oboe and bassoon to play this opening in a style which might be described as smooth and graceful, yet scherzando-like and full of character.

Later in the movement there is another unaccompanied bassoon solo, beginning on high C (C5) written in bass clef:

The 32nd note scale in the 3rd measure below really threw me off when I first looked at it, and I had a hard time trying to play it!  Then I realized that it was the enharmonic equivalent of an E flat major scale.  Oftentimes I jot down the key in the part to help with the execution of a tricky passage, but in this case the enharmonic equivalent was more useful than the original key, for sure.

The passage at 8 measures after 70 is another unaccompanied bassoon solo:

This solo is best played very legato, with a full sound, watching the conductor for the huge slowdown (with diminuendo) into 71.

There were mistakes in my part in the following exposed passages, so if you play this piece, check your part for note mistakes.  The 1st section, before 90, is with the 1st flute and the next section is with the 1st oboe.  These passages are finger twisters: 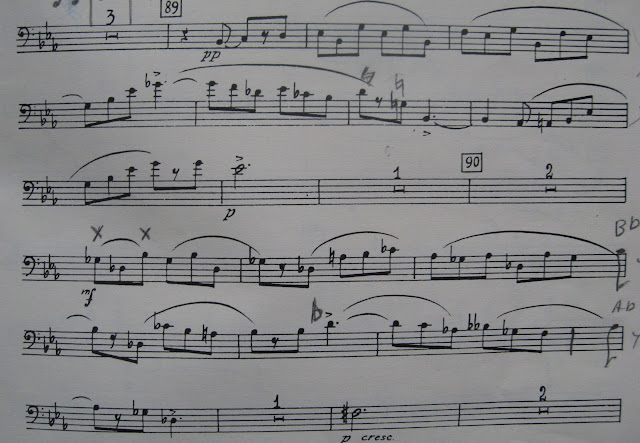 It takes a certain kind of reed to pull of the following sarcastic bassoon solo in the 4th movement (it's in 2 beats per measure, or one beat per measure for 2/4 or 3/4):

It really has to be played forte and should sound like a taunting, bratty child!   I chose a reed that had a really strong and reliable high C.  It has to cut through the orchestra.  The mocking bassoon outburst continues a few bars later, in B flat major and c minor.

I would say that Prokofiev had a vividly imaginative approach to his bassoon writing, especially in this symphony, and I am glad to have had the opportunity to perform it.

Wait, which F# key is alternate? I grew up with the pinky key being used for F#3, and the thumb key for F#2, unless dire circumstances required something different. I've recently being trying to use the thumb more often for the upper F#, to help smooth slurs to and from G# without sliding.

Good question! For you, the pinky F#3 must be "standard", while for many of us, it's the alternate. On many bassoons, that pinky F# is hard to reach, and therefor somewhat impractical. For me, the "alternate" (pinky) F#3 is becoming more "standard". I'm really glad that on my current bassoon, I can reach it fairly easily.