Thank heavens that Richard Strauss had a lifelong friend in Hugo Burghauser!  Burghauser was the principal bassoonist of the Vienna Philharmonic, and he was the reason Strauss wrote his Duet Concertino for Clarinet and Bassoon with String Orchestra and Harp.  The post-Baroque repertoire for solo bassoon with orchestra is....well...scant, so the Duet Concertino stands out as a late Romantic gem for bassoonists. Written when Strauss was 83,  the Duet Concertino fully embraces his late style of composition with its reduced orchestration and highly refined writing which pays homage to his beloved Mozart.

The first time I heard the Strauss (in a radio broadcast by a major orchestra), I was extremely disconcerted by the rhythms in the first movement.  I couldn't make rhythmic sense out of it!  Maybe that particular performance lacked accuracy, but even under the best conditions, the first movement of the Strauss sounds conflicting.  And it should!  As Strauss stated to Berghauser, the bassoon represents a bear who encounters a princess (represented by the clarinet)  The 1st movement meeting of the pair is awkward indeed, and seemingly ill-fated.

The piece opens with a clarinet solo (which David played with mesmerizing beauty).  Then the bassoon/bear enters in a lumbering fashion, in an ascending scale with grace notes:

During the Saturday night performance, I saw peripherally that a man sitting near the stage nearly jumped out of his seat.when the bassoon entered.  I thought to myself, "Good!  The bear has done his job!"  Right after that, of course, David evoked a shrieking princess, mirroring the man's reaction.

Next the bassoon/bear asserts himself soloistically for a while, and then the bear and princess engage in a rhythmically conflicting duet, part of which is shown below: 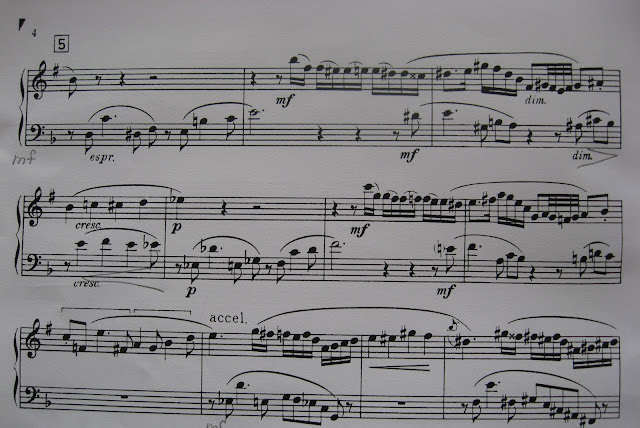 The slow movement is a tranquil romantic aria in which the bear woos the princess.  Although Strauss called for an Andante tempo, common practice is for it to be more like an Adagio.  This movement is a prime example of one which would benefit from circular breathing.  Clarinetist David Thomas used circular breathing, and I would have if I could have controlled the intonation.  As I have stated in prior posts, I am learning to circular breathe, but I have not yet progressed to the point where I can control the pitch.

The third movement is a dance between the now-enamored (assuming, of course, that the second movement was successful!) bear and princess.  It begins tentatively and ends full of joy.  Our conductor Jean-Marie Zeitouni always manages to find the right spirit of whatever we're performing.  For this movement he asked for a snappy tempo which, although a bit challenging to execute, was just right and led to a highly energetic performance.  (Most recordings sound way too conservative in this movement, I think.)

The entire piece is replete with technical challenges for the bassoon, many of which appear in the third movement.  This passage is one of the trickiest, especially at a brisk tempo:

I spent a lot of time slow practicing the last measure with various rhythms.  I found it to be beneficial to begin the passage with a calm and confident mindset, not surprisingly.

In the past, I have chosen to sit instead of stand when featured as soloist in front of the orchestra.  This time, I decided to stand.  Although it is harder to maintain the desired embouchure and finger control while the bassoon is suspended from a neck strap, shoulder strap, or harness, there are advantages as well.  The bassoonist looks and feels more like a soloist when standing.  Projection is enhanced by the increased distance from the floor.  Overall, I was convinced that standing would lead to a more effective performance.

When I was a student at Eastman, the bassoonists were being trained to be orchestral players rather than soloists.  We never stood.  However, I attended a recent recital by my teacher, K. David Van Hoesen.  Much to my surprise, he performed while standing (and circular breathing!).

In order to successfully perform the Strauss while standing, I tried many different types of harnesses, neck straps, and shoulder straps.  (Having tried balance hangers in the past, I didn't use one this time, which turned out to be a wise decision.  The balance hanger brings the bassoon too close to the player, in my opinion)  I ended up choosing the Wittman Spinstrap (shoulder strap):

Even with my chosen shoulder strap it was still a bit challenging to hang onto the bassoon during certain passages, like the ones below: 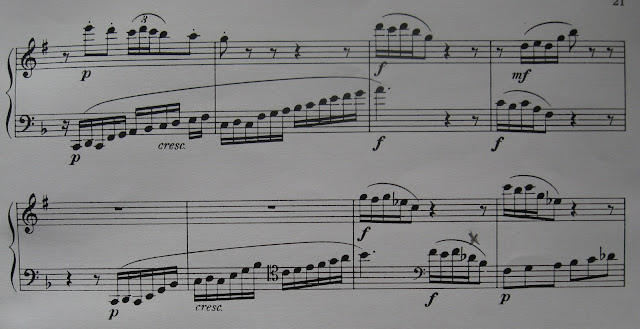 The bassoon moves around more when it is not anchored to a seat strap, so the player has to sort of hang onto it while playing.  That can lead to a sense of panic in passages like this.  It took me a while to figure out the obvious - that taking a calm approach worked much better.

Near the very end of the Duet Concertino, the clarinet, in the middle measure below, ascends in a rapturous scale:

It seems that the princess has adopted the bear's original stumbling ascending scale!  Now it's smooth and triumphant, and everyone lives happily ever after.

It's daunting for an orchestral bassoonist to suddenly step out in front of the orchestra as soloist, no question about it.  But it's also thrilling beyond words.  I can't wait for the next time.

I was able to atted Friday night's performance and this was one of my favorite "Dialogue" pieces on the program. You both did a beautiful job!

Thank you, violinista! I'm glad you were there. Thanks for supporting the Columbus Symphony!!