Playing the bassoon in an orchestra 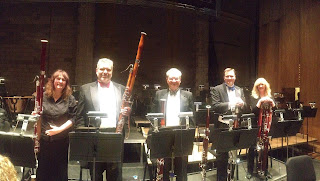 If you are a student or amateur musician who is playing in an orchestra and no one has advised you on the unofficial "rules" of orchestral playing, then this post is for you.  I had the opportunity to hear an amateur orchestra rehearse recently and it struck me that the bassoonists and other woodwind players could have used a few pointers to enhance their orchestral playing experience.

During the rehearsal I heard the conductor (who was apparently inexperienced) instruct the wind players to go with what they heard from the piano soloist instead of watching his baton.  That piece of advice contradicts my experience in the halls I've played in.  In fact, if the winds go with what they hear from a soloist in front of the orchestra, those wind players will end up lagging behind due to the distance between the soloist in the front of the stage and the position of the wind section.  Light travels faster than sound, so the visual guides (such as watching the conductor's baton or the movement of the string bows) are actually FAR more reliable than the aural guides, in situations where the winds or bassoons are on their own, trying to play with a soloist.  However, when the entire orchestra is playing OR if players beside or in back of the musician are playing---then the sound IS reliable.  For example, a bassoonist can listen reliably to brass or percussion player situated behind the bassoons or clarinet players beside the bassoons.  But it is not helpful to use the sound of a musician (or a section, like the first violins) located in front of you at a great distance, because your ears are hearing a delayed sound.  You'll be lagging behind!

This was probably the most difficult orchestral lesson I had to learn when I began playing principal bassoon in the Columbus Symphony.  While I was a student at Eastman I was fortunate to have the experience of playing second bassoon in the Rochester Philharmonic.  That was much easier because I was following the principal bassoonist, and the delay described above was his problem, not mine.  I wasn't even aware of the issue!  But once I began playing principal in Columbus I was constantly being told that I was behind until one day I asked for advice from a percussionist.  He told me to go with the conductor's baton.  Since then, I've been fairly conscientious about playing right on top of the conductor's beat, and the problem has been greatly alleviated.

Pay attention to your rhythmic accuracy.  Subdivide.  Watch out for coming off of ties (many musicians hold the tie too long due to failure to subdivide).  Don't play dotted eighth and sixteenth figures like triplets (again, subdivide).  Be aware of the very human tendency to rush.  (Practicing with a metronome really does help with that!)

Listen closely at all times to the other players so that you're able to match the style, volume, note lengths and articulations.  Good orchestral players are good listeners, as though they're playing chamber music.

Whenever you have a passage which has already been played by another musician before you, it's your job to match whatever that other musician did (even if it was distasteful).  I learned that from conductor David Effron at Eastman and that concept has been confirmed by many conductors since then.

These days many musicians practice with tuners.  Your orchestral playing will be enhanced by this, especially if you practice with a sound drone instead of a meter to develop a solid habit of listening for intonation.  For bassoonists especially, it's wise to check in occasionally with the visual tuner (instead of the tuning drone) just to be sure.

When playing a chord in a wind section, do not use vibrato. (Tuning is challenging enough without introducing vibrato into the mix!)  Chords in a wind section are best  tuned from the bottom up, which usually means that the wind section uses the second bassoon pitch as its reference . When playing passages with oboes or flutes (especially flutes), use vibrato as they do.  No vibrato is used when clarinets and bassoons are playing exposed passages together, since clarinets do not use vibrato.  The same is true for playing with horns.  Generally, vibrato enhances projection and is often used liberally for bassoon solos.  But in any passage where your goal is to be discreet or innocuous, it's probably best to leave out the vibrato.

The bassoon is the chameleon of the orchestra, having the ability to blend with any other instrument quite well, using our various tools of vibrato or lack thereof, dynamics and articulation.  It is also the quietest instrument.  When a bassoonist has a unison solo with another instrument (such as the horn), I have found that it's best to defer to the other instrument rather than attempt to assert my own sound.  That results in a better blend.  That also helps with matching the intonation, because if you're playing too loudly, it becomes much more difficult to hear the pitch of the other player(s).

Learn the music before the first rehearsal so that you know where your entrances are and where you'll be exposed.  That includes listening to recordings and studying scores so that you'll know how your part fits into the orchestral texture.  Don't be afraid to mark you parts with helpful information.  The first time you make a mistake, such as playing a wrong accidental, should be the last.  Mark it with a pencil to ensure that it won't happen again.  Learn to anticipate where you might be likely to play a wrong note, and mark it in advance.

Finally, there are a couple of etiquette rules.  Be very, very careful when walking near instruments on stage.  I usually go out of my way to avoid walking anywhere near an unattended instrument (whether it's in an instrument stand or laying on a chair).  Also, try to resist the urge to turn to look at other players while they're playing (or after they finish).  When considering approaching other wind players about ensemble or intonation issues, be aware of the benefit of choosing one's words very carefully!  Whenever a musician seated near you (especially beside you) is playing a solo or exposed passage which does not include you, it’s your job to FREEZE!  The last thing you want to do is distract another musician when they’re in the hot seat.  (With any luck, your woodwind neighbors in the orchestra will return the favor when it’s your turn to solo.)

Once you've prepared as thoroughly as you possibly can, you've earned the right to just show up and enjoy the experience!   Listen to the music as it unfolds and play your part with total commitment.

Never though much about vibrato for bassoon but it makes a lot of sense.