What Elvis taught me about bassoon reeds 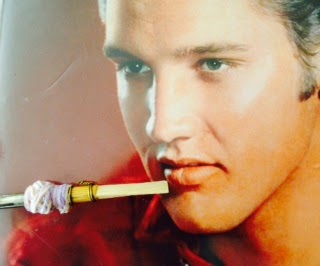 This past week I had the privilege of performing Michael Daugherty's Dead Elvis on the Columbus Symphony's classical subscription series. What an experience it was!

Last night when I returned home following our final performance of Dead Elvis, I put my bassoon together and pulled out the reed I had used. Unaccustomed to soloing in front of the orchestra, I had been a bit more uptight about my reeds than usual. The reed I had used for the performances was pretty reliable, but I found that during the performances, the reed tip closed a bit due to the high temperature onstage and the dryness of the air, I think.  Now that the performances were finished, I had to satisfy my curiosity about the reed. Would the reed have responded well to having its tip opened slightly?

Normally the first thing I do when a reed tip closes is simply pull out the pliers, place the reed on a mandrel tip, and nudge the reed's tip open a little by gently squeezing the top wire at the sides. This simple procedure often gives the reed more fullness of sound throughout the range and enhances the reliability of the attacks of high notes such as the high D# at the end of Dead Elvis. A proper tip opening even allows for better control of the vibrato.

But things are not normal when a bassoonist is suddenly thrust into the spotlight. I lost my head, and decided that opening the tip of my reed would be too risky. (?????) As a result, I was uncomfortable with my reed throughout the performances, and I always had the sense that it could have been more ideal. The reed was OK, but could have been better.

My post-Elvis reed tip opening experiment was a revelation - the reed transformed from a pretty impressive one to an absolute dream-come-true, after just barely opening the tip with pliers. Too bad this magic occurred after the final concert!

I always tell my students not to be afraid to change the tip opening of a reed, explaining that it's the only reed alteration which can be reversed, and oftentimes the result of tip opening adjustment is that a mediocre reed becomes a good one. It's the easiest and most effective means of improving a bassoon reed. Why hadn't I heeded my own advice?  I guess I was so daunted by the concept of being a soloist, of being Elvis for heaven's sake, that my bassoon reed knowledge and experience flew out the window. Also, I had the notion in my head that since I had been playing such a taxing piece as Dead Elvis on the reed, I thought maybe I had worn out the reed, causing it to lose its flexibility to respond to wire adjustment. I thought that if I opened the tip and then wanted to change it back, the cane might not respond to the reversal. Now I think that's hogwash, since the reed responded so beautifully to having its tip opened.

The reason I'm kind of mad at myself about this is because I spent months searching for the ideal Elvis reed. I rejected literally hundreds of reeds. The Elvis reed had to excel in the extreme high range AND extreme low range AND double tonguing AND it had to play in tune AND it had to clearly articulate high D# (4th line treble clef). If you're a bassoonist, you know what a tall order that is.

My chosen reed was a darn good one which would have been even better if I'd taken the risk (which is not really a risk at all since it's reversible) of slightly opening the tip.

Let that be a lesson to us all.